EDITOR NOTE: Between the two--gold and silver--the latter has been a real sleeper. It’s largely gone unnoticed and mostly avoided during the period leading up to 2020, gold taking the spotlight. Smart money knows that undervalued assets with strong fundamentals are key to outsized gains. And with that principle in mind, silver’s been getting a boost--300% rise in demand year over year, and 65% demand growth in the first three quarters of 2020 alone. The two countries driving silver demand: US and Germany. Silver is still undervalued at its current price levels, making it a smart and timely investment.

(Washington, D.C. – October 15, 2020) Investors sought security in silver-backed Exchange-Traded Products (ETPs) in the first nine months of 2020, nearly tripling the amount amassed compared to the comparable period in 2019. Investors have also had a strong appetitite for investment in silver bullion coins and bars during the first three quarters of this year. Overall, this reflects both silver’s role as a safe haven asset and as a leveraged play on gold, as some investors expect silver to outperform the yellow metal.

Global silver ETP holdings rose by 297 million ounces (Moz) through the third quarter of this year, nearly tripling the growth in the comparable period last year (297 Moz v 103 Moz). ETP holdings through the end of September stood at 1.026 billion ounces (Boz), slightly off the high of 1.052 Boz recorded in August. Global ETP holdings are on the rise again, and as of October 12, totaled 1.045 Boz.

Globally, silver bullion coin demand is up strongly, with a 65 percent increase in demand over the first three quarters. This was due to strong sales in the two key bullion coin markets, the U.S. and Germany, with both seeing substantial double-digit gains over the first nine months.

Silver bar demand has also risen sharply this year, led again by the U.S. and Germany. This growth has been partly offset by weaker demand in India, particularly in recent months where price-led liquidations have emerged. 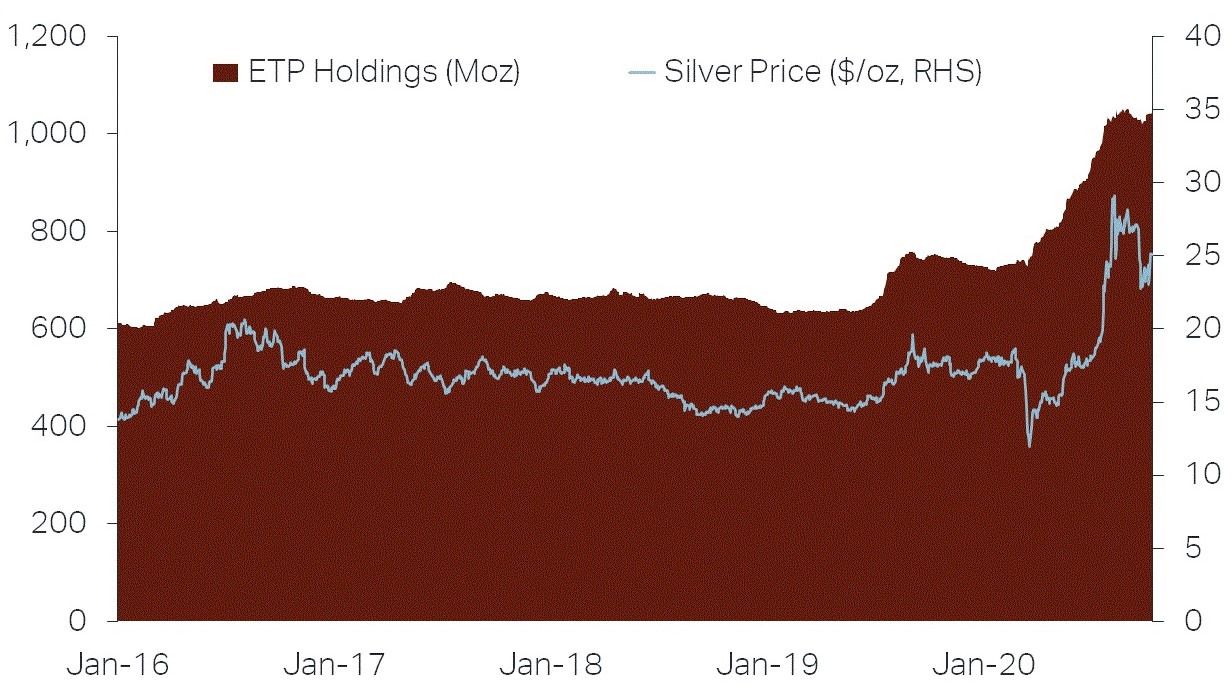 There were indications of a partial recovery in global industrial demand during the third quarter. Going into the fourth quarter, this has gained further momentum, with several key economies emerging from mandated COVID-19-related shutdowns. Even so, and entirely as a result of the COVID-19 pandemic, silver industrial offtake is forecast to soften this year by around 10 percent year-on-year.

Looking at the sector in more detail, silver’s use in photovoltaics has been robust this year. While some projects were delayed in the first half of 2020 due to lockdown measures, many are being delivered in the second half. Finally, silver-bearing electronics in the automotive segment have struggled this year due to weaker car sales.

Unsurprisingly, the pandemic is having a protracted impact on global jewelry demand, which is expected to drop by around 20 percent this year and perhaps to its lowest level since 2012. Losses are widespread, but most significantly in India and across East Asia.

The macroeconomic backdrop should continue to underpin silver investment demand for the rest of 2020. Dramatic monetary easing policies and fiscal stimulus measures seen in several key markets, and potentially again in the U.S. before the end of 2020, could boost inflationary expectations and weigh on the U.S. dollar, continuing to raise the appeal of safe haven assets, including precious metals.

More importantly, should the rally in gold resume later this year, silver’s high beta relationship with the yellow metal is likely to encourage aggressive tactical buying. This could result in the silver price rebounding to the $30 threshold, and sending the gold:silver ratio toward the 70:1 level.