EDITOR NOTE: To say that silver is the “poor man’s gold” is to say there’s a choice. Either you can afford gold, or you can’t and are “stuck” with gold’s second. When demand-pull causes gold to rise, silver may or may not go along for the ride. Up until recently, silver stayed low. But now it may be a “cost-push” scenario. Silver supply chains are in a wreck while supply itself remains relatively low--all of this, at a time when there are very few attractive alternatives for safe haven investments. Hence, it appears that a long-term silver bull market may have begun. Silver's 2nd Quarter performance timestamped a 30.28% increase and the CME group shows open interest of 140,253 contracts for September delivery, that's 701,265,000 ounces! 701 Million ounces of silver is almost double all of the Eligible & Registered inventory in the US combined. Got Silver?

The best silver could do was poke its head above $19 an ounce and then, seeing its shadow, run back into its burrow for another year. Its long winter wasn’t quite over yet.

But that seems to be changing with silver’s rally since March. It has been steadily gaining on gold and over the past two weeks, since the beginning of the third quarter, it has put in an impressive performance, finally showing the technical strength to warrant taking a look as an investor.

In fact, Money & Markets Chief Investment Strategist Adam O’Dell recently recommended a couple of silver plays as part of his Green Zone Fortunes service that are already up 16% to 22%.

He also has a few precious metal plays in addition to other top stock recommendations, and plenty more on the way. Click here to learn more about his strategy and how to subscribe to this reasonably priced premium research service that could help add tremendous returns to your portfolio.

Last week’s push to close above $18.50 (cash basis) was significant as silver made both a new intraday high for 2020, but then closed at its highest price so far this year at $18.795 an ounce(see chart below). That set up the follow-through action we’ve seen this week, with silver capturing $19, seemingly no longer afraid of it. 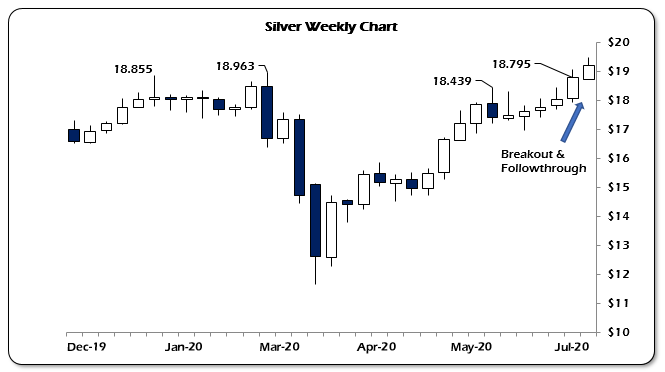 Holding at $19.20 for a few days this week means the bulls have the bears on the run. They are comfortable letting the bears set up shop at the next resistance level, waiting to force them to cover and retreat higher.

Coming back to what I opened with, the split behavior that’s existed between the two metals highlighted the fundamental changes coming over their respective markets. Both gold and silver are no longer primarily monetary metals.

The industrial uses of silver are far and wide, as a conductor, soldering dopant or antibacterial, to name a few. So today, silver has as much commodity value as monetary value — if not more.

I’m not surprised silver has lagged gold. In fact, I’ve expected it and this lag confirms my long-held thesis that the days of silver acting as poor man’s gold are numbered.

And as confirmation of this, silver’s impressive performance over the past couple of weeks has coincided with gold puttering near $1,800, stopped for the time being.

Meanwhile, silver has broken out technically alongside the king of the commodity metals, copper.

Like silver, copper has put in an impressive rally off its March low from just under $2 a pound to challenging $3 earlier this week. The long-term copper chart had a clear resistance level at $2.89 per pound, which has been violated to the upside. A close this week above $2.89 in copper is a significant event (see chart below). 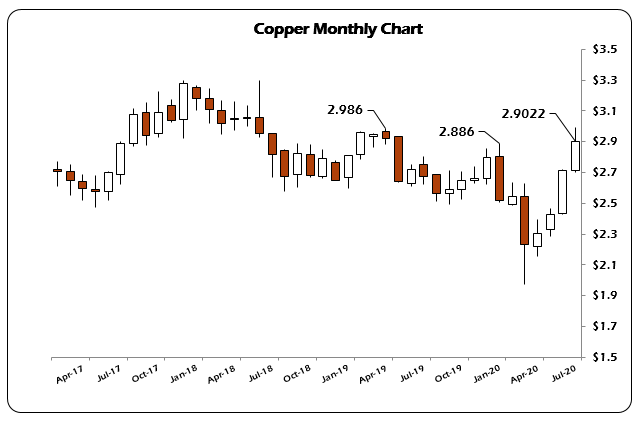 Copper and silver may both be reacting to a reflation trade unfolding in the general markets. It seems we can’t go 48 hours anymore without some hopium being pumped into traders’ veins regarding a successful COVID-19 vaccine.

This is patent nonsense designed to sell the narrative that COVID-19 is the proximate cause of our economic dislocation. The concerted political response to the virus exacerbated an economic crisis that was unfolding thanks to the crash in oil prices, and the subsequent seizure of dollar-funding markets the world over.

And today, there is an informational war happening to keep COVID-19 relevant politically to hurt President Donald Trump’s reelection prospects by delaying normalizing economic activity. That observation shouldn’t even be debatable in informed company at this point.

Rise of Silver, Copper Is a Warning of Rapid Changes

But the narrative of a V-shaped recovery is running flat-out into the narrative of a second wave of the virus. And with the insane amount of money being pumped out by central banks all over the world, markets simply don’t make a whole lot of sense given just how bad things are.

So the reflation sentiment is a very real effect on the recent behavior of equity markets. And with economic data that can be spun as improving also comes lower dollar liquidity stress, as seen in the Fed’s weekly balance sheet report.

For the first time since September, the Fed reported zero outstanding repurchase agreements as assets last week. Central bank liquidity swaps are down to $154 billion from over $450 billion in the middle of June.

That as much as anything else is what I think is driving this equity rally, taking the strategically important metals like copper and silver along for the ride. It’s also why gold is struggling to maintain $1,800 an ounce, and also why Bitcoin has become boring at around $9,200.

But what may actually be lurking in the background is the specter of cost-push inflation, not demand-pull. The financial press is obsessed with talking the stock market higher on the hope that Keynesian stimulus policy will actually work for once.

This is demand-side thinking.

However, the more likely scenario is that while we may have a mild uptick in commodity demand with the reopening of the economy, that shouldn’t push prices back above significant technical levels, all things being equal (which of course they never are).

I’m more worried that this uptick in demand is coming while supply chains are still in disarray, and that actual shortages are beginning to push prices higher. And that is the scarier thought, especially as Trump pushes China to the brink of a wider economic — and potentially kinetic — war.

Regardless of what we think is driving these markets at the margin, the fact is they are moving the way they are and that is significant. Silver and copper moving into new, higher prices zones warns that something is changing rapidly.

And it may not just be as simple as print money, create inflation.