Soaring Cost Pressures are Bleeding Through to Consumer Prices

EDITOR NOTE: The labor shortage is one of the primary factors that give the Fed enough justification to maintain its position on monetary easing. Slack in the labor force can help relieve inflationary pressures. Meanwhile, the PPI has seen a tremendous rise in input costs (the cost of production). According to the article below, there are plenty of indicators that point toward the likelihood of a rapid inflationary shift. The labor segment, one in which wages would have to be increased to attract a viable workforce, may be one of the last pieces to complete the inflationary puzzle. Eventually, the rise in costs will find its way to the consumer. That’s not the main point of concern. The big concern is whether the Fed will be able to keep a lid on it. It’s reasonable to say that perhaps we don’t want to find out the answer without hedging the outcome by purchasing physical non-CUSIP gold and silver. It’s like Pascal’s Wager--if you take a pessimistic or merely prudent view and you’re wrong, you still end up holding sound money assets (a win). But if you’re right, your sound money not only preserves your wealth but increases as inflation eats away the purchasing power of the unhedged (another win).

One doesn't have to go too far - a trip to the local gas station, grocery store, or restaurant should suffice - to observe how soaring commodity prices and other costs are bleeding through to the consumer. And it's only going to get worse: Procter & Gamble, Kimberly-Clark and Coca-Cola have publicly discussed lifting prices, citing rising commodity costs and manufacturing expenses. P&G and Kimberly-Clark’s higher price tags for everyday items like toilet paper and tampons are the first in about two years, as the trade war unfolded, further adding pressure on raw materials.

Cost pressures are certainly appearing in company earnings commentaries: while it is still early on in earnings season (less than 10% of S&P 500 companies have reported), Morgan Stanley notes that cost pressures have emerged as a prominent topic of discussion. This development is corroborated by a number of macro data points which suggest that a range of expenses are on the rise.

Such surging cost pressures have been best captured by the record prices prints in PMI survey data. The NFIB Small Business Optimism Survey also indicates that companies intend to raise prices in response to these cost pressures. With a strong, demand-led growth environment, Morgan Stanley's Micheal Wilson writes that many companies will ultimately look to pass along price, but on a more near-term basis the strategist is watching how stocks trade as cost pressures impact results relative to expectations.

The charts below that PPI growth is accelerating both for final demand and intermediate demand goods. This acceleration is particularly acute for unprocessed goods, which tends to be a volatile series, but is an important indication of early stage supply chain cost pressure. Additionally, transportation costs (particularly trucking costs) and energy costs are also on the rise. 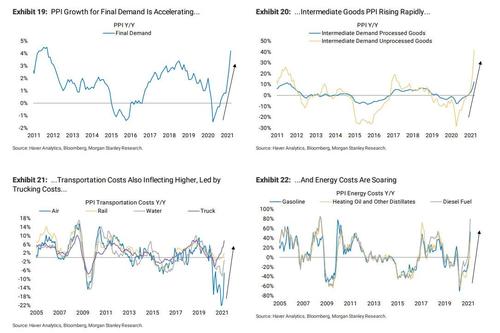 Beyond input and raw material cost pressures, we recently showed that companies - especially small and medium businesses - are having a difficult time filling jobs. The NFIB Small Business Survey: Percent with Jobs Not Able to Fill Index is at historical highs, indicating labor shortages - a trend being driven by expanded unemployment benefits and fiscal stimulus directed at consumers. This labor shortage series (blue line) tends to trend closely with the NFIB Survey's sub series on higher worker compensation. Interestingly, a divergence has formed over the past year between these two indicators. As such, Wilson would not be surprised if the higher worker compensation series caught up to the labor shortage series as corporates are forced to raise wages in order to bring workers back. 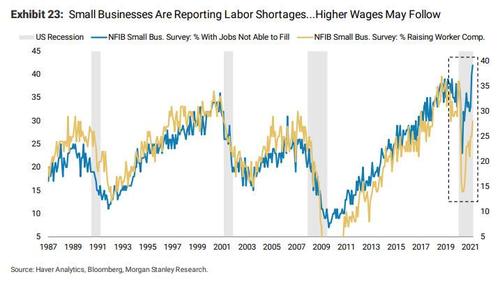 The next chart reveals that companies intend to respond to higher costs by raising prices even further. It shows the Percent Planning to Raise Prices series from the NFIB Small Business Optimism Index. This indicator has surged higher and is now near historical highs! 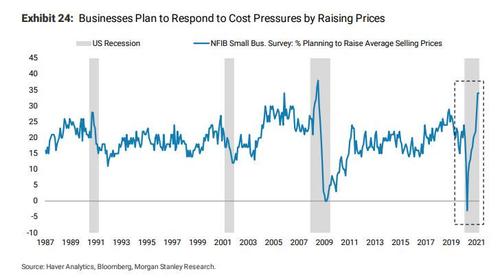 Given the broad range of accelerating cost pressures, it is not surprising that corporates have been discussing rising expenses in recent weeks (see a select list of corporate commentary on this subject below). Expect a continuation of this trend through 1Q earnings season and well beyond.

Below is a list of companies focusing on surging costs:

Finally, yesterday morning consumer products giant Procter & Gamble said that this fall it will will start charging more for household staples from diapers to tampons, the latest and biggest consumer-products company to announce price hikes. The maker of Gillette razors and Tide detergent cited rising costs for raw materials, such as resin and pulp, and higher expenses to transport goods, the WSJ reported.

The announcement, which came as P&G disclosed its quarterly financial results, follows a similar move last month by rival Kimberly-Clark, maker of Huggies diapers and Scott paper products, which said its percentage increases would be in the mid- to high-single digits and take effect in late June. They will apply to the company’s baby- and child-care, adult-care and Scott bathroom tissue businesses.

“It’s a different situation, as everywhere in the world countries are in very different places as far as coming out of the pandemic,” operating chief Jon Moeller said in an interview. "There is very strong consumption across the board."

The last time big consumer-products companies raised prices significantly because of materials costs was 2018, when surging pulp prices drove up the cost of diapers, toilet paper and other products. Those prices were not reduced subsequently even after pulp prices dropped.

Several food makers have raised prices as well. Hormel Foods Corp. said in February that it raised prices on its turkey products, such as Jennie-O ground turkey, in response to higher grain costs. J.M. Smucker said it recently raised prices for its Jif peanut butter and that it might do the same with pet snacks because of higher shipping costs and other inflationary pressure.

In short, the inflation that the Fed is convinced is supply-driven and thus - transitory - is in fact, shifting to the demand side, as consumer are just buying more. And prices hikes by the likes of P&G suggest that inflation is here to stay for a long time for one simple reason: once companies raise prices they never lower them again.