EDITOR NOTE: Remember what triggered the 2008 financial crisis? It was oversized and unchecked leverage in the housing market. Leverage that multiplied as toxic mortgages were bundled together with sound mortgages and speculated on with more money than most institutions had to remain solvent. Taxpayers ended up bailing out the big casino game that world institutions played and blew up. Right now, excess leverage in the stock market is up to a historic high of $847 billion. That’s the “known” figure. Many of these are your regular retail investors. What this means is that nobody has a clue as to how much more leverage hedge funds and other large financial institutions are holding. We’re seeing just the tip of the iceberg. The real picture is likely much worse. If you hold a large stake in the stock market, and if you remain unhedged with no safe-haven assets, then you’re lighting a match in a room filled with barrels of jet fuel, some of which are open or leaking. A blow-up may ensue, or not. But if you value your wealth, you wouldn’t want to take the risks for granted.

Excess leverage is the precise and predictable result of the policies the Fed is promoting out of one side of its mouth with its interest rate repression and asset purchases.

Out of the other side of its mouth, the Fed – via its blissfully ignored Financial Stability Report – is warning about leverage, stock market leverage, and particularly the vast and unknown parts of leverage among hedge funds and insurance companies.

It named names: The family office Archegos, a private hedge fund that has to disclose very little, and that then blew up because none of the brokers providing it with leverage knew about the other brokers also providing leverage, and no one knew how much total leverage the outfit had. The amount of leverage didn’t come out until it blew up.

And this form of hidden leverage is not included in the known stock market margin debt reported monthly by FINRA, based on reports by its member brokerage firms.

This known stock market leverage is an indicator of the trend in leverage, the tip of the iceberg. History shows that a big surge in margin balances preceded and perhaps was a precondition for the biggest stock market declines.

In April, it exploded to a new WTF high of $847 billion, up by $188 billion in six months, having ascended to the zoo-has-gone-nuts level: 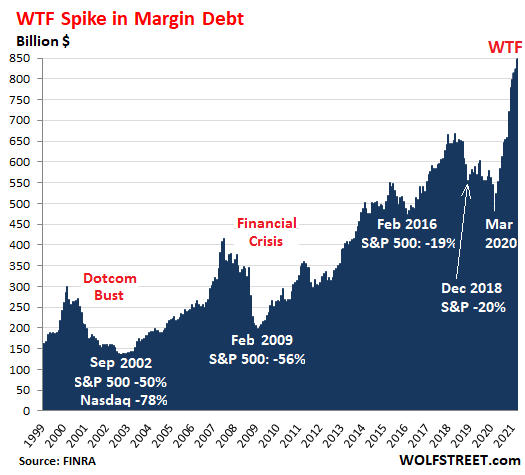 In this type of chart that covers two decades during which the purchasing power of the dollar has dropped, long-term increases in absolute dollar amounts are not the focal point; but the steep increases in margin debt before the selloffs are.

Leverage creates buying pressure and drives up prices. As prices rise, the collateral can be leveraged up further, and leverage builds with rising asset prices. And then when prices decline, the leveraged bets are sold to pay down the debt, and the selling triggers more price declines, and forced selling sets in. This is when Archegos blew up.

And so the Fed says in its Financial Stability Report that “measures of hedge fund leverage are somewhat above their historical averages, but the data available may not capture important risks from hedge funds or other leveraged funds.” And it recounts the Archegos fiasco, in terms of how this hidden leverage works:

“In a separate episode in late March, a few banks took large losses when a highly leveraged family office, Archegos Capital Management, was unable to meet margin calls related to total return swap agreements and other positions financed by prime brokers. Price declines in the concentrated stock positions held by Archegos triggered the margin calls, prompting sales of the stock positions, which led to further declines in the prices of affected stocks and, ultimately, substantial losses for some banks.”

“The episode highlights the potential for material distress at NBFIs [Nonbank Financial Institutions such as hedge funds] to affect the broader financial system,” the Fed’s report said.

It’s ironic that the Fed, out of the other side of its mouth, is warning about the results of its policies, including the ballooning leverage that isn’t known until it blows up.

Ha, and then says the Fed, still speaking out of the other side of its mouth, if that risk appetite declines “from elevated levels,” and outfits want to get out from this leverage, or are forced to get out from under this leverage, “a broad range of asset prices could be vulnerable to large and sudden declines, which can lead to broader stress to the financial system.”