EDITOR'S NOTE: The new omicron variant has contributed to a major labor shortage in an industry that’s critical to daily existence: grocery stores and supermarkets. With the variant’s rapid spread characteristics, many grocery workers are either out due to infection or they’re calling in sick to avoid exposure. While stores are hiring new or temp workers to replace their regular employees, the pace of hiring may not match the rate at which employees are abandoning their posts. Some workers are even going on strike demanding higher wages; a seemingly reasonable request considering the rightful compensation of risk (particularly for those who, for personal reasons, can’t or refuse to get vaccinated). How might this labor shortage impact the chain of supplier revenues; and if you add wage increases to the mix, how might all of it affect consumer prices in the coming months? As a labor union rep, quoted in the article, says, “If it continues, it will definitely create a bigger issue than we already have.” We can take this line to reflect not only workers’ interests, but those of the vendors and consumers as well. 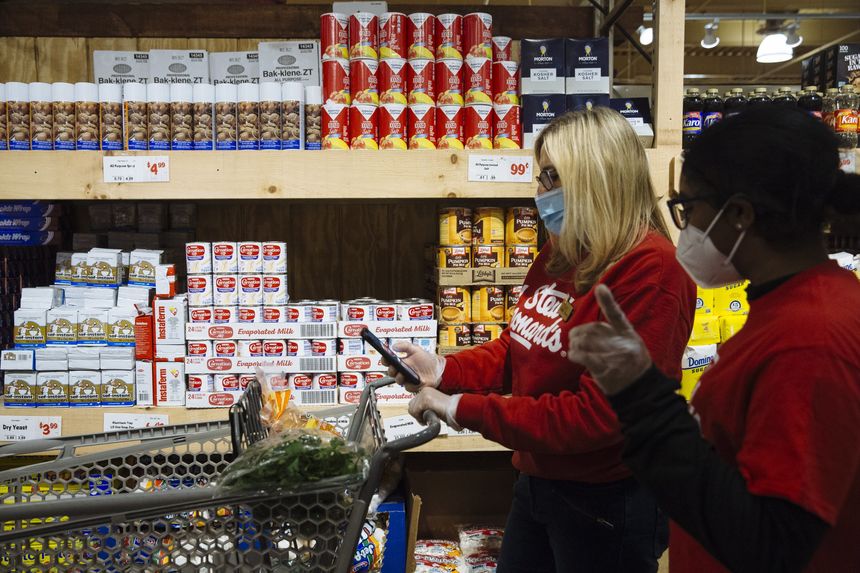 Covid-19 cases surged among Stew Leonard’s supermarket-chain workers in the Northeast over the past month. PHOTO: ANGUS MORDANT/BLOOMBERG NEWS

Across the country, supermarket workers are calling out sick after contracting Covid-19 or getting exposed to the virus, executives and employees said, prompting retailers to manage operations with fewer workers, while shopper demand for groceries remains high. Some grocers said they are hiring new employees, using temporary employment agencies and overscheduling available staffers to keep stores open, though some said they worry about continued pressure on their workers.

The chain, which runs locations in New York, Connecticut and New Jersey, has reached a 90% employee-vaccination rate, Mr. Leonard said. But Covid-19 cases surged over the past month: The week before Christmas, Stew Leonard’s had around 30 of its 3,000 employees in quarantine or isolation, according to the CEO. By Dec. 26, it was 100, and last Thursday, the company was missing over 200 employees to Covid-19 infections and exposures.

“We sort of feel like we’ve got to buckle down for round two,” Mr. Leonard said.

Giant Eagle Inc. has avoided closing any of its approximately 470 stores during the Omicron surge by adjusting hours and sending staff from its corporate office near Pittsburgh to help fill in at supermarkets, according to Vic Vercammen, the company’s chief compliance officer, who leads its pandemic response. The regional grocery chain has seen a rise in employee Covid-19 cases that mirrors the area’s case numbers, he said.

At Piggly Wiggly stores in Alabama and Georgia, managers are overscheduling workers under the assumption that some staffers aren’t going to make it in, said Keith Milligan, the controller of the 17-store chain. The company, which is a franchisee of New Hampshire-based Piggly Wiggly LLC, has also hired people from temporary agencies to work in its warehouses that receive and store products before they reach the store shelves.

Supermarkets have struggled with hiring and retaining workers during the pandemic. Executives have said unemployment benefits and federal stimulus checks made it harder to find people willing to work at their stores. Some executives and store workers have said fears of working in public and potentially spreading or contracting Covid-19 are keeping potential employees out of the job market. Employee advocates have said that even with government payments, many hourly workers are still struggling.

There were a near-record 10.6 million job openings at the end of November, according to preliminary Labor Department data, including over one million in retail stores. Union leaders have pointed to attrition and a lack of steady replacement in the high-turnover food industry.

Harris Teeter supermarkets, owned by Kroger Co. and operating primarily in the U.S. Southeast, said recently that most of its stores will close an hour earlier at 9 p.m., effective Jan. 10, so employees can restock shelves, clean stores and better prepare for the following day. The company said the decision wasn’t made because of staffing shortages, but to give workers more time to restock and clean stores.

On Wednesday, about 8,400 unionized workers at Kroger’s King Soopers stores in Denver went on strike, pushing for higher wages and expanded benefits. The company called the move reckless, and said it hired temporary workers to help staff stores.

Fresh Encounter Inc., a 100-store supermarket chain based in Ohio, has been closing most stores at 10 p.m. over the past three months, versus operating 24 hours a day before the pandemic, to accommodate for staffing shortages.

In recent months, most of the chain’s deli departments have been shutting down at 5 p.m., compared with 9 p.m. to 10 p.m. previously, because more than half of the company’s deli team has been out sick, said Michael Needler Jr., the chain’s chief executive. Fresh Encounter is selling fewer items that require hands-on labor, such as store-made chicken salad and certain varieties of meat cuts, he said.

“The staffing situation started out very tenuous,” Mr. Needler said. “Layering in Omicron vacancies on top of that makes it very, very stressful.”

Industry executives said new guidance from the Centers for Disease Control and Prevention, allowing some people to return to work after five days of isolation, has helped staff shortages. At supermarkets, executives are pushing employees to get vaccinated and boosted, as well as raising mask-quality requirements and re-implementing some early-pandemic cleaning routines.

In New York state, where the daily average for Covid-19 cases has quadrupled its previous high from last January, United Food and Commercial Workers International Union Local 1500 said 1,000 of the 17,000 grocery employees the union usually represents are off the job, either in quarantine, isolation or switched away from grocery work.

Union President Robert Newell Jr. said he worries that the combination of harder work, longer hours and the risk of infection will worsen an already difficult environment for grocery staffs. “If it continues, it will definitely create a bigger issue than we already have,” he said.

At LaBonne’s Market, a four-store Connecticut chain, demand for curbside pickup and delivery has jumped by about 50% in the weeks since Christmas, said CEO Bob LaBonne Jr. Cross-trained employees have eased the transition, Mr. LaBonne said, and he hasn’t yet needed to close stores early or shut down on Sundays, as he did for seven weeks in 2020.

As of Wednesday, 8% of Mr. LaBonne’s workforce is in quarantine or isolation, he said, and he is watching local case numbers, including those at his wife’s hospital workplace. “They are expecting the peak to be in two weeks,” he said. “It’s going to get worse before it gets better.”

—Jesse Newman contributed to this article.

Write to Jaewon Kang at jaewon.kang@wsj.com