EDITOR'S NOTE: Labor shortages and supply chain disruptions aren’t just hitting restaurants and retail these days. The Wall Street Journal reports that schools around America are “running low on food from soup to cereal after some manufacturers reduced offerings or limited orders after struggling to meet demand.” To help remedy this issue, the U.S. Department of Agriculture committed up to $1.5 billion “to help fortify the nation’s school-meal program” and says it “hopes” to disperse those funds in January. Major corporations like Campbell and Kraft Heinz are limiting things like soup to schools, although Andy Mercier, CEO of the school food vendor Merchants Foodservice, says, “the volume has been moving over to the retail side,” because that’s where the bigger profits are. 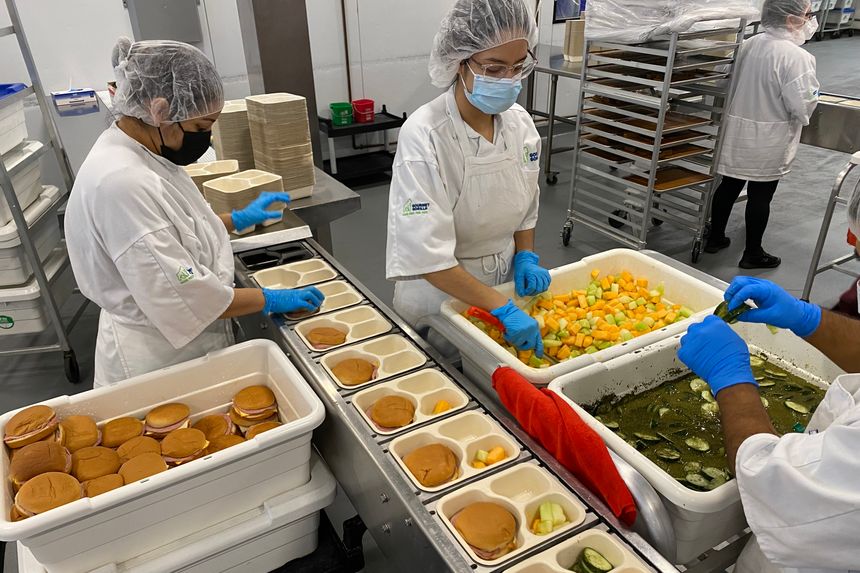 Schools are running low on food from soup to cereal after some manufacturers reduced offerings or limited orders after struggling to meet demand.

Across the U.S., schools are hunting for staples for breakfast and lunch from soup to bacon to pizza, according to distributors, nonprofits and school districts. J.M. Smucker Co. ’s popular Uncrustables sandwiches have been in short supply for some schools. Others are tight on cereal following a monthslong strike at Kellogg Co. ’s cereal plants.

The challenges come as some food manufacturers facing supply disruptions and labor shortages have curtailed shipments to schools and other institutions.

For months, Merchants Foodservice, which serves K-12 schools in Alabama and Mississippi, has received about half of its usual soup inventory, partly as Campbell Soup Co. and Kraft Heinz Co. cut or altered their offerings, said Chief Executive Andy Mercier.

The company hasn’t been able to find additional soup suppliers, he said, adding that it is offering dry soup mixes instead and suggesting different entrees such as lasagna or shepherd’s pie.

The U.S. Department of Agriculture pledged last week to send up to $1.5 billion to states and school districts to help fortify the nation’s school-meal program. The funds, which USDA says it hopes to make available in January, are intended to help schools deal with disruptions brought on by the Covid-19 pandemic. The bulk of the funds are expected to flow to as many as 100,000 schools in all 50 states, and can be used to purchase goods from fresh fruit to dairy to ground meat.

During a visit to a school meal provider in Chicago last week, Agriculture Secretary Tom Vilsack said that boosting schools’ resources should help make them more competitive with private buyers seeking their goods.

Big food makers, like other companies, have struggled to keep up with demand during the pandemic. Early on, many focused on churning out food for grocers as consumers emptied store shelves, and orders from restaurants, schools and other groups dropped. Even then, food companies trimmed their offerings to concentrate on the most sought-after goods.

This year, as demand from schools and other institutions ramped back up, some food companies say, labor, supply and capacity challenges have constrained their ability to supply all their customers.

Kellogg said last month its four U.S. cereal plants weren’t running at full capacity, and that it was taking steps such as importing cereal from overseas plants as far away as Australia. The strike, which lasted for more than two months, ended this week as unionized Kellogg workers ratified a new five-year contract.

Campbell told food service customers in October that the company had temporarily discontinued several sizes of its thermal canned soups, sold to schools and other institutions. The soup maker said supply challenges were affecting its ability to maintain normal service levels, according to a letter from Campbell viewed by The Wall Street Journal. Campbell recommended its line of frozen condensed soups as potential substitutions.

Campbell says it was still able to provide a limited assortment of thermal canned soups to several institutional customers this fall, and that it allocated available products to serve key customers, especially schools and healthcare. Conditions have improved recently, and the company says it told food service customers last week that it had resumed production of several popular soups.

Campbell CEO Mark Clouse said orders from food service customers can be smaller than grocers’, introducing more time and complexity, which are factors the company weighed during the pandemic. Campbell has made investments and added capacity across its soup business in the past year, Mr. Clouse said, helping it boost production.

“We’re not making those same kinds of trade-offs that we were, you know, six months ago,” Mr. Clouse said.

Kraft Heinz told food service customers in October that it had decided to exit from its canned soup business, discontinuing more than a dozen varieties including tomato, chicken noodle and clam chowder, according to a letter from the company viewed by the Journal. The company also offered its frozen soups as an alternative.

Frozen soups haven’t been popular because they are more expensive, distributors said.

Some distributors said food service deliveries have suffered in recent months as manufacturers race to keep up with strong supermarket demand. Often, when suppliers have fewer trucks available, they ship to customers that can generate higher profit margins than schools, said Katie Wilson, executive director at the Urban School Food Alliance that represents more than 15 U.S. school districts.

“The volume has been moving over to the retail side,” Mr. Mercier said.

School districts are also dealing with their own labor issues, with food service directors in some cases pitching in and washing dishes in cafeterias. Others are spending time searching for new vendors or responding to parents and students who express concerns about shortages, Dr. Wilson said.

Lisa Ostrowski, food services director for North Colonie Central Schools in upstate New York, has struggled this year to source goods from hamburger patties to sweet potato fries. She expects her chicken supplier to run out of product by February.

Soup has been tough to source, too, though isn’t a high priority, Ms. Ostrowski said, since packaging such as insulated cups and lids are also in short supply. With many children still eating in their classrooms due to social distancing requirements, offering meals that are easy to transport is key.

She said: “Having children walk down the hallway with soup would not be a good thing.”