EDITOR NOTE: The US has more “paper gold” floating around than actual “metal.” Evidence of that is the record size of gold imports in April. Gold demand is increasing, so many investors bought the paper version. Demand is almost certain to increase as the Fed continues to water down the value of dollars. But the country needs gold to back up all of the paper. So, now the US is sourcing it from around eight countries around the world. If anything, this imbalance between supply and demand tells you about the state of the US economy and its near-term forecast. According to usdebtclock.org, the Fed is currently printing $33,000 for every Real Ounce of gold pulled out of the earth, and Wall Street creates 87 paper ounces for each Real Ounce of the yellow metal. Got non-CUSIP Gold?

The U.S. imported a record amount of gold bullion in April during the global contagion and shutdown of many economies.  The United States imported more gold in April than it did during all of last year.  A lot of the gold imported into the U.S. was due to delivery issues, as many of the large gold refineries were shut down.

While the huge surge in U.S. gold bullion imports during April was mainly due to supply disruptions, it’s an IMPORTANT SIGNAL that all is not well in the Global Financial System.  The panic to get more gold to the U.S. exchanges suggests that there is way too much paper gold leverage in the system.

The highly leveraged gold trading system has worked fine for decades due to an important factor not considered by most in the precious metals community… and that’s rising global oil production.  Let me explain.  World GDP growth is tied to global oil production growth… PERIOD.  While a few other analysts and I have made this point, Jean-Marc Jancovici explained this to a large group of the OECD.

Because the world has been able to add 1-2% of new global oil production on average each year, except for the down-turns, the highly leveraged Financial Ponzi Scheme can continue to grow and expand.  However, when global oil production stops increasing on an annual basis, then global GDP growth is DEAD for good.  And, I mean it.

So, with the global contagion pulling down global oil demand by 25% in April, it forced investors into the safe-haven of gold.  Unfortunately, because there are way too many paper gold contracts trading against few gold bars, investors demanded metal during one of the largest gold supply disruptions caused havoc in the system.

Of course, the large gold refineries came back online, and the supply disruption dissipated.  But, remember… this wasn’t a ONE-OFF EVENT.  This was a signal of BIG TROUBLES ahead when more investors want to acquire physical gold bars.

Which brings me to the large GOLD ANOMALY shown in the chart below: 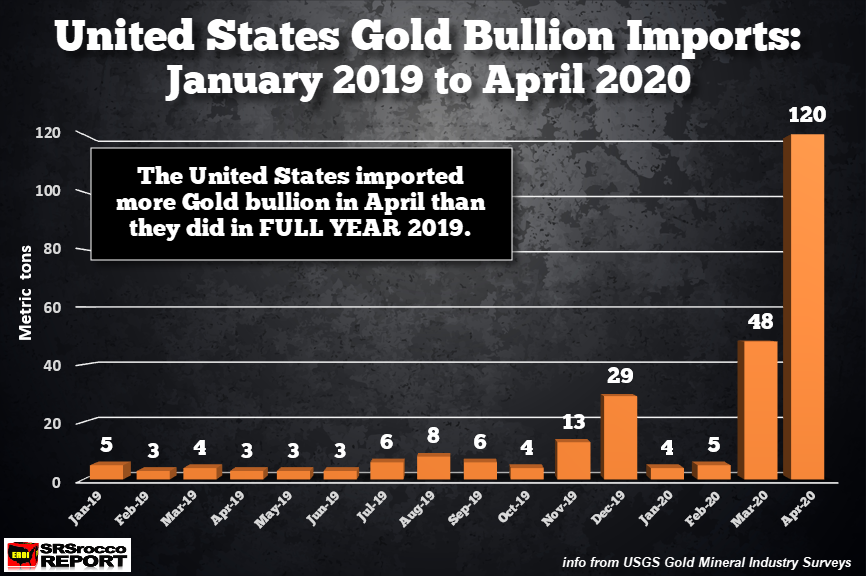 As we can see, for most of 2019, gold bullion imports into the United States were pathetically small.  Americans now utilizing the wonders of the Robinhood trading platform rather buy and trade high-tech bubble stocks and bankrupt companies like Hertz, thinking they are going to make it rich.  This is another sign that ALL IS NOT WELL in the Good ole U.S., of A.

Total U.S. gold bullion imports in 2019 were 87 metric tons versus the 120 metric tons for April 2020 alone.  We can also see that U.S. gold imports starting rising in March at 48 metric tons.  When the May and June figures are released by the USGS, I will provide an update.

While Switzerland was the largest source of U.S. gold bullion imports, we can plainly see that metal was being sourced from all over the world to fill the massive demand.

Now that many U.S. citizens have gone back to work, along with another pending $1+ trillion stimulus plan in September, Americans are now back to doing what they do best, and that is spending lots of money they don’t have on things they don’t need.  What they really need is to own some physical gold and silver insurance.

Regardless, the United States and world are not prepared for the coming ENERGY CLIFF.  I use that term, “Energy Cliff” often and will provide future articles and videos on the details as we see it.  However, in a nutshell, the glorious U.S. Shale Oil Miracle that has added nearly 8 million barrels of production since 2007, and is getting ready to hit a BRICK WALL. 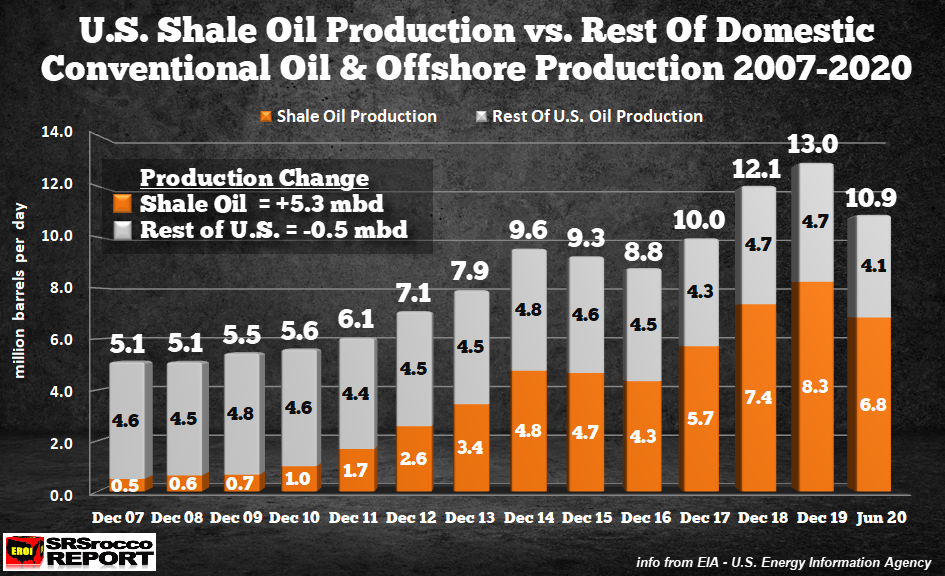 With the U.S. drilling rig count down 75% compared to last year, how does the U.S. Shale Industry plan on keeping production from falling considerably??  The United States’ brief blip of being “Energy Independent” for less than a year will lead to the country importing more oil to satisfy its needs.

As the U.S. Government increases its debt to continue propping up the economy and markets, the one thing it cannot do is print barrels of oil.

And… THERE LIES THE RUB.