The All-Time High: Does Gold Have Only One Resistance Point Left?

EDITOR NOTE: COMEX Gold is currently trading at $1,878 an ounce, nearly 80% up from its August 2015 low of $1,045. Gold has one last area of resistance before soaring to record-breaking territory--it’s 2011 high of $1,923. In a couple of posts we curated yesterday, Citibank predicted that gold would blast through this level within three to five weeks. Based on the current momentum (and accelerating dollar weakness) it appears that gold may reach an all-time-high sooner rather than later.

Tensions of all sorts are on the rise in the US , EU, and globally: Covid, employment, fiscal stimulus China (military and economic), and massive increases in money supply by the central banks, especially the Fed.

The Cup and Handle is a technical formation. A handle is formed on a pullback before the pattern blasts higher.

Of course, there may be no handle. Gold may just blast higher (or collapse) but fundamentals suggest higher, perhaps after some consolidation.

Gold vs Faith in Central Banks 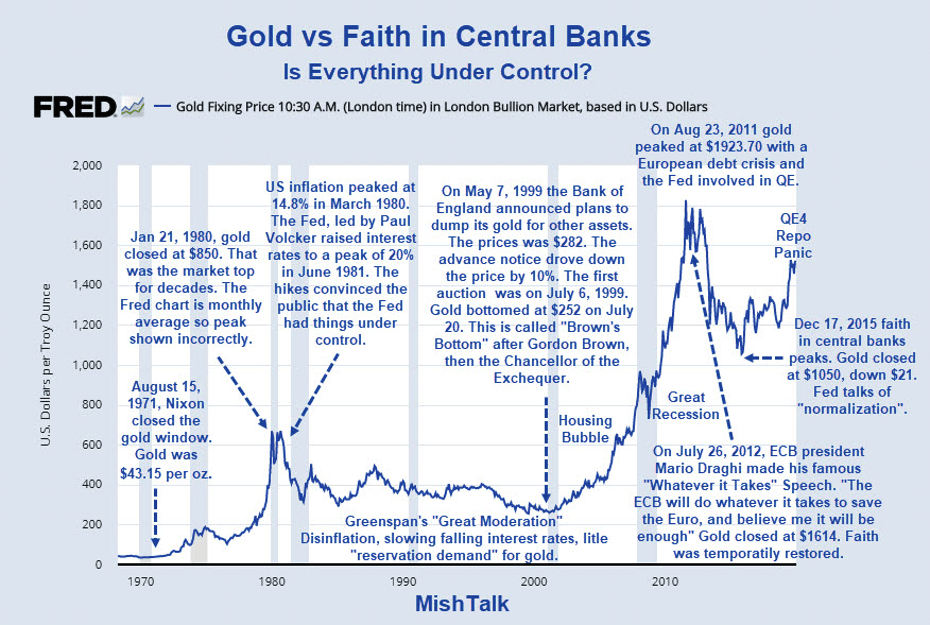 Gold does worst when faith in central banks is the highest. Greenspan's great moderation is the best example. Greenspan was considered the great "Maestro" who could do no wrong.

That theory crashed to earth in the DotCom bust. We have now had 3 major economic bubbles in 20 years.

If you currently have any faith that Central Banks have things under control, then please explain where you got that notion.

It should be obvious that the Fed is boosting financial assets but that is not going to create jobs or cure covid.

In short, the Fed is blowing bubbles, many believe on purpose, and gold has responded to the stress.

I do not see a reversal in Fed policy. Do you?