The Bad News On Inflation Just Keeps On Coming

EDITOR'S NOTE: Here’s something that might seem obvious to most: the negative effects of inflation exceed the price increases that define it. Inflation has an effect on wage erosion and higher wage demands. It affects price expectations which, in turn, affects business forecasts and strategies in production to pricing. It takes its toll on consumer confidence in almost all sectors of the economy. Its political ramifications are destructive. Ultimately, its severity of emergence can often cause an uncertain and heavy-handed response from the Fed which almost always deals a punishing blow to economic growth. There’s plenty of bad news stemming from the emergence of runaway inflation. And unless you’re positioned to absorb its blow, as with most who have hedged early on, then it may be a little unsettling to accept the possibility that the current inflationary crisis may still be in its early stages.

Even as supply-chain snarls ease, wage growth and price expectations are ticking up.

The bad news on inflation just keeps coming. At more than 9% year on year across the rich world, it has not been this high since the 1980s—and there have never been so many “inflation surprises”, where the data have come in higher than economists’ forecasts (see chart). This, in turn, is taking a heavy toll on the economy and financial markets. Central banks are raising interest rates and ending bond-buying schemes, crushing equities. Consumer confidence in many places is now even lower than it was in the early days of the covid-19 pandemic. “Real-time” economic indicators of everything from housing activity to manufacturing output suggest that economic growth is slowing sharply. 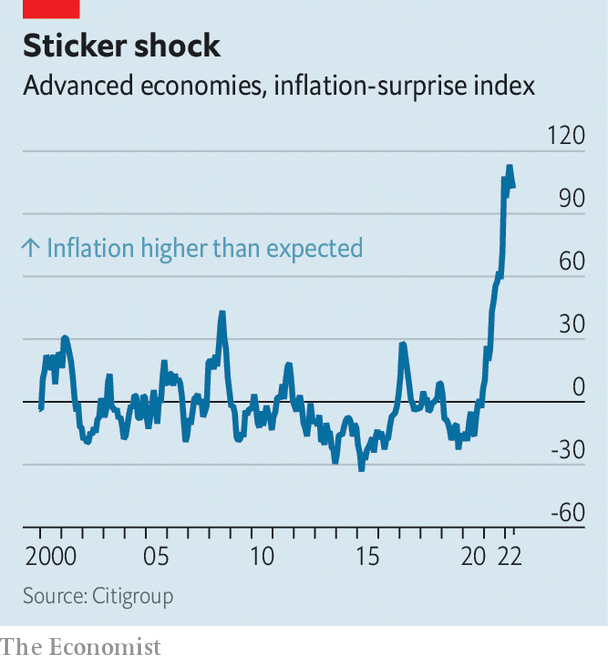 Originally published on The Economist.