The Best-Performing Asset Class of 2022: Gold EDITOR'S NOTE: A traditional safe haven, gold has also been called the “fear trade.” It’s an inverse way of describing its function with regard to market sentiment. With inflation running seemingly beyond the expectations and control of the Federal Reserve, and with Russia’s invasion of Ukraine underway, just about every fear factor that can drive gold’s trajectory skyward is present. Gold is expected to be the best-performing asset of 2022. Yet, the potential flight up will not commence without its share of turbulence. As Krishna Kant, writing for Business Standard, states below, “many analysts…expect a correction in gold prices in the short-run led by profit-booking by traders.” She’s right in saying that the “medium to long-term trend remains bullish.” But if you’re sensitive to the market’s erratic rhythms, then it may not be a pleasant flight. Despite being a hedge against volatility, gold itself is likely to experience volatility, shaking out weaker hands to the potential benefit of those with a clearer long-term vision.

Gold has emerged as the best-performing asset class in 2022, after underperforming most risk assets last year. The yellow metal was trading at around $1,900 per ounce in the international market on Tuesday, up from $1,796 at the end of January. The precious metal made an intra-day high of $1,918 on Tuesday. Currently, gold is trading at its highest level since June 2021.

The yellow metal is up nearly 5 per cent during February and nearly 4 per cent since the beginning of the calendar year as stocks and currencies struggle amidst high inflation and geopolitical tensions between Russia and Ukraine. In comparison, the Dow Jones is down 6.2 per cent year-to-date (YTD) in 2022, while the Sensex is down 2 per cent YTD in dollar terms and 1.6 per cent in local currency. Other major stock indices, such as UK's FTSE100, Germany's DAX, Japan's Nikkei 225, and China’s Shanghai Composite, have also underperformed the yellow metal this year so far.

Historically, gold acts as a hedge against inflation and uncertainty caused by economic shocks and geopolitical tensions. Given this, gold usually does well when other asset classes struggle. For example, the yellow metal was the top performing asset in the calendar year 2020, when the breakout of the Covid-19 pandemic led to a sharp decline in stocks and commodity prices. Gold had appreciated by 25.1 per cent in 2020, as against a 13.1 per cent rise in the Sensex (in dollar terms) and a 7.2 per cent rise in the Dow Jones Industrial Average.

Gold prices, however, declined by 3.6 per cent in 2021, as an improvement in economic conditions globally and infusion of liquidity by central banks led to a rally in stock prices. Stocks are once again on the backfoot in 2022. In fact, gold prices are now up 11 per cent from its 2021 low hit in March last year.

Consumer price inflation in the United States, the world’s biggest economy, rose to a four-decade high of 7.5 per cent in January. This coupled with geopolitical tensions in Europe has led to a safe haven demand from investors. 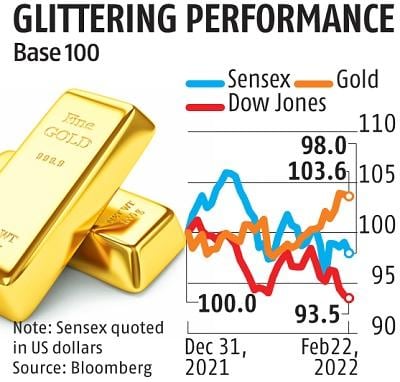 "Gold advanced to the highest level in more than eight months as concerns over heightened geopolitical tensions stoked demand for safe haven assets. Bullion has just capped three straight weeks of gains, pushed higher by the possibility of a conflict in Europe," Megh Mody, research analyst (commodity and currency) at Prabhudas Lilladher, wrote.

According to him, geopolitical concerns have outweighed bearish sentiment from a potential rate rise, which could dampen demand for the non-interest-bearing precious metals such as gold.

Remarks last week by Governor Lael Brainard and New York Fed President John Williams, as well as Chicago Fed chief Charles Evans, showed that officials were eager to get tightening underway, without seeking a super-sized interest-rate hike or a move before the next scheduled meeting.

Higher interest rates are bad for gold prices as investment in the precious metal doesn't give interest or dividend like bonds and stocks. The US Federal Reserve plans to start raising interest rates from April this year in a bid to fight the surge in inflation.

Many analysts, however, expect a correction in gold prices in the short-run led by profit-booking by traders. The medium to long-term trend, however, remains bullish for the precious metal given rising inflation and a slowdown in economic growth in major economies.

“While rate hikes by central banks can create headwinds for gold, elevated inflation and market pullbacks will likely sustain demand for gold as a hedge while jewellery and central bank gold demand may provide additional longer-term support,” wrote analysts at the World Gold Council.

Technically, the yellow metal faces stiff resistance at its record high of $2,027 per ounce made in 2021. Only a strong closing above this level could take it to new highs.