The Biden Administration Changes Definition of Recession Prior To GDP Reporting EDITOR'S NOTE: Institutions that refuse to be self-critical, particularly when the outlook is bad or when it is somehow at fault, telegraph two things: either it does not have the capacity to see a problem that it ought to improve, or it is trying to gaslight the public into believing it could never be at fault. The latter is a tactic that autocratic governments typically employ. We’re mentioning this because the White House just changed the definition of a recession on its official website. The measure of recession, two consecutive quarters of negative GDP growth, is no longer “official,” and is now in doubt. While some economists would argue that a recession may be a natural part of the economic cycle, the White House sees it as political kryptonite, and so chooses to de-nature the cycle by changing the perception surrounding it. While the Dems accuse the previous administration of poisoning America’s democracy by injecting deceptions into the system, the current administration has proven just as skillful in assassinating truths.

Economists, investors and brokers already say that America is heading for, or may already be in, a recession.

Despite early signs of recovery and optimistic forecasts in 2021, and an apparent determination to focus on the promising aspects of the country's economic health, the Biden administration is now seeing warning flashes of further and prolonged pain.

However, some have suggested that rather than a more critical outlook, the White House is instead "shifting the goalposts" in its economic analysis.
A Reddit post, published on 24 July, 2022, claims that The White House altered the definition of a recession on its website "conveniently after GDP numbers were released." 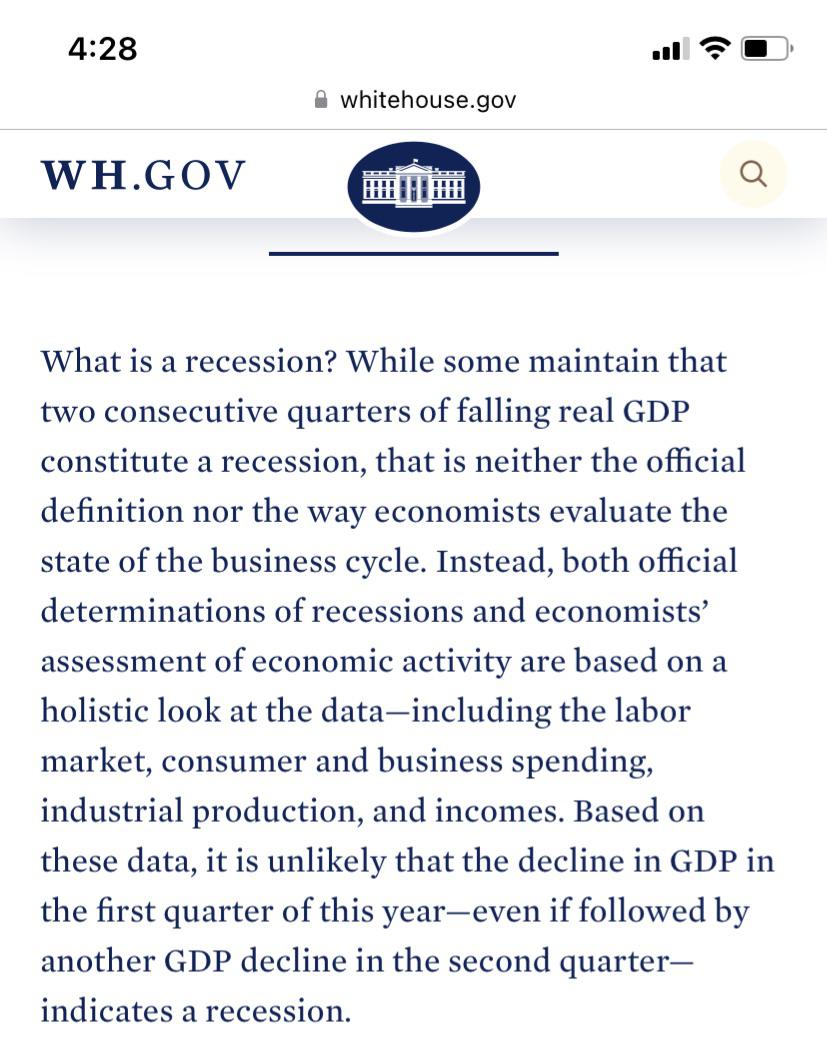 Source: News Week
This was also picked up by Fox News White House correspondent Jacqui Heinrich who posted it on her Twitter, eliciting thousands of engagements.

Before addressing the specific accusations fired at the White House, it's worth quickly noting the most widely accepted definition of a recession: a decline across two consecutive quarters in gross domestic product (GDP) and economic activity. What metrics that activity is defined by, and what scale of decline is required is less clear, however.

Before dealing with some of the more substantive questions that the claims on social media suggest, there are a couple of finer points to address.

First, there's a minor inaccuracy in the Reddit post. It claims the White House published this article after GDP numbers were released. GDP numbers will actually be released this Thursday, July 28, 2022.

Second, both the Reddit and Twitter posts have cropped out the header of the purported White House "definition."

The text, published on social media, is from a July 21, 2022 blog post, titled "How Do Economists Determine Whether the Economy Is in a Recession?"

By only including the first two paragraphs of this blog post, alongside the White House logo and website URL, the captures on social media may imply the content came from a more authoritative or neutral source.

This is not the case; it is an editorial piece that is labeled as such. The subheadings "Written Materials" and "Blog" include hyperlinks, which when selected present a chronological list of press releases and other White House analysis, which do not purpot to be a dictionary of accepted government terms and metrics.

Furthermore, the White House website doesn't have a dictionary or catalog of all political terminology and jargon it uses (that is the case for other governments, such as those of the UK and Canada, too).

It serves as the online landing page for the incumbent presidential administration and 1600 Pennsylvania Avenue.

As the website of the president, it is not a faultless, non-partisan archive of information either. The Trump presidency demonstrated how it could be used to make debatable claims or perpetuate mistruths, such as that the border wall between Mexico and the U.S. had been completed.

There are politically expedient reasons for a government to withhold recession calls, just as its rivals might herald one prematurely.

As the pressures caused by supply chain disruptions post-Covid and the conflict in Ukraine have demonstrated, there are global influences beyond the reach of domestic governments that can provide leverage to excuse withering economic performance as well.

Similarly, fears of a recession can be kicked around to denigrate a political rival.

Take for example Donald Trump's (who oversaw the U.S.'s deepest recession since the Great Depression) shifting view on the subject, from predicting a "massive recession" in pre-election 2016, to denying the possibility in 2019, denying it again in April 2020, to warning in July 2022 that the U.S. economy could reach levels of Great Depression.

For its part, the Biden administration has publicly attempted to highlight its economic achievements and downplay the prospects of a recession. On the same day the blog post shared on social media was published, wh.gov also released a transcript of an interview with treasury secretary Janet Yellen, in which she claimed that there was "a broad range of data" to show "this is not an economy that's in recession."
Much of what Yellen says echoes the themes of the White House blog post.

"There is an organization called the National Bureau of Economic Research that looks at a broad range of data in deciding whether or not there is a recession," she said.

"And most of the data that they look at right now continues to be strong. I would be amazed if they would declare this period to be a recession, even if it happens to have two quarters of negative growth.

"We have a very strong labor market. When you are creating almost 400,000 jobs a month, that is not a recession."

This brings us back to the main question of what defines a recession (typically understood as a contraction of gross domestic product across two consecutive quarters). The White House blog post merely posits an argument that a recession should be classified using more detailed analysis and a wider range of indicators.

The blog states how the government uses The National Bureau of Economic Research (NBER) Business Cycle Dating Committee as its "official recession scorekeeper." This committee defines it a recession as "a significant decline in economic activity that is spread across the economy and that lasts more than a few months."

The White House statement goes on to say the variables the NBER considers include "real personal income minus government transfers, employment, various forms of real consumer spending, and industrial production."

"Notably, there are no fixed rules or thresholds that trigger a determination of decline, although the committee does note that in recent decades, they have given more weight to real personal income less transfers and payroll employment." 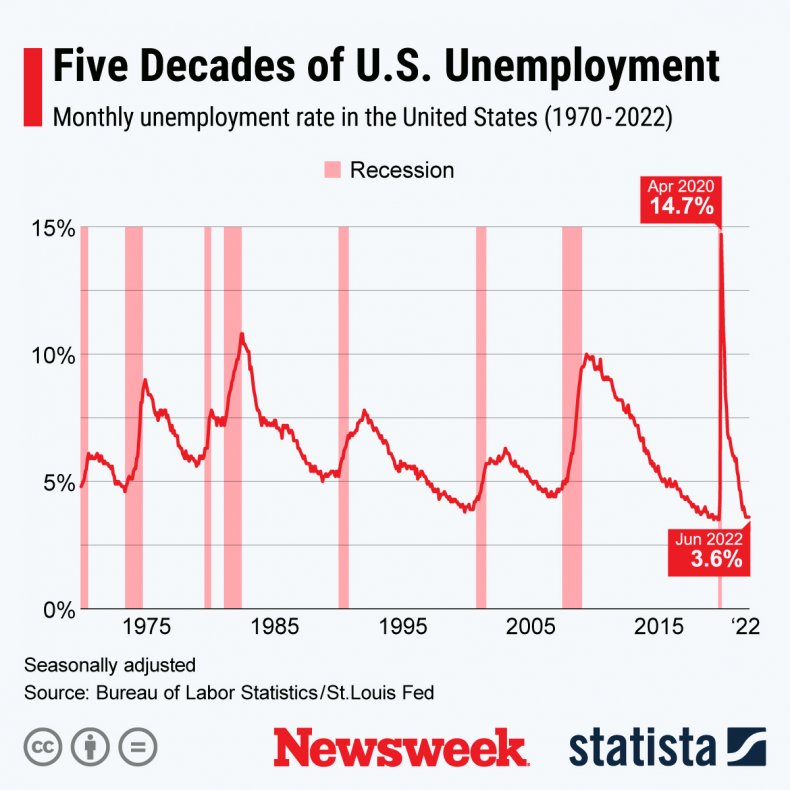 This chart shows the annual unemployment figures in the United States since 1970. The rate recorded in June 2022 is on par with some of the lowest unemployment numbers in the past 50 years.STATISTA/BUREAU OF LABOUR STATISTICS/ST. LOUIS FED (Source: Newsweek)

While the White House blog argues that growth in consumer spending, fixed investment and payroll employment may well strengthen its case that the U.S. may not yet face a recession, it also concedes that "Recession probabilities are never zero," something the posts on social media neglect to mention.

Independent organizations such International Monetary Fund, the UK's Office for National Statistics and the World Economic Forum have previously commented in a similar vein, arguing the definitions are too narrow and that wider measures of economic activity should be considered.

To explore this point further, Newsweek spoke to a number of economists for their view.

David Blanchflower, professor of economics at Dartmouth and a former member of the Bank of England's Monetary Policy Committee, told Newsweek that while the rule of thumb was recession was defined by two successive quarters of negative GDP growth, research due to be published suggests that previous positive growth, followed by successive negative growth, may predict a recession much earlier than other models.

"The issue also is that the last two recessions, including the Great Recession (2007-2009), had a negative quarter followed by a positive one followed by several more negatives," he said.

"I actually do think this time around we are in recession, as the first two quarters of 2022 will be negative. The labor market has changed and lags as it has in Europe where the two negative quarter rule works eventually, as there are revisions at downturns."

Laurence Ball, a professor of economics at Johns Hopkins University and a consultant for the International Monetary Fund, argued that while its a complex topic and that there were shortcomings to the NBER's method, he didn't think that "any reasonable definition of a recession would indicate that a recession should be declared for the U.S. today."

"That said, there is a risk of a recession going forward, depending on how much the Fed interest rate increases slow the economy," he added.

Other experts have chimed in, ahead of Thursday's GDP figures, such as Larry Summers, former economic adviser to ex-President Barack Obama, who told Politico's Playbook Deep Dive podcast, that a high inflation rate and low unemployment rate was nearly certain to trigger a recession.

"We have had soft landings because we tightened at moments when the inflation rate was low and the unemployment rate was high," said Summers.

"We have not had soft landings for moments when the unemployment was below 4 [percent] and the inflation was well above 4 [percent] ... Never happened in the United States going back 60, 70 years."

Recent polling also found that in July 2022, 58 percent of Americans thought the country was in recession, up from 53 percent in June.

There is no question that inflation rises, price increases, housing downturn and plunging financial markets could champion an argument that a recession is coming.

Moreover, statements made by the Biden administration, including that high gas prices are the sole result of "Putin price hikes," or its now badly-aged predictions that inflation would quickly subside, indicate it may not have either the clearest or most reliable view of the economy.

Nonetheless, regardless of one's views on the current situation, it is a far cry to say the White House has reinvented the definition of recession, when there is no consensus among experts and authorities about what exactly a recession constitutes, and whether the U.S. is in one already.

Newsweek has contacted The White House and Fox News for comment.