The Biden Administration Just Set Another Record: Worst Inflation Since 1981 EDITOR'S NOTE: It’s a sad thing for Biden supporters and detractors alike to realize that his most unquestionable achievement to date is to have boosted the worst inflation rate since 1981. It’s also dreary to think that soon he may top this record, as inflation is far from peaking (contrary to what many mainstream pundits claim). Biden’s initial response—to release fuel reserves and to allow certain banned forms of gasoline to go to market—is nothing more than an exercise in virtue signaling. How so? It makes him look good (to the foolish majority who refuse to dig deeper into the situation) and yet it’s hardly going to make a dent in the overall rise in fuel costs; a price trend that will continue to bring the costs of other non-energy goods and services through the roof. So, what’s the president going to do now that the average household’s annual expenses just got a $5,000 bump? He has quite a few more solutions. But unlike his “fuel” response, this won’t just help a bit, instead, it will likely deepen the crisis. Don’t believe it? Read on. 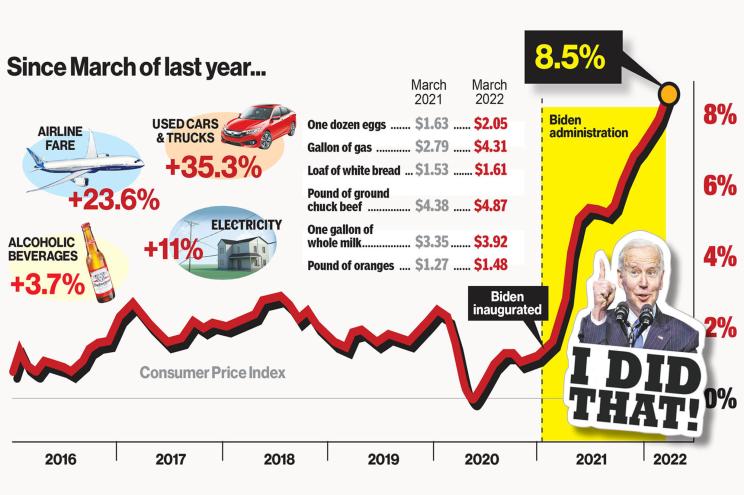 President Joe Biden just set another record: The worst inflation since 1981, as consumer prices climbed a staggering 8.5% over the 12 months ending in March.

The White House response? A waiver to allow usually banned sales of high-ethanol gasoline over the summer, which impacts only the gas sold at 2,300 gas stations nationwide, out of around 150,000 total.

The inflation picture gets even uglier when you drill down (though, of course, Team Biden opposes new drilling). Fuel oil is up an eye-popping 70%; gasoline, 48%. Not a single category of food saw sub-7% inflation.

The overall number just for March was 1.2%, the sharpest monthly jump since September 2005. That translates to a loss of 2.7% for monthly wages.

Hardest hit are those Democrats claim to care about most: Some 35% of non-white voters report major financial strain along with almost 50% of voters with incomes below $60,000.

But the president refuses to adjust course. His budget calls for more taxes, more borrowing, more spending. He’s made no move to end his war on domestic energy. And he definitely won’t admit that his disastrous American Rescue Plan was, as a Fed study has shown, the spark that touched off this conflagration by dumping almost $2 trillion into an already overheating economy.

Nope, all Americans get from Joe & Co. is trivial gestures and lame blame-shifting.

All of which basically guarantees that inflation, along with all the other disasters wrought by Democratic control of Washington, will only keep getting worse.