The Energy Transition Is In Full Swing

EDITOR'S NOTE: Right now, the world is still run on oil. However, as the world quickly transitions to solar power, electric cars, and other alternative energy-based technology, metals are becoming the new oil, according to OilPrice.com. These new technologies that use clean energy utilize a lot more precious metals than traditional oil-based tech. That means that prices for silver, copper, nickel, cobalt, and lithium are and will continue to rise in the coming months and years. Companies that mine, process, and produce components around precious metals will also see a jump in value. Author Alex Kimani then goes through each type of clean energy sector and discusses which metals each uses and what to look out for as they grow.

The energy transition is in full swing, with electric vehicles supplanting gas guzzlers and solar panels and wind turbines replacing coal and oil as the world’s leading energy sources. Scientists have warned that keeping temperature rises to 1.5C requires global emissions to be cut by 45% by 2030 and to zero overall by mid-century. In the ongoing COP26 climate summit, nations have promised to end deforestation, curb CO2 and methane emissions and also stop public investment in coal power.

The energy transition is driving the next commodity supercycle, with immense prospects for technology manufacturers, energy traders, and investors. Indeed, new energy research provider BloombergNEF estimates that the global transition will require ~$173 trillion in energy supply and infrastructure investment over the next three decades, with renewable energy expected to provide 85% of our energy needs by 2050.

But nowhere is the outlook brighter than the metals industry.

Clean energy technologies require more metals than their fossil fuel-based counterparts. According to a recent Eurasia Review analysis,  prices for copper, nickel, cobalt, and lithium could reach historical peaks for an unprecedented, sustained period in a net-zero emissions scenario, with the total value of production rising more than four-fold for the period 2021-2040, and even rivaling the total value of crude oil production.

There’s a big negative for the fossil fuel sector--BNEF has forecast that electric and fuel cell vehicles will displace 21 million barrels per day in oil demand by 2050. 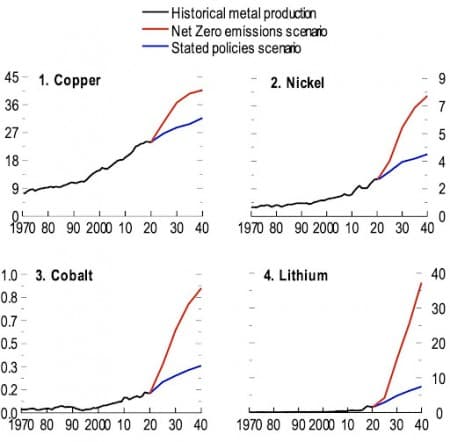 In the net-zero emissions scenario, the metals demand boom could lead to a more than fourfold increase in the value of metals production–totaling $13 trillion accumulated over the next two decades for the four metals alone. This could rival the estimated value of oil production in a net-zero emissions scenario over that same period, making the four metals macro-relevant for inflation, trade, and output, and providing significant windfalls to commodity producers.

Here are the long-term outlooks for key commodities and clean energy sectors as per BNEF.

BNEF estimates that it takes 10,252 tons of aluminum, 3,380 tons of polysilicon and 18.5 tons of silver to manufacture solar panels with 1GW capacity. With global installed solar capacity expected to double by 2025 and quadruple to 3,000 GW by 2030, the solar industry is expected to become a significant consumer of these commodities over the next decade.

An unexpected jump in demand for solar panels from late 2020 due to renewed carbon commitments by the Biden administration and China have led to a surge in the price of polysilicon and disrupted the decade-long falling costs of solar installations. According to a new report by the Solar Energy Industries Association and Wood Mackenzie, supply chain bottlenecks and rising raw materials costs have hit the U.S. solar industry, as solar prices rose Q/Q and Y/Y during Q2 across every U.S. market segment. This marks the first time that residential, commercial, and utility solar costs have increased together since Wood Mackenzie began tracking prices in 2014. The most significant cost pressures came from rising prices for raw materials, including steel and aluminum.

Several new polysilicon plants, mostly in China, are currently under development and are expected to bridge part of the supply gap. However, the current shortfall is a clear signal that a lot more needs to be done as the decarbonization and electrification drive accelerates.

Luckily, BNEF analyst Yali Jiang says fundamental shortages of polysilicon are unlikely to become a long-term problem since prices always drive more capacity. BNEF says it’s more concerned about other auxiliary materials in solar panel production and installation that use silver, aluminum, and steel, etc., since these metals are subject to the wider commodity world.

It takes about 154,352 tons of steel, 2,866 tons of copper, and 387 tons of aluminum to construct wind turbines and infrastructure with the power capacity of a gigawatt as per BNEF estimates. The Global Wind Energy Outlook (GWEO) has forecast installed wind capacity to hit 2,110GW by 2030, representing a 185% growth over the timeframe.

Just like the solar sector, rising cost pressures are beginning to negatively impact the rollout of wind projects, which coupled with the expiry of key subsidies in China, is expected to lead to record capacity additions dropping, according to the Global Wind Energy Council.

In fact, Denmark’s Vestas Wind Systems A/S (OTCPK:VWDRY), one of the world’s biggest turbine producers with 31% share of the global market, recently cut its outlook for the rest of 2021, citing rising raw materials prices and disruptions to supply chains. In August, Vestas lowered its full-year revenue guidance to €15.5B-€16.5B from its previous forecast of €16B-€17B and expected EBIT margin to 5%-7% from its previous outlook of 6%-8%.

A big part of the rising costs can be pinned on steel, with steel prices having jumped in the U.S. this year and also advanced in China and Europe.

But here again, the long-term outlook is bullish, with BNEF saying capacity additions will recover and reach an annual clip of 129 gigawatts by 2030.

“Commodities inflation is here. Beyond the next 12 months, it is now about seeing both that the projects can and will be built, and also what’s the price?”Henrik Andersen, Vestas Wind’s chief executive officer, has posed.

The Li-ion battery sector outlook is probably the most bullish of all.

That’s the case because of the rapid adoption of EVs as well as utilities having doubled down on utility-scale battery storage units (one megawatt (MW) or greater power capacity) as battery costs continue falling across the board. A recent Pew Research Center survey found that 7% of U.S. adults currently have an electric or hybrid vehicle, and 39% say they are ‘very likely’ or ‘somewhat likely’ to seriously consider buying an EV when they next shop for a vehicle.

Lithium-ion battery pack prices fell 89% from 2010 to 2020, with the volume-weighted average hitting $137/kWh--$100/KWh is considered the Holy Grail where EVs will achieve cost parity with ICEs.

In 2019, NextEra Energy (NYSE:NEE) announced plans to build a 409-MW energy storage project in Florida that will be powered by utility-scale solar.

Xcel Energy (NASDAQ:XEL) has plans to replace its Comanche coal units with a $2.5-billion investment in renewables and battery storage, including 707 MW of solar PV, 1,131 megawatts (MW) of wind and 275 MW of battery storage in the State of Colorado.

Duke Energy (NYSE:DUK) announced plans to build an energy storage project at the Anderson Civic Center, Carolina, including investments to the tune of $500 million in battery storage projects for electricity generation capacity of 300 MW.

According to the EIA, operating utility-scale battery storage power capacity in the United States more than quadrupled from 2014 (214 MW) through March 2019 (899 MW). The organization projects that utility-scale battery storage power capacity could exceed 2,500 MW by 2023, or a 180% increase, assuming currently planned additions are completed with no current operating capacity being retired.

UBS estimates that the United States energy storage market could grow to as much as $426 billion over the next decade.

A host of energy experts, including UBS, BloombergNEF, S&P Market Intelligence, and Wood Mackenzie, are extremely bullish about the prospects of the battery storage industry-- both over the near-and long-term--as the clean energy drive gains huge momentum.

BNEF estimates that it takes 1,731 tons of copper, 1,202 tons of aluminum, and 729 tons of lithium to manufacture 1GWh Li-ion batteries.

In its June report, BNEF says the supply of lithium is likely to remain tight through 2022 as demand from the battery sector builds. But unlike solar and wind where key deficits are expected to be more ephemeral in nature, BNEF says that lithium hydroxide, the chemical favored for premium Li-ion cells, could see shortages by 2027.

To make the situation even more dicey, the limited availability of other battery materials is already threatening the battery sector’s ability to keep pace with the EV boom.  Lithium chemicals and copper foil are a particular concern, while all key battery metals have seen price spikes since mid-2020.

Kwasi Ampofo, head of metals and mining at BNEF, says battery ingredients nickel and manganese could see some of the most severe shortages later this decade thanks to a lack of capacity to process those metals into specialist chemicals.

Lei Zhang, chief executive officer of Envision Group, says the supply chain of batteries, especially on the raw material side, needs more investment, including in new lithium and nickel mines.

Price swings are a major concern in the battery sector because higher costs could have a negative effect on EV adoption.

The growth of the overall EV charging stations market is mainly hinged on factors such as rising demand for EV fast-charging infrastructure, government initiatives to drive the adoption of EVs and associated infrastructure, increasing deployment of EVs by shared mobility operators, and increasing prevalence of range anxiety.

A single fast, public electric vehicle charger typically needs 25 kilograms of copper, while a smaller charger to use at home needs around 2 kilograms of copper, according to BloombergNEF estimates. That might not seem like much, but it could be significant when you consider that global charge points are expected to increase from 1.3 million units in 2020 to 30.8 million units by 2027, good for a CAGR of nearly 50%.

U.S. President Biden has pledged to roll out 500,000 new charging stations in the country by 2030. China--home to the lion’s share of the world’s public connectors--is adding chargers at a breakneck pace while the likes of Tesla Inc.(NASDAQTSLA) and BP Plc (NYSE:BP) have made big commitments.

Installations of public chargers along highways, at fleet depots, and in grocery store parking lots jumped more than a third last year to bring the global total to 1.36 million units. BNEF sees charger installations increasing rapidly to reach 309 million connectors by 2040, when the sector’s annual investment will top $590 billion.

EV charging infrastructure is highly exposed to raw material shortages, and the rising cost of materials could impact rollouts.

By Alex Kimani for Oilprice.com