The Era of Global Fiat: 50 Years Since Nixon's Historic Decision

EDITOR NOTE: The bill for Richard Nixon’s decision to end the gold standard is finally coming due 50 years later. The move away from gold and to an era of global fiat halted decades of wage growth for working-class Americans and supercharged the top 1%’s ability to expand their wealth out of thin air. The move worked at the time because global debt was so low. However, the move also lifted the “policy constraints of gold and sound money,” which directly led to countries accumulating debt and running deficits at levels Nixon could never dream of. Now, central banks are doing their best to use QE to keep this house of cards standing but, how long can this last? “We’ve milked the flexibility of fiat money for 50 years to solve our real-time problems and kick many cans down the road," Deutsche Bank credit strategist Jim Reid notes. "Can we continue to do this?" The answer is likely no, not for much longer.

Almost a decade ago, around the 40th anniversary of Nixon ending the gold standard, we observed that it wasn't just the dollar's convertability into gold that died - so did the prosperity of the US middle class, because while income growth for the bottom 90% had soared ever since WWII, it suddenly flatlined around Nixon's historic decision in 1971; at the same time the advent of the "fiat standard" ushered in an era of unprecedented wealth for the top 1% whose fortunes have exploded ever since. As discussed below, Nixon's decision would lead to monumental consequences for not just the US but the entire world. 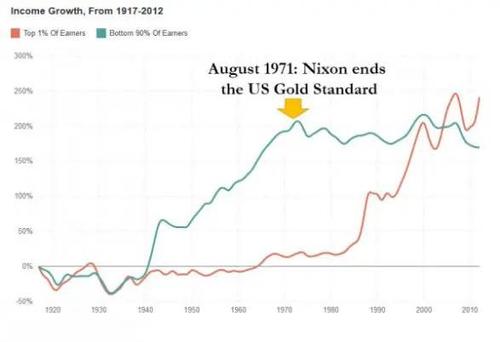 Fast forwarding a decade to today, Deutsche Bank's credit strategist Jim Reid reminds us that this Sunday marks exactly fifty years since Nixon suspended the convertibility of the dollar into Gold.

This, Reid goes on, began the era of global fiat money noting that "one of the reasons it has survived so long is that at the start of this period global debt was very low" as his Chart of the Day shows.

Once the "shackles" and policy constraints of gold and sound money were lifted, countries were able to run structural deficits and increase debt to an unprecedented level. Initially, this didn’t have any major systemic implications for many as debt was still historically low. However, the Global Financial Crisis was, in the DB strategist's view, the limit to how much debt a free market could cope with: "A once-in-a-lifetime global crisis emerged, followed by a Sovereign crisis."

However, just as things looked bleak for our debt-fuelled fiat world, along came QE and central banks with the biggest can-kicking event in history. Since then, G10 central bank balance sheets have increased from just below $5 trillion in 2007 to just below $30 trillion today. 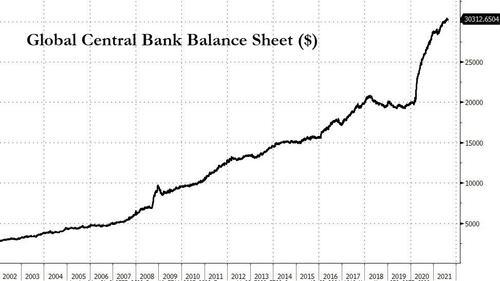 Reid correctly summarizes that "we’ve milked the flexibility of fiat money for 50 years to solve our real time problems and kick many cans down the road" and rhetorically concludes by asking "can we continue to do this?"

Finally, for those who may have missed it, here it is again: