EDITOR'S NOTE: Now that the risk of runaway inflation is as clear to the Fed as it has been to shoppers for quite some time, it won’t take much for the Fed to push the economy into a recession. As Michael Kramer writes, an “over-tightening” is to be expected, as the Fed’s historical pattern of reacting too late and responding with too heavy a dose (of monetary solutions) is virtually predictable. Kramer lays out the current landscape, points to correlations with past inflationary flare-ups, and concludes with a well-reasoned verdict that, to no one’s surprise, this time really isn’t that different after all. Our verdict: if you haven’t already hedged your cash and equities position with a safe haven like gold or silver, now’s the right time to consider it, as the market hasn’t yet priced in the storm to come.

This article was written exclusively for Investing.com

Inflation rates for December showed no signs of slowing, with the Consumer Price Index (CPI) rising by 7% year over year, while the Producer Price Index (PPI) jumped by 9.7%. The big jump in both the CPI and PPI come as a surprise especially following a weaker than expected December ISM manufacturing report and prices paid index and a big slump in oil and gasoline prices in November.

Historically trends favored some alleviation in inflationary pressure based on those factors, but now with oil back on the rise and other commodities like copper once again beginning to move up as the dollar weakens some. The significant risk to this economy is that inflation continues to push higher, ultimately pushing the US economy into a recession.

While high inflation rates do not always lead to a recession here in the US, since the late 1940s nearly every significant spike in the consumer price index on a year-over-year basis has been associated with a significant US recession. While this time may be different, the odds seem to suggest it won’t be. 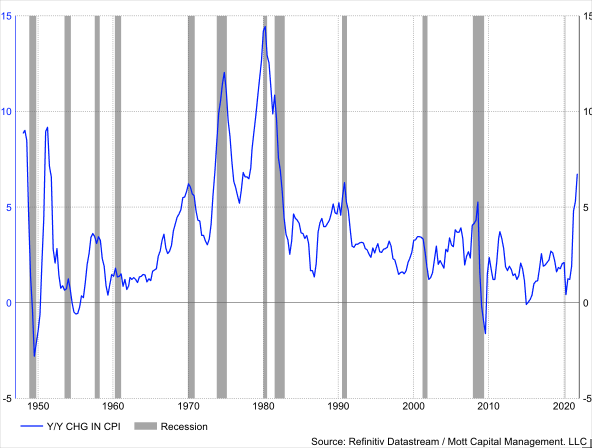 While the Fed is now working hard to get inflation rates down, it may be too little too late. The Fed is trying to tighten monetary policy, which kills the demand side of the economy, when the US economy is already expected to see its rate of growth slow. A recent Reuters poll shows that GDP growth in 2022 is expected to slow to 3.9% from an estimated growth rate of 5.6% and then slow further in 2023 to 2.5%. It would not take much from the Fed to overtighten and cause a contraction. 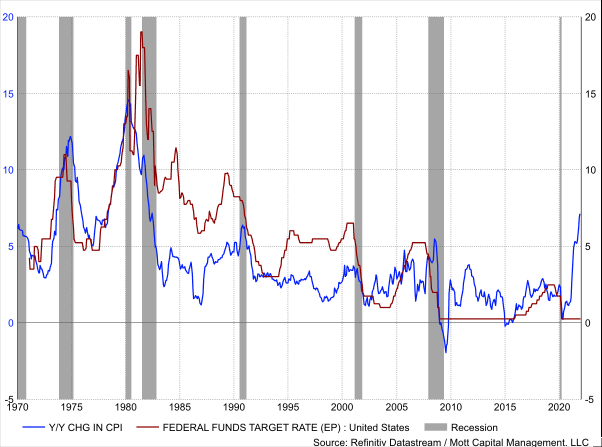 That is precisely what has happened before. Historically, higher inflation has led the Fed to aggressively increase the Federal Funds Rate in prior cycles starting in the 1970s. In each case, the combination of the higher Fed Fund Rate and a high inflation rate have led the US economy to fall into recession. This time seems it will turn out the same, as the Fed is now on a quest to raise rates in 2022 and the markets are beginning to price in as many as four rate hikes. 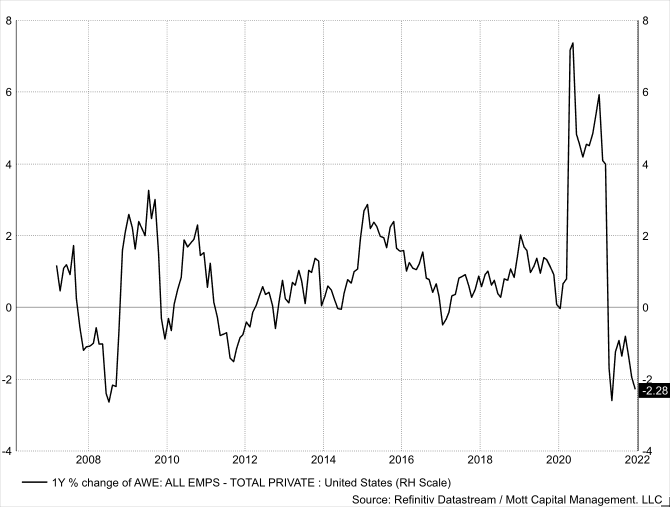 Despite all this high inflation and the threat from the Fed to raise rates and taper the balance sheet, yields are not rising, especially on the long end of the curve. The 10-year is still trading around 1.75%. On top of that, the 2-year note still only trades for 90 basis points. This leads to flattening across the curve and suggests that the bond market is still having a tough time believing the Fed will be as aggressive at raising rates as the Fed implies.

It could only mean that the bond market doesn’t think the Fed will get to raise rates as much as it says it will because the bond market sees a significant economic slowdown coming. While the yield curve isn’t flashing recession warnings yet, the spread between the 30-year and the 5-year is now trading at just 55 basis points and has flattened dramatically since May. Currently, an inversion doesn’t seem to be out of the question.

This would weigh on equity markets, with stocks carrying high valuations that do not fully price in the odds of an aggressive Fed and are counting on 8% earnings growth over the next twelve months. But, if wages aren’t keeping up with rising inflation, that could put pressure on corporate earnings, slowing growth and causing multiple contractions, leading to further decline in equity values.

It seems that history is about to repeat itself, again.