The Fed Should Stop Saying That Low Rates Benefit The Poor

EDITOR NOTE: There’s been a lot of Fed-talk on racial diversity and income inequality. Somehow, those two matters found their way into the Fed’s agenda, if not just their virtue-signaling PR mechanisms. The Fed’s solution unsurprisingly, is to keep rates low. This benefits those who have immediate access to newly-printed money, namely banks and corporations. Somehow, this new money is supposed to trickle down to the “poorer” classes. Not only doesn’t this happen, for various reasons explained in the article, but it actually widens the inequality gap. Either the Fed doesn’t get it, or the Fed is trying to sell snake oil decorated in virtuous rhetoric.

Fed Chair Powell was asked yesterday what the Fed can do to help reduce income inequality? Powell’s answer, like the Fed's token answer to just about everything these days, was to keep rates low for longer. His logic was that that low borrowing costs would reduce interest payments, especially for low wage earners, and provide greater disposable income.

But while that sounds good in theory, the reality is the world doesn't work that way at all.

For one, while corporations and the wealthy benefit from lower costs of capital, rates for the middle class, and certainly the poor, have barely dipped with average credit card rates just shy of all time highs despite fed funds rates hugging zero.

This was confirmed by none other than the pro-Fed, pro-Establishment Financial Times, which wrote last year that when central banks allow interest rates to approach, or fall below, what is quaintly termed “the zero lower bound” there are clear losers. Banks are presuming that households, obedient to monetary policy theory, will borrow more money at still lower rates. In fact, the reality is that “lower for longer” prevents a robust recovery because it makes economic inequality worse.

This is especially true in the US. Many American households are already living hand-to-mouth, with more debt than they will ever be able to repay. All lower interest rates do is make it harder for those who might be able to save a little to get a healthy return that might provide financial resilience today and a secure retirement in the longer term.

Low interest rates are tough on vulnerable households; negative rates are brutal. The simple mathematics of what happens to a small savings account shows why post-crisis monetary policy has made inequality so much worse.

While we will spare readers the simple math of compounding savings at the historic 5% rate of interest vs the current ZIRP, we will merely jump to the conclusion that "n a world of ultra-low rates, most households have no hope of wealth accumulation, no matter how much they save. Indeed, they are better off being profligate."

There is another reason why low rates crush lower income segment and in fact lead to even greater wealth inequality. As Bloomberg's Vincent Cignarella writes, banks provide less credit, not more, when rates are low. And this could hold back a recovery among low-income families.

The chart below shows total U.S. consumer credit, which remains below pre-pandemic levels. Without fiscal stimulus, this is likely to decline further, as it did into May. 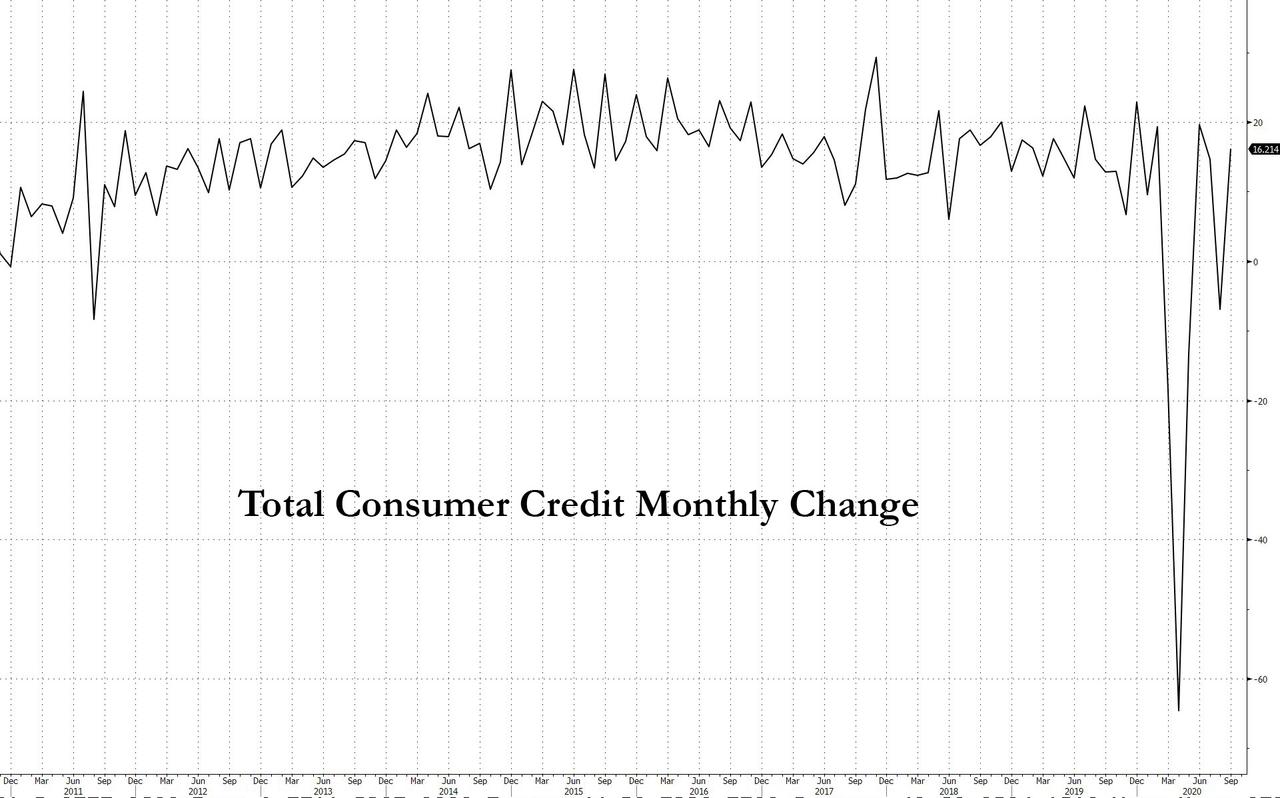 The reason credit spigots have gotten stopped up is banks face greater loan losses if incomes fall due to the pandemic, especially for low-income, higher-risk borrowers. If interest rates stay near zero for longer, banks are actually likely to pull back on consumer lending. Why? Because the only way they make money with low income or risky borrowers is to keep loan-loss ratios at levels where those who pay higher rates provide a net profit.

When rates are high, banks can afford to take chances on riskier loans because the ROI is higher across the portfolio, and those repaying more than make up for those who default. In a low-rate environment banks are more likely to pull back on lending where the risk in credit spreads doesn’t provide a sufficient buffer for loan losses. Jamie Dimon hinted at that today when during the Dealbook conference he said that "We want to bank the unbanked, but we don’t want to make it a charity thing"

On how Dimon sees different approaches to erasing the racial equality gap: "We want to bank the unbanked, but we don’t want to make it a charity thing" #dealbook

So, as Cignarella  concludes "instead of providing relief to low income earners and closing the inequality gap, low rates for a lot longer may actually exacerbate it."