The Federal Government Is 'Running Off A Fiscal Cliff', These 4 Charts Show How

EDITOR'S NOTE: Fee Stories presents four “scary charts” which illustrate how fast the U.S. government is “heading toward fiscal disaster.” The first chart shows that, even without any new federal givernment spending programs, the national deficit is projected to nearly double by 2031. Chart two shows how the Biden administration's budget, with trillions in new spending, will increase the debt to 250% of GDP by 2050. The third chart is about how “the welfare state’s various entitlement programs” is driving the national deficit, not tac cuts and military spending like progressive like to tout. Finally, chart four drives this point home by showing how little the 2017 Trump tax cuts contributed to the dire situation the U.S. economy now finds itself in.

Everyday Americans will ultimately pay the price for the federal government's recklessness. 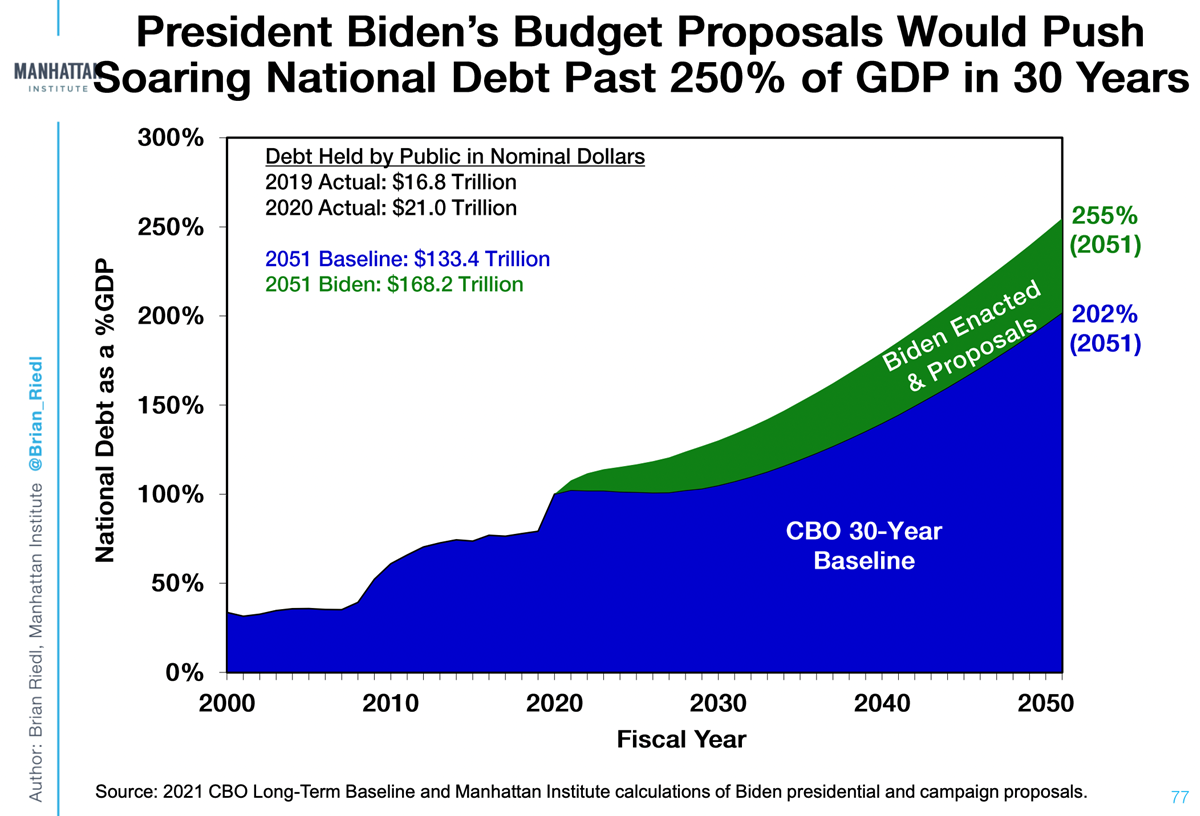 he national debt is rapidly closing in on $29 trillion. The federal government now owes an astounding $228,999 per taxpayer. All the while, politicians in Washington, DC are bickering over whether to spend $4.5 trillion more or “just” $1.5 trillion. Yet almost entirely omitted from the debate over the so-called “infrastructure” spending bonanza is the fact that the federal government is already running off a fiscal cliff—as a new analysis makes plain.

The Manhattan Institute’s Brian Riedl recently released his 2021 Chart Book, and it paints a devastating picture of the federal government’s finances. Here are 4 charts that show just how fast it is approaching budgetary disaster. 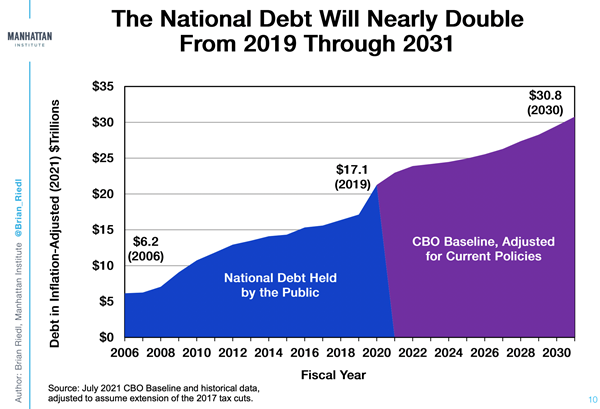 Riedl estimates the trajectory of the national debt even under the rosy assumption that new spending programs are not added. He nonetheless shows that the federal debt will nearly double by 2030.

2. Biden’s Budget Proposals Would Push Soaring National Debt Past 250% of GDP in 30 Years

What matters is not just the total debt figure, but how it relates to the overall size of our economy, as measured by Gross Domestic Product (GDP), which reflects how much the US produces in a year. Right now we’re already above a 100 percent debt-to-GDP ratio, which is normally considered a red flag, yet under Biden’s proposed additions to the budget baseline the debt would reach an astounding 250 percent of GDP within 30 years. That’s right: We’d owe 2.5 times more than we make annually. 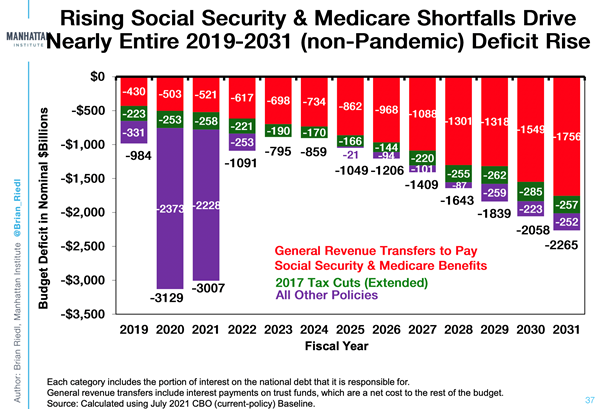 Some progressives like to cite military spending and tax cuts as drivers of the nation’s deficit woes. (And there’s certainly plenty of room for cuts in the defense budget). Yet the reality nonetheless remains that the welfare state’s various entitlement programs are what’s really driving the problem. Riedl shows that the future deficits projected through 2031 are mostly driven by the enormous funds that will be needed to keep Social Security and Medicare from collapsing.

4. The 2017 Tax Cuts are a Relatively Minor Contributor to Soaring Deficits 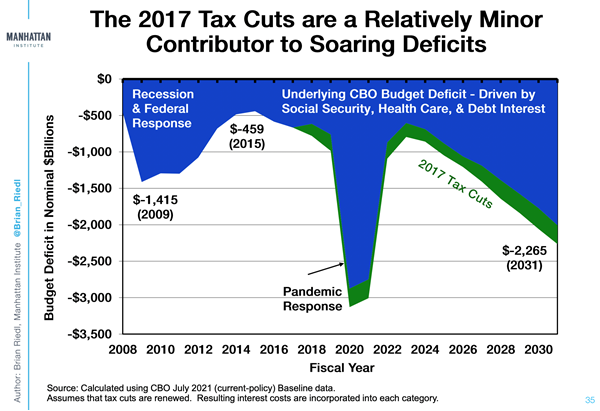 No, it is not the GOP’s 2017 tax cuts that are really driving this problem. Yes, the reductions in the corporate tax rate, income tax cuts, and other changes will likely lead to the federal government collecting less revenue than it otherwise would have. Yet that’s a small price to pay for reducing the corporate tax rate’s harsh burden on workers and more generally letting Americans keep more of their own money. And, as Riedl shows, it’s only a marginal contributor to skyrocketing projected deficits.

Why Does Any of This Matter?

Many Americans might see these figures and charts and feel their eyes start to glaze over. The federal government’s dismal finances can certainly seem like an abstract or far-away issue. But unless Congress drastically reins in its spending addiction, Americans will feel the consequences in their everyday lives.

In just a matter of years, the annual interest payments on the debt that taxpayers must finance are set to hit $1 trillion. If interest rates even modestly increase, that sum could skyrocket. Right now, even before all this new debt, taxpayers spend $800 million per day just servicing the interest on the national debt. Further progression down this path will ultimately mean massive increases in taxation.

So, too, we will face slower economic growth and lower paychecks as the debt crowds out private sector investment and drags down the economy.

“Deficit spending extracts resources from the real economy and there is no guarantee that the government uses these resources better than the private sector,” Mercatus Center senior fellow Veronique de Rugy told FEE in a previous interview.

“We are likely already paying for the heightened debt levels in the form of lower living standards,” de Rugy said. “And we will continue to suffer if we keep this up.”

What’s more, we continue to court a fiscal crisis in the near-to-medium-term future. According to the Peter J. Peterson Foundation, high levels of federal debt mean a “greater risk of a fiscal crisis” that “could further destabilize the U.S. economy and erode confidence in U.S. currency on an international scale.”

So voters should find the trends exposed by Riedl’s revelations deeply concerning. If the federal government doesn’t get its house in order, it is everyday Americans, not politicians, who will ultimately pay the price.