The Hunt Is On For Clues That Inflation Has Peaked EDITOR'S NOTE: The market’s response to the March CPI report started with a strong rally only to end the day in the red. Response to yesterday's PPI report was a bit more positive, the broader market closing up over 1%. At the center of this surge is the notion that we’ve somehow reached “peak inflation.” Bank of America analysts announced this on Tuesday; their opinion aligned with research firm Capital Economics, saying that the 8.5% CPI figure would “mark the peak.” What they’re focusing on is the difference between the headline figure, spiking 1.2% in March (month over month), versus the “core inflation” figure minus food and energy, which rose a modest 0.3%. Energy was the big inflation driver. But here’s something to think about: how certain can anyone be that energy prices will suddenly begin to ease, especially if you factor in the impact that Russia has on the global energy economy? Also, what are we to make of the US money supply which still has too many dollars chasing too few goods? And finally, can the Fed truly, and for once, pull off a “soft landing” despite its aggressive rate hike program?

The hunt is on for clues that inflation has peaked, Hope and Nathan write. Trouble is — the clues point to a jumble of entangled economic factors.

State of play: Prices for everything — electricity, cereal, airline tickets — rose 8.5% last month from a year ago, according to the Consumer Price Index for March, which was released today.

How we got here: Three rounds of stimulus checks that helped fuel historic consumer demand, while companies struggled with a shortage of workers to meet it during the pandemic.

Why it matters: Prices are rising unevenly, depending on how companies have responded to the tangled mess. Some things like cars may stabilize while daily essentials like food could continue to see higher price tags until more of the mess gets resolved.

By the numbers: Gasoline, shelter and food prices were the largest contributors to the overall rise in CPI (see the following chart).

What to watch: Oil prices have been easing and average gas prices fell for the third straight week in the first full week of April, according to GasBuddy, as gas stations are forced to compete.

The big picture: "[E]levated inflation will slow consumption, it will slow the economy and it ultimately will impact the employment/hiring dynamic in this country," Rick Rieder, BlackRock’s Chief Investment Officer of Global Fixed Income, wrote in a note today. 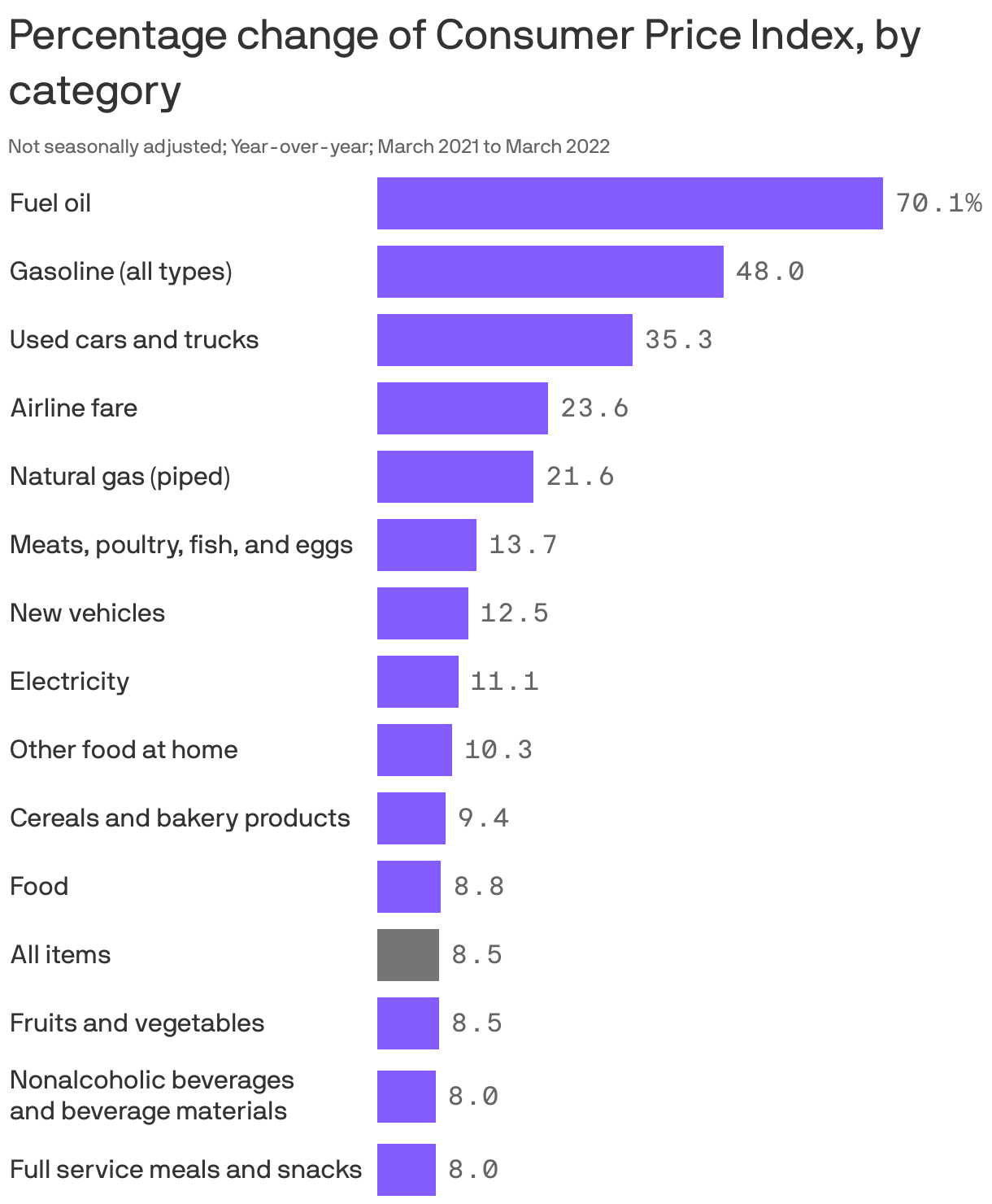