The Issue with Ruling Out a Potential Market Collapse

EDITOR NOTE: The extended bull market we are in is actually a speculative bubble. The biggest problem with that is the Fed is using monetary policy to keep this bubble going in the short-term. Over and over again in history, however, it’s been proven that you can’t make short-term outcomes better without making the long-term outcomes worse, and vice versa. On the investor side, believing that “steep market losses and extended periods of poor returns are impossible,” is keeping the bubble alive as well. As soon as investors see Fed policy become ineffective, that will be all it takes for sentiment to turn slightly. Then, the bubble will quickly burst and the market could collapse.

Investors accept in theory the premise that the stock market may have its recessions in the future. But these drops are envisaged in terms of the experience of the past ten years when the maximum decline was only 19 percent. The public is confident that such setbacks will be made up speedily, and hence that a small amount of patience and courage will bring great rewards in the form of a much higher price level soon thereafter.

Investors may think they are basing this view of the future on past experience, but in this they are surely mistaken. The experience of the 1949-1959 market – or of all bull markets put together – reflects only the sunny side of the investment. It is one thing to say airily that the market has always come back after declines and made new heights; it is another to reflect on the fact that it took 25 years for the market to reach again the high level of 1929, or that the Dow Jones Average sold at the same high point in 1919 as it did in 1942 – 23 years later.

A remarkable feature of extended bull markets is that investors come to believe – even in the face of extreme valuations – that the world has changed in ways that make steep market losses and extended periods of poor returns impossible. Among all the bubbles in history, including the 1929 bubble, the late-1960’s Go-Go bubble, the early 1970’s Nifty-Fifty mania, the late-1990’s tech bubble, and the 2007 mortgage bubble that preceded the global financial crisis, none has so thoroughly nurtured the illusion that extended losses are impossible than the bubble we find ourselves in today.

Though market valuations in 1959 were nowhere close to current extremes, it’s notable that measured from the date of Graham’s remarks, periodic bear markets repeatedly brought the cumulative total return of the S&P 500 back to or below the cumulative return of risk-free Treasury bills, all the way out to August 1982, nearly 25 years later, despite decades of inflation and strong nominal earnings growth. The Dow Industrials lagged T-bill returns for an even longer period. The worst outcome was for long-term bonds, as inflation left investors locked into the low returns that they had bargained for at the outset.

The reason for that particular trip to nowhere wasn’t that starting valuations were obscene, but that the 1982 low was one of the cheapest valuation troughs in history. Similarly, although the March 2009 market low was only moderately below historical valuation norms, it was still sufficient to wipe out the entire total return of the S&P 500 in excess of Treasury bills all the way back to May 1995. Over the 14 years from May 1995 to March 2009, passive investors enjoyed two separate bubbles, suffered two separate crashes, and ended up nothing to show for it beyond the returns of risk-free T-bills.

We certainly don’t rule out a move to below-average valuations in the future, but I don’t think it’s terribly useful to base investment decisions on expectation of depressed future valuations, much less to rely on them. In contrast, the prospect of a long, interesting trip to nowhere is more reliable once prevailing, observable valuations are already extreme. In these cases, little is required of the future other than a bit less insanity.

The chart below shows the ratio of nonfinancial market capitalization to corporate gross value-added (MarketCap/GVA), which is the single most reliable valuation measure we’ve introduced over time, based on its correlation with actual subsequent market returns across history. Notably, U.S. nonfinancial gross value-added is at a record high. The insanity you’re looking at is all numerator. 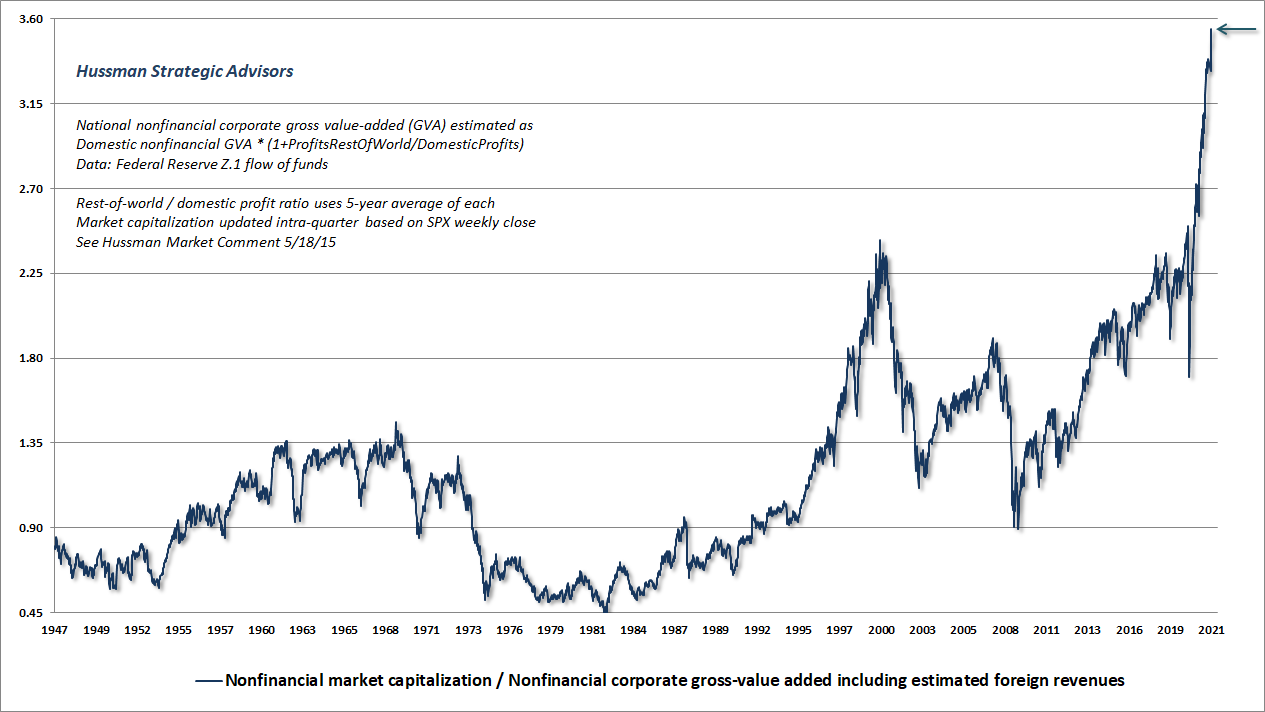 This is what a speculative bubble looks like. Jeremy Grantham is right – “Seriousness is flagged by the language that you use.” Valuations have reached record extremes while our measures of “uniformity” across market internals have shown increasing deterioration and dispersion, reflecting increasing selectivity and emerging risk-aversion. In recent weeks, this dispersion has widened further. This is serious. Among additional features of market action to monitor, keep an eye on credit spreads and low-grade bond yields, as well as any tendency for the number of individual stocks setting 52-week lows to expand – though I suspect those may coincide with stock market weakness rather than preceding it.

For investors hoping that perhaps inflation will bail the market out, it’s worth noting that valuations are typically the first casualty of sustained inflation. Indeed, the S&P 500 has historically underperformed Treasury bills even when inflation is above 2% and higher than its level 6-months earlier. It may also be useful to know that valuations have never been materially above their historical norms when the rate of CPI inflation has been above 6%. So the “benefit” of high inflation would likely be offset by plunging valuations. With MarketCap/GVA currently about 3.6 times its historical norm, it would take 22 years of 6% growth to offset that headwind. That said, for those who insist on invoking “Argentina” and “Weimar” in ordinary market discussions, yes – hyperinflation would probably begin to benefit nominal stock market returns if the consumer price index more than triples.

The scatter below shows MarketCap/GVA vs. subsequent S&P 500 returns in data since 1928. Be careful not to imagine that by chasing stocks at record valuations and negative prospective returns, you are somehow “putting your money to work.”