The New Cost Of "Food At Home"

EDITOR'S NOTE: The Fed may look to Core CPI (Consumer Price Index) to get a more accurate read on inflation, but the two items missing from the “core”—food and energy—happen to be THE two things that shape the American consumer's mood (as well as empty their pocketbooks). Food at home and gas to get to work are critical items for the American household. The recent spike in food prices is the largest we’ve seen since the late 1970s, and it's beginning to alter consumers’ shopping habits. Exacerbating the frustration, our quest for bargains is often met by an unpleasant product shrinkage, aka “shrinkflation.” And sadly, we don’t have the same flexibility with gas prices. The May CPI report coupled with the staggering drop in the Consumer Sentiment report truly broke the market’s back. We’re getting mauled by the bear and betrayed by the dollar. For most Americans, all they can do is brace for more shocks. For those who strategically allocated funds to safe-haven assets, the current economy may present a breather amid the chaos; a pause before the panic; a positioning prior to capitulation after which comes the next set of opportunities. 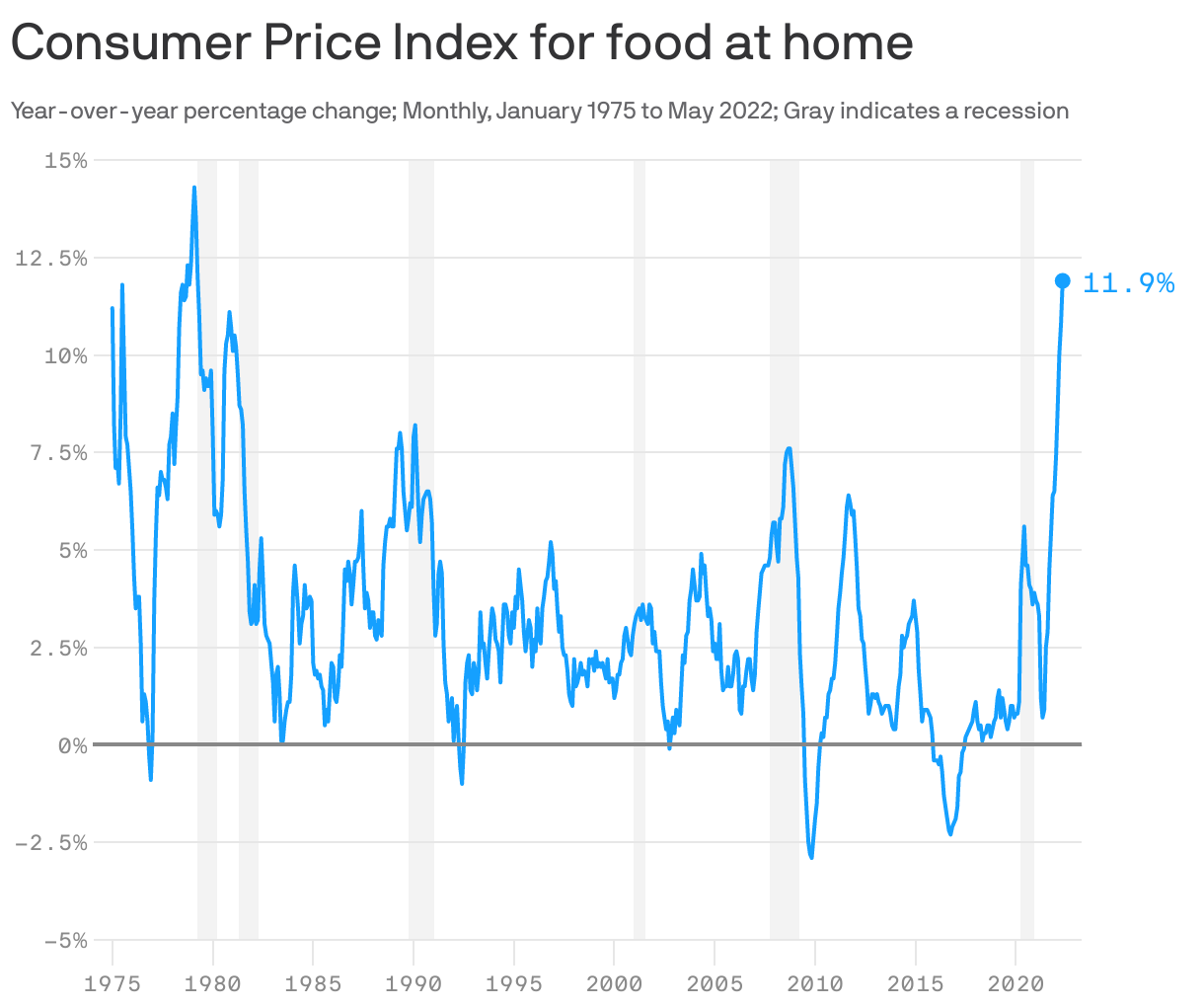 Skyrocketing food prices in the U.S. are changing the way Americans eat and shop — they're buying more store brands and less costly meat and produce. Some are just making do with less, Emily writes.

Why it matters: This is inflation hitting home, contributing to the overall bummed-out mood of the nation.

Driving the news: The cost of "food at home" is up 11.9% from last year, the largest increase since April 1979, according to the scorching hot inflation numbers released Friday.

Unusual trend: The increases in prices for food at home are outpacing food-away-from-home, which is up *only* 7.4%.

State of play: About half of shoppers who've noticed the rising prices are looking for more deals, according to a May survey from FMI, the food industry trade group; 35% are switching to store brands and 21% are buying less fresh meat and seafood.

The bottom line: Consumers have a lot of flexibility to adapt to rising food prices, in contrast to gas, where the choice is more binary — you can drive less, but you don't have any real product choices.