EDITOR'S NOTE: You probably noticed how the markets jumped at yesterday’s news of better-than-expected CPI inflation data. The Dow jumped 535 points; the S&P advanced 2.13%; and the tech-heavy Nasdaq was the biggest gainer, up 2.89%. “Wow,” investors must be thinking with a sigh of relief, “the pace of price inflation is finally peaking.” That’s only if you pay attention to the headline figure. Falling gasoline prices indeed helped. But aside from that, quite a few segments actually rose, like food and rent. Read the CPI breakdown in the article below. You might agree the rise is still enough to break the bank of many American households. And despite the possible peak we’re seeing, that alone doesn’t indicate how long these sustained record-level prices will last. The institutional outlook cited in the article doesn’t give us much of anything to be optimistic about. Yet, the market still rallied. But into what, exactly—strength, or a more significant bout of selling to come?

The pace of price increases slowed in July for the first time in months, but inflation remains close to a multi-decade high continues to inflict financial pain on millions of Americans whose budgets are strained by the rising cost of everyday goods.

The Labor Department said Wednesday that the consumer price index, a broad measure of the price for everyday goods including gasoline, groceries and rents, rose 8.5% in July from a year ago, below the 9.1% year-over-year surge recorded in June. Prices were unchanged in the one-month period from June.

Those figures were both lower than the 8.7% headline figure and 0.2% monthly gain forecast by Refinitiv economists, likely a welcoming sign for the Federal Reserve as it seeks to cool price gains and tame consumer demand.

So-called core prices, which strip out the more volatile measurements of food and energy, climbed 5.9% from the previous year, below the 6.1% forecast from economists but matching the reading from July. Core prices also rose less than expected, rising 0.3% on a monthly basis – a smaller increase than in April, May and June, evidence that inflation is starting to loosen its stranglehold on the economy.

HOW THE FEDERAL RESERVE MISSED THE MARK ON SURGING INFLATION

Still, experts cautioned that while the July slowdown is a step in the right direction, inflation remains painfully high and could be slow to return to the Fed's preferred target of 2%.

"July’s CPI report is a good start due to lower gas prices and drops in some other key categories, such as used cars," said Robert Frick, corporate economist with Navy Federal Credit Union. We’ll need a few more of these to call a peak and to see a meaningful downward trend… But high inflation is with us into next year."

Here's a breakdown of where Americans are seeing prices rise the fastest — and where there has been some reprieve from higher inflation — as they wrestle with sticker shock for the first time in a generation: 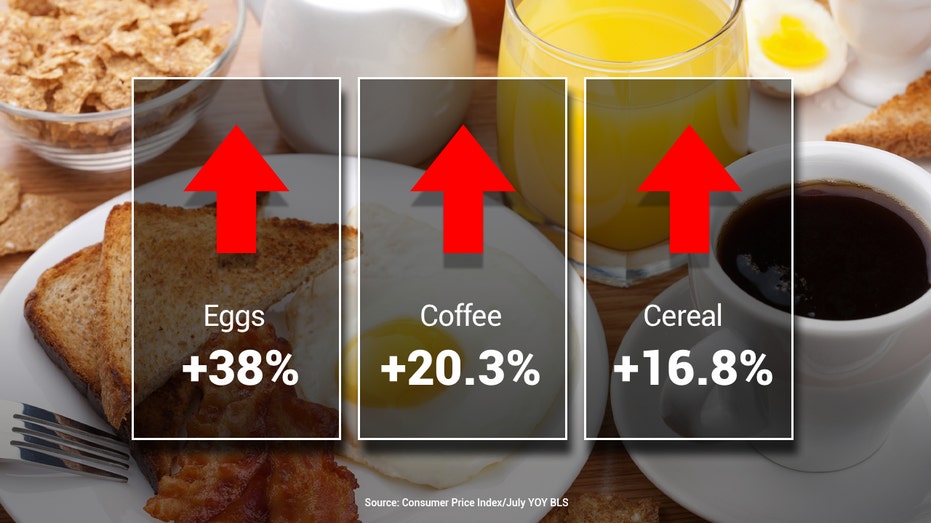 Food has been one of the most visceral reminders of red-hot inflation for Americans, with prices climbing 1.1% over the month, the seventh consecutive increase above 0.9%, according to unadjusted figures. On an annual basis, food prices have soared 10.9%, the fastest pace since May 1979.

"Food costs continued their steady march higher increasing by 1.1% and are up 10.5% from one year ago," said Joe Brusuelas, RSM chief economist. "While we are encouraged by the easing in commodity, energy, and gasoline prices, the increase in food and the jump in the cost of housing both will continue to act as a drag on overall household disposable income." 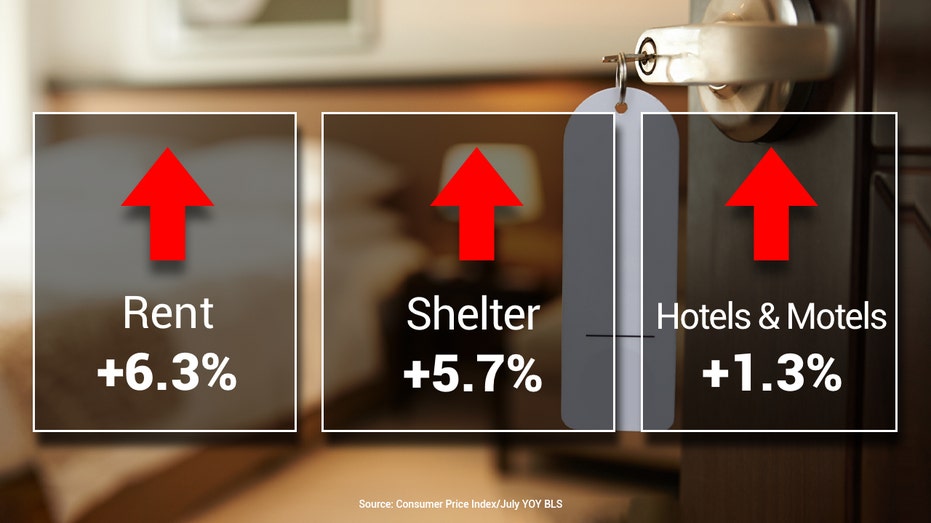 In another worrisome trend that will further squeeze U.S. households, shelter costs — which account for roughly one-third of the CPI — sped up again in July, climbing 0.6% from the previous month (just slightly below the 18-year high recorded in June). On an annual basis, shelter costs have climbed 5.7%, the fastest since February 1991.

IS THE UNITED STATES ENTERING A RECESSION?

Rent costs jumped 0.7% over the month and 6.3% on an annual basis. Rising rents are a concerning development because higher housing costs most directly and acutely affect household budgets. Another data point that measures how much homeowners would pay in equivalent rent if they had not bought their home, climbed 0.6% in July from the previous month.

"From our perspective the costs inside the housing complex have not yet finished increasing and it will likely be some months before an apex is reached," Brusuelas said. He suggested that inflation broadening out into the shelter sector could force the Federal Reserve to approve a third consecutive 75 basis point interest rate hike when it meets in September as policymakers try to cool the red-hot housing market.

In our estimation, it will be two to three years before inflation is anywhere near the Fed’s 2% inflation target," he said. 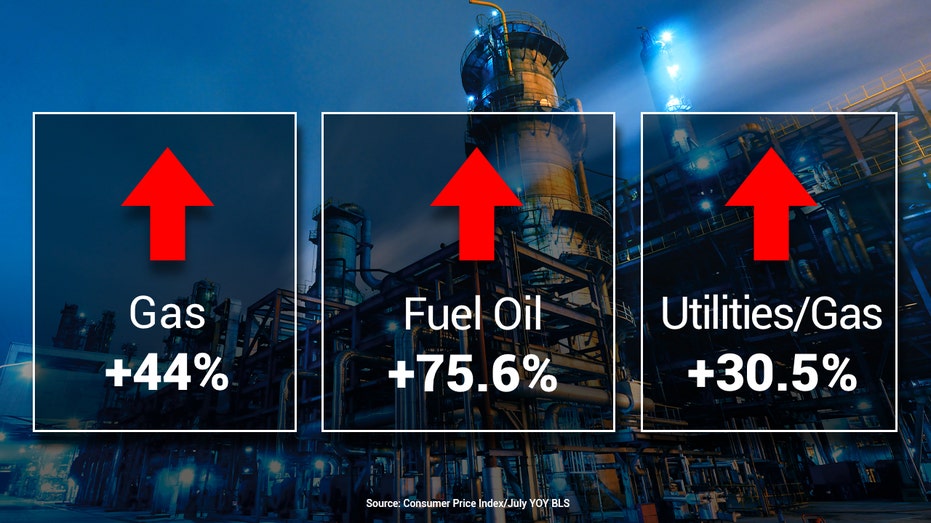 There was some real reprieve for U.S. households last month in the form of lower energy prices, which contributed to the decline in headline inflation. The cost of energy fell 4.5% in July from the previous month, though it remains 32.9% higher than just one year ago. Gasoline prices fell 7.7% in July but remain up 44% from last year.

The average price for a gallon of regular gas was $4.01 nationwide Wednesday, according to AAA. That marks a major drop from the record high of $5.01 set in mid-June, although it's still a big increase from one year ago, when prices sat at $3.18.

The drop in energy prices was not broad-based: Electricity prices, for instance, rose 1.9% and were up 15.2% from a year ago. 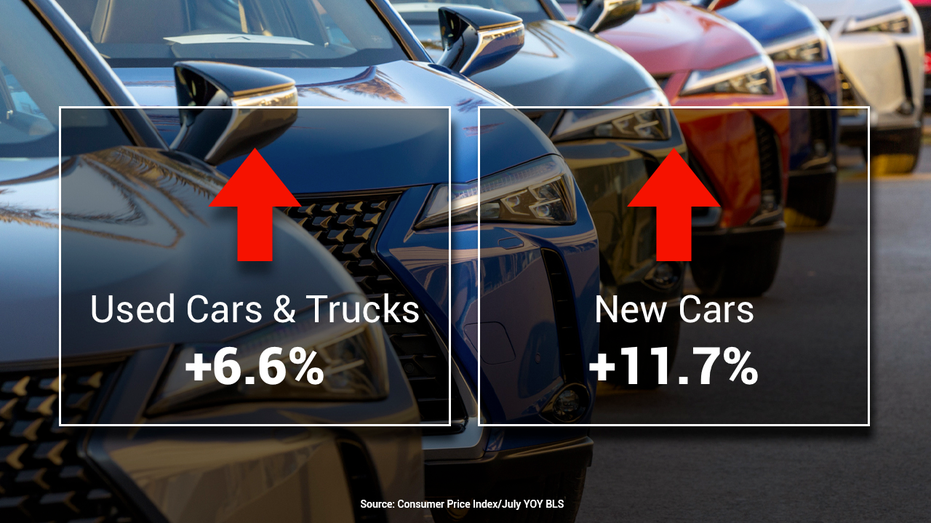 Unfortunately for Americans who needed to buy a car in July, the price of both new and used vehicles continued to march higher.

Used car and truck prices, which have been a major component of the inflation increase, are still up 6.6% from the previous year. In more bad news, prices rose again on a monthly basis in July, rising 0.3%.

The cost of new vehicles, meanwhile, is up 10.4% from the prior year, largely because semiconductor shortages continue to delay car manufacturing. On a monthly basis, the price of new vehicles jumped 0.6%, according to the unadjusted Labor Department data.

Airline fares declined in July for the second consecutive month, plunging 9.6% in the one-month period from June. Still, airfare costs are up 27.7% over the past year, according to unadjusted data — in part because airlines are passing along the cost of more expensive fuel to consumers.