The U.S. And G7 Allies Consider An Oil Price Cap On Russian Oil EDITOR'S NOTE: It’s hard to find anything that can’t be criticized or even ridiculed in Biden’s proposal of an oil price cap on Russia’s oil. To fully understand why most analysts call Biden’s proposal idiotic, you have to read the article below. Not only does Biden get the price range wrong, but the punitive measures with which he threatened Russia are also virtually ineffective. Plus, Biden has to garner consensus with the rest of the G7 nations which is unlikely to happen considering the numerous holes in Biden’s strategy. But what’s shocking in Biden’s idea is the sheer myopic perspective from which he thinks he’s solved a longer-term problem. If the west isn’t careful, crude oil prices can easily rise to as high as $380 a barrel; a far level from Biden’s $40 - $60 cap. By trying to forcibly take energy inflation down in a domain that’s apparently far above his head, he may end up increasing it by 900%.

Last week we admitted that we hadn't spent much time discussing the timesink idiocy of the Biden/G7 "Russian oil price cap" idea because well, it is idiotic as Rabobank's Michael Every explained...

The ‘oil cap’ is simple in theory: the G7 will refuse to provide insurance to any vessel that carries Russian oil unless the cargo is sold with an agreed price cap. Yet it won’t work and will just push oil prices higher. Russia will never agree. China and India will never agree either. Russia and China may offer their own underwriting services, which would force the West into physically blocking cargoes and confronting China - as a Russian-oil carrying ship is stopped in the US, says the Wall Street Journal. Plus, the G7 are already not taking Russian oil: they are taking Russian oil from India and China that is being on-sold.

... and it appears that finally even the dumbest people on earth, i.e. career politicians and economists, have figured it out. Last Thursday, Reuters reported that according to EU officials, the biggest price cap proponents - the governments of Germany and other European Union countries - voiced "caution" in a closed-door meeting about price caps on Russian oil, a day after the Group of Seven economic powers agreed to urgently start work on the matter.

Here is the truncated timeline for those who missed it: on Tuesday G7 leaders agreed to explore “the feasibility of introducing temporary import price caps” on Russian fossil fuel, including oil, and tasked ministers to evaluate the proposal urgently.

But just one day later, Germany’s envoy to the EU told his counterparts in a restricted meeting that the world should be “realistic” about the proposal, which he said was added to the G7 statement after “intense pressure” from Washington, according to one official who attended the meeting.

And then, the envoy also said an agreement on whether to apply caps was not expected to come anytime soon... or any time for that matter as it is impossible.

Then there are the holdouts: Hungary and Belgium also raised concerns at the meeting about the G7 statement on sanctions, the official said, with Hungary explicitly backing Berlin’s caution on oil price caps. A second EU official familiar with the talks confirmed that Germany and others had expressed wariness about oil price caps.

And while it would have been prudent to quietly let this idea die at this point, Europe being Europe and politicians being politicians, this idiotic proposal refuses to die and according to Bloomberg which cites 'people familiar with the matter', the White House and its G7 allies have discussed trying to cap the price on Russian oil between $40 and about $60 a barrel.

A more specific threshold would depend on market conditions when a cap is agreed and those could change significantly. Before Monday’s mini-rout in headline oil prices, Russian crude was probably trading around the $80-a-barrel mark. Information about transactions in the nation’s barrels has become less visible since the invasion.

The way they would enforce this ridiculous idea (ridiculous for the reasons none other than JPMorgan explained), would be by banning insurance and transportation services needed to ship Russian crude and petroleum products unless the oil is purchased below an agreed price. Of course, all this would do is push India and China to offer their own insurance and transportation services, chipping away some more at US superpower status.

What is remarkable is that the proposed range of $40-60 is far below where oil traded before the Ukraine war broke out in late February, effectively killing the idea before it is even rolled out... 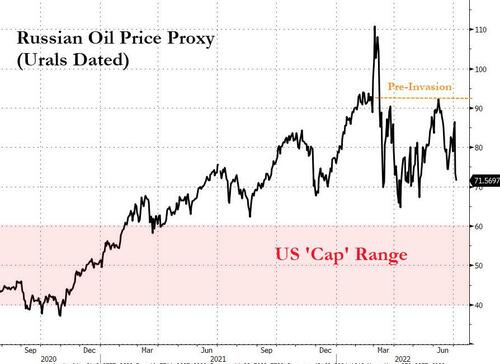 ... because not only will Russia never agree to voluntarily curbing its output, but China and India will also throw up all over the proposal. But the simplest reason why Russian oil will not be capped is because  Europe itself does not really want this proposal to pass, not least because it will incentivize Russia to simply shutter up to 5 million barrels of output, sending oil prices orders of magnitude higher, to wit:

While oil caps got a mention in the G-7 communique, there is a lot of skepticism that an agreement will be reached in the near future as the idea still needs fleshing out and there are a number of obstacles. Nevertheless, discussions are ongoing to try to nail down a concrete proposal.

Said skepticism is also why the Biden administration has so far steered away from deploying extra-territorial secondary sanctions to enforce restrictions imposed on Russia and such moves are usually seen with concern among some European allies. Their use alongside a price cap is likely a measure of last resort, according to one of the people.

Sadly, since there isn't a terrible energy-related idea that the economically incompetent handlers of the senile US president don't love according to Bloomberg Biden administration officials are having multiple meetings a week on the price cap now, trying to push it into reality, one official said. The effort will only intensify in the coming weeks.

The good news is that, as JPMorgan explained, at least some in Biden's immediate circle realize how catastrophically such a proposal would backfire: according to Bloomberg, "the US is concerned that the European ban as is, which in the EU’s case begins to come into force at the end of the year, could contribute to oil prices spiking even further -- to as high as $185 a barrel according to some estimates -- and potentially could lead to a global recession, the people said."

Another complication: to work, the US-driven idea of an oil cap would need to create enough of an incentive for countries to want to participate. Oil buyers would need access to lower prices and to the key services such as insurance that they need to transport the commodity. The threshold also needs to be set a level at which Russia would continue to export.

And therein lies the rub: as JPMorgan explained, a price threshold set too low would simply result in Russia halting output: in fact, as we explained over the weekend, according to JPM's commodities team (whose full note is available to pro subscribers), given the high levels of stress in the oil market, a cut of 3.0 mbd could cause global Brent price to jump to $190/bbl, while the most extreme scenario of a 5 mbd slash in production could drive oil price to a stratospheric $380/bbl.

In other words, the surest way to ensure oil soars to a record high is for the G7 and Biden to set a price ceiling of "only" $40-60. Judging by the stupidity of global politicians, and how amazingly Russian sanctions have backfired so far, it would not be surprising if this proposal actually were to pass, triggering the biggest surge in oil prices in history.

Our take on JPM's note (available to professional subscribers) explaining what would really happen if Russian oil prices are "capped" can be found here.