EDITOR'S NOTE: If you’re relying on Tuesday’s CPI reading and Wednesday’s FOMC announcement for clues to possibly rebalance your portfolio, take a position up or down, or decide whether to buy gold or silver, have you considered that your view of the market and economy may be too near-term, too myopic, and too fixated on the volatility that makes the day-to-day seem entertaining (exactly what CNBC wants, by the way)? Because if you are, note that Goldman Sachs, JPMorgan Chase, and Bank of America have already laid out their long-term forecasts. None of them rest on the market-moving economic reports slated every week. In a nutshell, their forecasts paint a clear picture of gray and grim. Here’s what they have to say about the economy in 2023.

“You have to assume that we have some bumpy times ahead,” Solomon said in a Bloomberg Television interview Tuesday. “You have to be a little more cautious with your financial resources, with your sizing and footprint of the organization.” That would mean a heightened focus on costs (layoiffs) and a slowdown in hiring, which the bank has already undertaken. “That might also come from pruning in certain areas,” Solomon said.

The business of Goldman, whose sellside research has turned increasingly bearish in recent weeks and sees a flat market in 2023, is closely linked to the economy, and the bank has forecast slowing growth ahead. That would mean the firm will have to make some tough decisions, Solomon said, especially since a soft landing is far from assured. Solomon said the US could see a recession in 2023, even though the firm’s economists (still) say it could still avoid one. Then again, it's the same economists whom we mocked as recently as a year ago for predicting inflation would be transitory.

“It shouldn’t be surprising to people — watching the performance of the business this year — that 2021 was an exceptional year,” the 60-year-old CEO said. “2022 is a different year, and so naturally compensation will be lower.”

The Vampire squid is also facing a tricky balancing act to keep a lid on total spending while rewarding its top performers. Solomon told Bloomberg he’s surprised by how resilient the competition for talent still is. Goldman has been cutting costs to protect profits from a costlier-than-expected foray into consumer banking as well as the global economic slowdown, which is taking a toll on dealmaking. After announcing a pivot in his retail operations and scaling down its ambitions, Solomon said that he’s now focused on achieving scale and profitability for the new streamlined business line called Platform Solutions. That unit includes the New York-based firm’s nascent credit-card business, as well as the installment-lending operation GreenSky.

Another downbeat statement came from Bank of America CEO Brian Moynihan who spoke at the Goldman financials conference, and said that while consumers are still spending more now than a year ago, the "rate of growth in spending is starting to slow" and "deposits balances are starting to come down." Moynihan also said that his bank sees three quarters of negative growth in 2023 - i.e., a recession - but the slowdown will be "mild" whatever that means.

Finally, completing the gloomy trifecta was none other than JPM CEO Jamie Dimon who told CNBC that we could have a “mild to hard recession” next year. And it wouldn't be Jamie if he didn't take a pot shot at crypto where he said tokens are like "pet rocks", or verbatim what the WSJ called gold 7 years ago, in a call which we are confident the newspaper would gladly retract 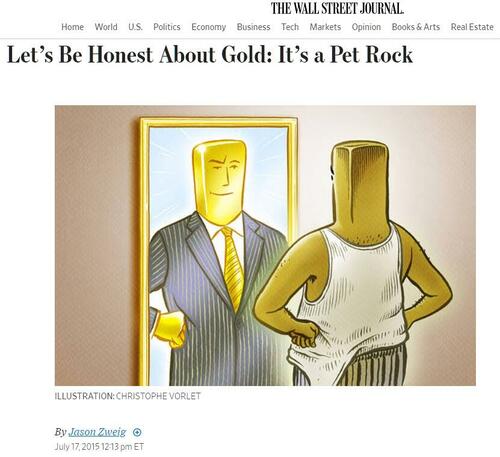