These Charts Show The Inflationary Surge

EDITOR'S NOTE: The talk about the current inflation surge is everywhere, with inflation being up in every corner of the globe. However, it can sometimes be hard to understand some of the context around inflation with all the language used around it. This is where this Swift Headlines article comes in handy. It provides several interesting charts that help add context to inflation. It shows where it is happening, how it is happening around food and our paychecks and, the good news, that it isn’t yet happening quite as badly as it did in the 1970s. These charts are definitely helpful in getting a better understanding of where we’re at with inflation in Nov. 2021.

High and rising inflation is fast becoming a global trend as the combination of surging energy costs, strong demand and supply chain disruptions continue to push up prices by more than economists expected only a few months ago.

In the US, Canada, the UK and the eurozone, consumer prices rose in October at their fastest pace inasmuch as three decades. In emerging markets such as Turkey, Brazil and Argentina, inflation rates have hit double digits.

Only in parts of Asia-Pacific, in countries such as China, Japan and Indonesia, is consumer price inflation still relatively subdued. But even there the inflationary trend is up, economists say.

“Generally speaking, inflation is running hot in countries where it slumped the most last year,” such as the US and Germany, said Sylvain Broyer, economist at rating agency S&P. It is also rising particularly fast in emerging economies, where currency depreciations have fed into higher local prices.

The inflationary surge has taken many economists by surprise. In some countries — such as the US, Canada, the eurozone, Brazil and Peru — inflation forecasts for this year have doubled in only a few months, according to Consensus Economics, a company that tracks leading forecasters.

“Economists have been caught out by a few things — energy prices, which are famously hard to forecast, and the persistence of demand for goods even as economies have reopened,” said James Pomeroy, global economist at HSBC.

Most economists still expect inflation to fall next year from current levels as the effect of one-off price increases fade away. However, they also expect inflation to last longer than previously thought, and are revising up their forecasts for 2022. 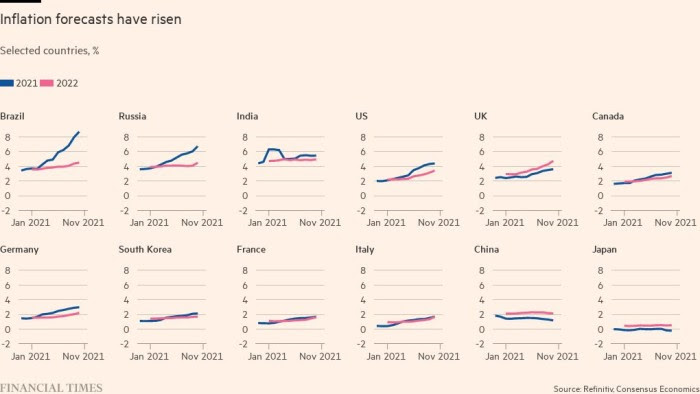 To keep things in perspective, the rise in consumer prices is nowhere near the levels reached in the 1970s and early 1980s, when annual inflation peaked at more than 15 per cent across the OECD’s 38 member countries.

Even so, the clear trend is of a sharp upward swing, which will hurt consumer pocket books and may slow economic recovery.

The one exception to the general pattern is the Asia-Pacific region. There, largely thanks to weak domestic demand and stable currencies, consumer prices as a whole are expected to rise by less than 2 per cent this year. In Japan, prices are stagnating after falling for most of the year.

Consumer price “inflation in Asia-Pacific isn’t that high,” said Ben May, global economist at Oxford Economics. That is even the case in China, where companies have absorbed a 13.5 per cent spike in producer prices rather than pass the higher costs on to consumers.

However, even there the number of countries with rising inflation grows almost daily.

As of September, about two-thirds of the 100 countries and regions that Consensus Economics tracks are expected to have inflation of 2 per cent or more this year. A few months ago, less than half were forecast to breach that level. Similarly, the number of countries forecast to have high inflation next year is rising rapidly. 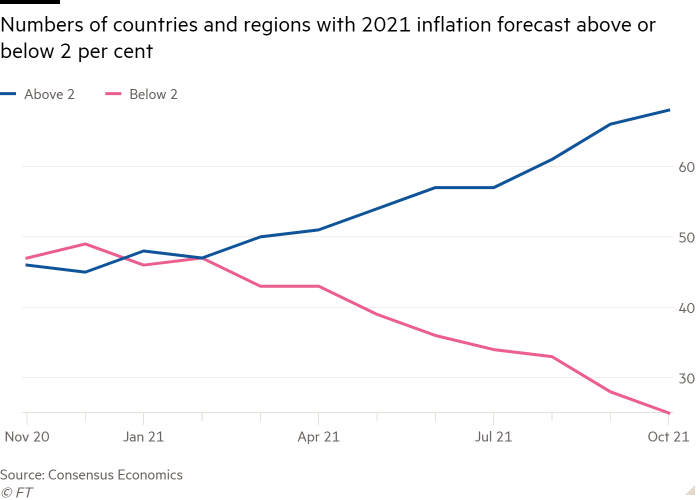 One of the main factors pushing up prices generally is the surge in energy costs.

Across the OECD, consumer energy prices rose in September by an annual rate of nearly 20 per cent, their fastest increase since 2008 and five times the headline inflation rate. That in turn has fed through into other prices.

Food inflation also increased in September by one percentage point to 4.5 per cent, compared with the previous year.

But even if food and energy inflation are stripped out, OECD consumer inflation still doubled to 3.2 per cent over the same period.

“Higher energy prices are rippling through the economy — pushing up the costs of other raw materials and then feeding into those costs too,” said HSBC’s Pomeroy.

The big question is whether the current inflationary surge proves to be temporary or more permanent. That largely depends on whether the rise in prices leads to unstainable wages increases.

So far, though, there is very little evidence of that happening in “whatever metric you look at,” S&P’s Broyer said. 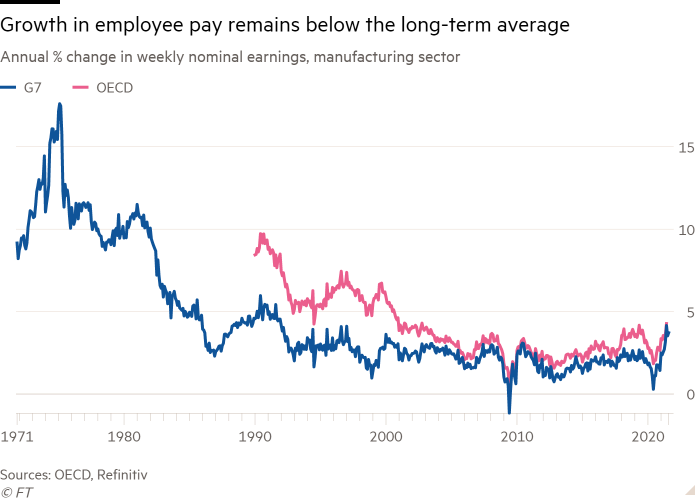 Denial of responsibility! Swiftheadline is an automatic aggregator around the global media. All the content are available free on Internet. We have just arranged it in one platform for educational purpose only. In each content, the hyperlink to the primary source is specified. All trademarks belong to their rightful owners, all materials to their authors. If you are the owner of the content and do not want us to publish your materials on our website, please contact us by email – admin@swiftheadline.com. The content will be deleted within 24 hours.