Update (1420ET): It looks like news wires like Bloomberg and Reuters have gotten a hold of that memo, or at least the details, judging by these headlines.

Around the country, millions of Americans are anxiously wondering when their stimulus checks will be arriving, as they hope to God that they have a job to come back to, or that - if they've already been laid off - the government stimulus money manages to save their employers and help them get their jobs back.

But as President Trump has said several times during the White House's daily press briefings, nothing like this has ever been done before. And while it sounds simple, as we explained the other day, handing out $2 trillion (or at least the amount that's been earmarked for unemployment expansion and stimulus checks) is harder than it sounds.

And as the administration continues to string people along - Steven Mnuchin said last week that "our expectation is three weeks" for those who have depository information on file - whispers about the timeline for the payments are seeing the 'whisper timeline' number are seemingly growing in proportion.

And now, CNN is now reporting that instead of the three week timeline that Mnuchin gave last week, which would have resulted in checks going out the week of April 6, the first checks likely won't go out until the week of April 13, and - what's worse - it could as long as 20 weeks for all the stimulus checks to go out, leaving millions of poor and desperate Americans (many of whom voted for President Trump) twisting in the wind.

Americans likely won't begin to see direct payments from the coronavirus stimulus bill until at least April 13 and it could take 20 weeks for all the checks to be mailed, Trump administration officials told lawmakers, according to a House Democratic memo obtained by CNN.

The timeline means tens of millions of Americans will have to wait to get badly needed assistance, despite repeated suggestions from Treasury Secretary Steven Mnuchin that the money would go out as soon as April 6. He said this past Sunday after passage of the $2.2 trillion stimulus bill that payments would not go out until mid-April.

CNN reported in March that former IRS officials said the wait would likely be weeks or months.

According to the memo cited by CNN, the IRS is expected to make about 60 million payments, likely starting during the week of April 13, for taxpayers who provided their direct deposit information via their 2018 or 2019 tax returns. Three weeks later, the IRS expects to start issuing paper checks to individuals whose bank information isn't already on file, a process that will take significantly longer. House Democrats expect that up to 5 million checks can be issued per week.

For those who don't have tax information on file, the checks will take even longer.

All of the information is based on conversations with Treasury and the IRS, the memo said.

And all of this is after a group of Democratic Senators pushed for a change in guidance that Elizabeth Warren said would get money into the hands of seniors' faster.

I joined @SenatorHassan, @SenSherrodBrown, and 31 other senators in urging @USTreasury Secretary Mnuchin & @SocialSecurity Commissioner Saul to reverse the IRS’s guidance and provide stimulus payments to Social Security beneficiaries even if they don’t file tax returns. 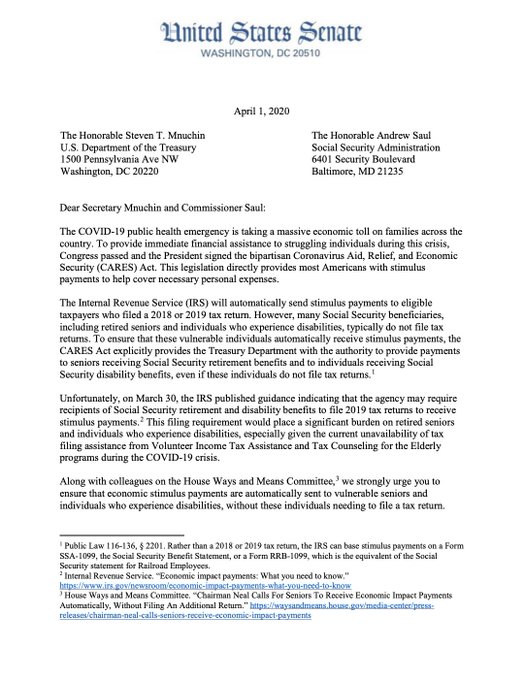 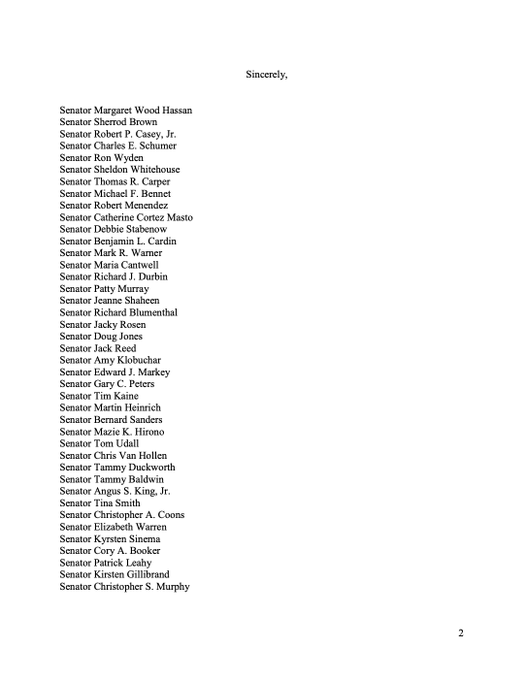 Bottom line: If the Trump Administration doesn't figure all of this out quickly, the stimulus bill rollout could become the biggest government debacle since the rollout of healthcare.gov.