EDITOR'S NOTE: The US equities markets may be rallying hard this morning following news of lesser-than-expected jobs numbers, but there’s no denying the global storm clouds that are slowly making their way toward America’s economic shores. Saudi Arabia recently slashed the price of its oil exports to Asia and Europe. This move further supports the notion that a global recession is well underway. Still, analysts differ in their forecasts regarding how long the price slump may last. You can also notice the differences in outlook when comparing the opinions of top-down economic analysts to bottom-up industry analysts. Here’s one take on the matter. And remember: Although the shape of economic cycles is predictable, the duration of each phase isn’t. While monetary policy plays a significant role in economic cycles, the environment remains dynamic (think: Covid, war, etc.).

Brent crude futures have slumped from almost $125 a barrel in June to less that $80, with prices dropping another 7.5% this week.

Saudi Arabia cut oil prices for its main market of Asia and for Europe, signaling that demand remains sluggish as economies slow and coronavirus cases in China surge.

Brent crude futures have slumped from almost $125 a barrel in June to less that $80, with prices dropping another 7.5% this week. High interest rates and a strong dollar have weakened energy consumption among businesses in the US, Europe and China. Kristalina Georgieva, the head of the International Monetary Fund, this week said she expected one-third of the global economy to enter a recession this year. 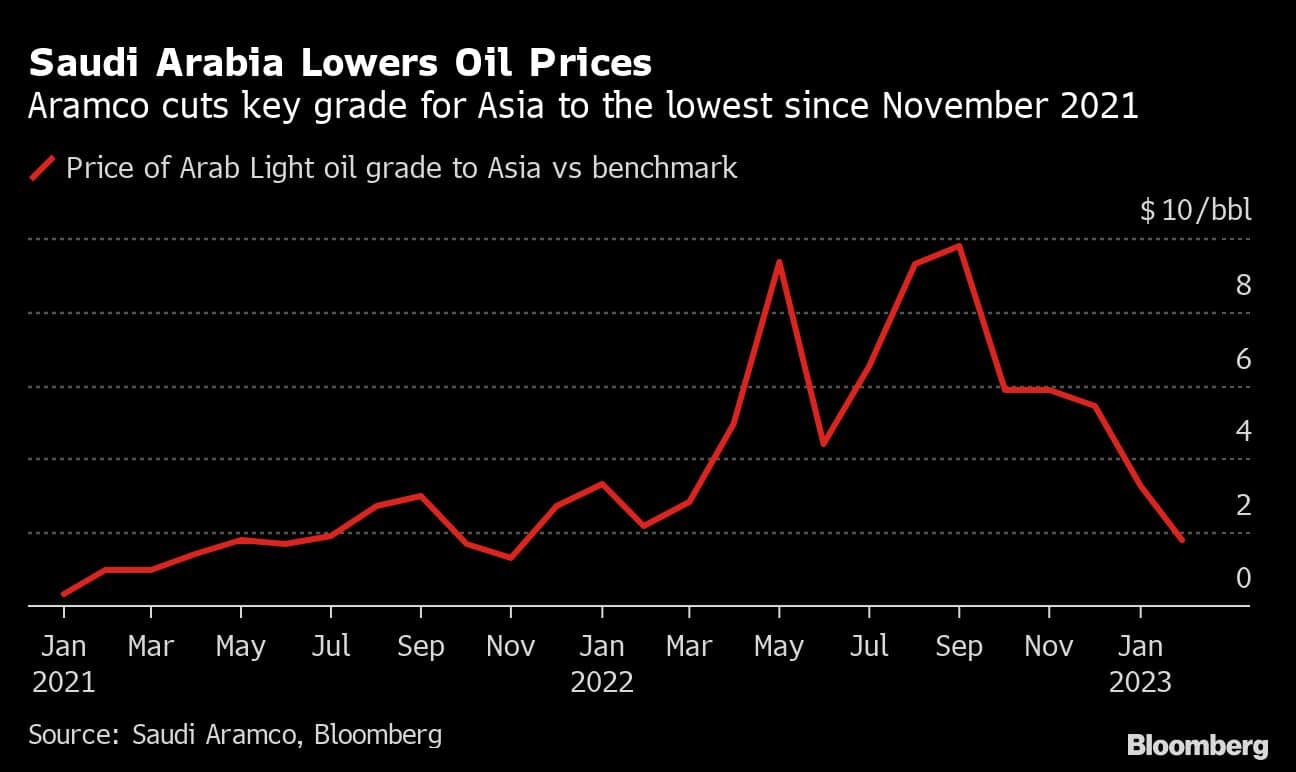 State-controlled Saudi Aramco reduced prices for all types of crude that will be shipped to Asia in February. The company’s flagship Arab Light grade was lowered to $1.80 a barrel above the regional benchmark, $1.45 less than the price for this month. It’s now at its lowest level since November 2021.

The cut was roughly in line with a Bloomberg survey of traders and refiners.

Aramco also reduced prices for shipments to north west Europe and the Mediterranean region. It kept costs for US customers unchanged.

Saudi Arabia sells about 60% of its crude exports to Asia under long-term contracts, pricing for which is reviewed each month. China, Japan, South Korea and India are the biggest buyers. Its moves tend to be closely followed by other Persian Gulf producers such as Iraq and Kuwait.

Many oil traders expect prices to rebound in the second quarter as China’s Covid outbreak eases and, potentially, Russian supplies drop due to sanctions related to its invasion of Ukraine.

Last month OPEC+, a producers’ cartel led by Saudi Arabia and Russia, decided to keep crude output steady after lowering it by 2 million barrels a day in October. The group is scheduled to meet next in June, thought it could convene sooner if prices continue to drop.