EDITOR NOTE:  Yesterday, the Tokyo Stock Exchange was forced to halt trading when it experienced glitches due to a hardware defect. This placed Japan’s PM Yoshihide Suga--a staunch “digitization” advocate--in an embarrassing position. Digitizing financial infrastructure remains a top policy priority in his administration. And the TSE glitch just showed the country how fragile such a system can be. This wasn’t the first time either--it crashed in 2005 and 2018 due to software and hardware errors. When a disproportionate amount of a country’s wealth is vulnerable to severe disruptions due to the smallest of errors--a downed line, a fat finger, a glitch in the software code--what is the “true” cost of progress, speed, and efficiency? In contrast, tangible assets like gold and silver can’t be wiped away at the push of a button, a stutter in the code, or a small defect in the hardware. Technological progress comes with its negatives, In the case of financial digitization, the negatives may far outweigh the payoffs of progress.

The Tokyo Stock Exchange halted trading of all listed shares for the entire Thursday session due to a system glitch, making it the first full-day suspension since the world's third-largest bourse introduced a fully computerized system in May 1999.

The TSE said it will resume trading Friday, but the breakdown dealt a blow to Prime Minister Yoshihide Suga who pledges to make digitalization a top policy priority and Tokyo's efforts to attract more foreign financial institutions and talent in a bid to become a global financial hub.

Speaking at a news conference, TSE President Koichiro Miyahara apologized to investors, market participants and listed firms for the fiasco.

"We apologize for halting this important infrastructure for the capital market the whole day at a time when the government is studying how to make Tokyo a global financial center," Miyahara said.

According to the TSE's operator Japan Exchange Group Inc., or JPX, the market capitalization of listed companies on the TSE is the third-largest in the world, behind two U.S. bourses. About 3,700 companies are listed.

The malfunction stemmed from a defect in hardware in the bourse's trading system, and JPX failed to automatically switch over to its backup system. 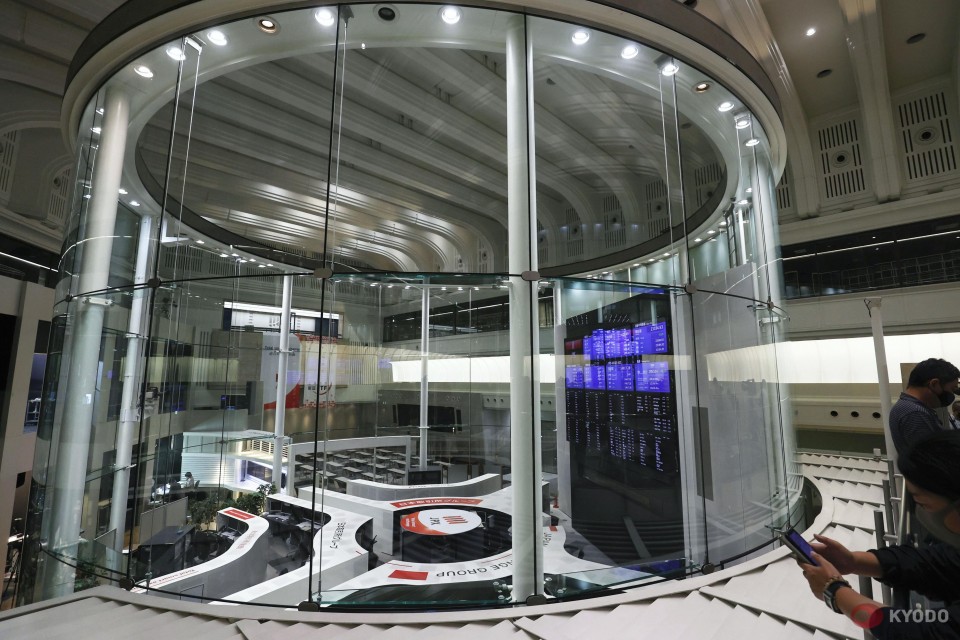 Photo taken Oct. 1, 2020, shows the Tokyo Stock Exchange after all stock trading was suspended earlier in the day due to a system glitch. (Kyodo)

The faulty hardware was replaced and handed over to Fujitsu Ltd., its developer, for further investigation, the TSE said. Orders placed Thursday will be canceled and market participants need to renew their orders on Friday.

Fujitsu said in a statement that it will step up cooperation with the TSE to prevent a recurrence of such malfunction.

Miyahara said the TSE has no intention of filing a damages suit against Fujitsu as the bourse was responsible for market operations.

The Financial Services Agency plans to order the TSE to report the case, and the regulator is expected to order the bourse to take measures to prevent a recurrence.

Meanwhile, the Tokyo Commodity Exchange was not affected. Futures trading on the Osaka Exchange is processed by a separate system and proceeded as usual, according to JPX.

The system failure on the first trading day of the second half of the business year for many Japanese companies closing their books in March disappointed some market watchers.

"If the market had opened, stocks were expected to rebound though they may have been top-heavy. It's disappointing," said Makoto Sengoku, a market analyst at the Tokai Tokyo Research Institute.

On Wednesday, the Nikkei ended down 353.98 points or 1.50 percent from Tuesday at 23,185.12, after U.S. President Donald Trump and Democratic challenger Joe Biden clashed in a chaotic first presidential debate, adding to uncertainty over future policy in the world's largest economy.

"We're closely watching the situation because the glitch may trigger selling from tomorrow, as it's definitely not good news," Sengoku said.

Some investors expressed anger at the breakdown, saying the incident shows the TSE is not prepared for possible system failures.

"I want the TSE to investigate and take thorough measures to prevent any recurrence of similar incidents," said Toshifumi Shinohara, 55, who had intended to sell his NTT Docomo Inc. shares on Thursday.

Separately, an investor in Tokyo's Shibuya Ward said he worries the halt may affect the credibility of the Tokyo market.

"The suspension dampened the upward momentum of the Nikkei," said the investor, speaking on condition of anonymity.

Thursday marked the listing date for three companies, including Hirogin Holdings Inc., which has Hiroshima Bank Ltd. and four other units under its umbrella, but their shares were untraded.

A large-scale Tokyo bourse system failure in November 2005 that suspended all shares' trading for about three hours was caused by a defect in a software program used to process data from securities companies. All exchange executives were given a pay cut at that time.

In 2018, one of the four lines in the trading system linking it and securities firms went down and remained offline for a day.

The problem was caused after it received an extraordinary amount of data from a brokerage during a routine checkup of the system.