EDITOR NOTE: Banks and financial institutions flush with cash have flocked to the Fed’s reverse repo (RRP) facility. What this means is that they’re loaning the Fed money at zero interest. The danger is that if enough cash surges into RRP, key short-term interest rates can fall into negative territory--below zero. After this week’s FOMC announcement, reverse repo volume hit a record $755.8 billion, a troubling surge--virtually a tsunami of cash parked at the Fed’s facility. What does this mean when looking at the big picture? There’s too much cash in the financial system. Banks have few investment alternatives other than parking it at the Fed. Most importantly, this may signal that quantitative easing is done and the Fed needs to taper. And when this happens, asset valuations will undergo a fundamental reckoning, US treasury yields will likely spike, and a massive wave of panic selling will hit the stock market, taking every inflated asset down with it. If most of your money is tied up and floating in the stock market, be warned that a large portion of it may be erased. Better to hedge now with safe-haven assets, notably Non-CUSIP physical gold and silver, or be willing to see a massive negative revaluation of your personal wealth.

While it received far less attention that the Fed's dot plot, the only thing that the Fed actually did change yesterday were its administered rates, as it raised the rate on its overnight Reverse Repo facility from 0% to 0.05% and the rate on excess reserves (IOER) from 0.10% to 0.15%. 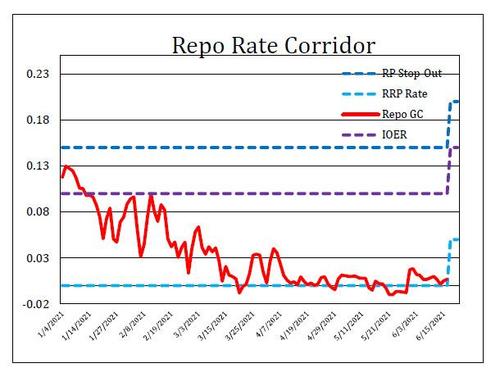 Since the RRP hike meant the GC rate would also have to increase, we noted last night that "with both market rates and RRP at .05%, there's really no economic incentive for cash investors to move cash to the Repo market."

Furthermore, now that the Fed is actually paying counterparties a modest but non-negligible 5bps on reserve deposits, it has made the RRP even more attractive compared to when it paid nothing (when the RRP rate was 0.0%), as it now generates a higher risk free yield than many short-term Bills.

As such, we concluded that if it was the Fed's intention to reduce participation in its Reverse Repo facility (which the Fed specifically expanded back in March knowing what was coming) it would fail.

And wow, did it fail: moments ago we got the first Reverse Repo results from the new post-FOMC regime, and boy was it a whopper: coming at $755.8 Billion among 68 counterparties, there was a tsunami of new reserves parked at the Fed, as the total was a massive $235 billion more compared to the $520.9BN (among 53 counterparites) yesterday, the biggest one-day increase on record as every Tom, Dick and Harry rushed to collect the Fed's free pennies. 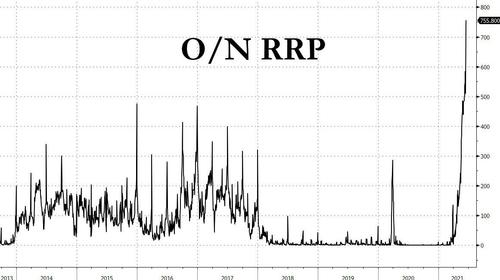 One explanation for the surge is that as UBS noted earlier, the Fed's adjustment "is likely to make the RRP grow even more, in part due to new usage by GSEs who can now earn more than the zero they get on their deposits at the Fed." That, UBS added, takes reserves out of the banking system, which should slightly reduce the odds of balance sheet stress at year-end." Separately, since this is the first TOMO with the new 5bps RRP rate, we could be seeing a temporary spike as market rates adjust to the new lower bound.

In any case, while the Fed has so far been ignoring the massive drain in reserves courtesy of its Reverse Repo, as this facility is headed toward $1 trillion, Powell may want to consider the continued fracture to the repo market and also the pockets of illiquidity that may be forming as some counterparties remain flooded with reserves while others have virtually no reserves intraday as they are locked up at the Fed until the next day.

We look forward to Zoltan's thoughts on this troubling surge in a few hours.