EDITOR NOTE: Last month’s government revenue and spending went more or less unnoticed by the mainstream investment crowd, not because the figures shouldn’t have sounded an alarm, but because everyone’s beginning to normalize more of the same. The government ended up spending around 90% more than it took in revenue--$4.075 trillion in outlays versus $2.14 trillion in income. As you probably know (or not), the US typically sustains the largest spending deficit across the globe. That hasn’t really discouraged international investors from investing in the US. But America’s national debt is starting to change the perception regarding its credit status. The government, as well as corporations issuing debt, may have to raise their yields to attract new investment--neither a good prospect for the market nor the direction of consumer prices (it’ll likely rise). And of course, the money owed is money to be paid with tax revenue. The claim on your future income has been extended and is multiplying as the value of the dollars you need to repay it is being fractionally reduced. In short, it’s time for a hedge, and physical gold and silver are the only reliable assets to help you achieve capital preservation and growth.

With "base effect" all the rage this month, moments ago we also got the 1-year anniversary of the Covid crash in the US budget deficit dataset when the Treasury reported the April government revenue and spending. And while the data in isolation wasn't pretty, it was absolutely stellar compared to last April's blowout $738 billion deficit.

Last month, the US collected $439.2BN in receipts, a solid improvement to the $267.6BN in March and 81.6% higher than the $241.9BN in receipts collected last April when the US economy was in freefall. Of note: $7.2BN of the money collected by the Treasury included $7.2BN in Fed remittances from "profits" on the Fed's QE.

Outlays, while ugly at $664.8BN, were also an improvement compared to the $927.2BN the US spent in March when it funded the latest Biden fiscal stimulus, and down 32.2% from the $979.9BN last April when the Trump admin unleashed the first stimulus. 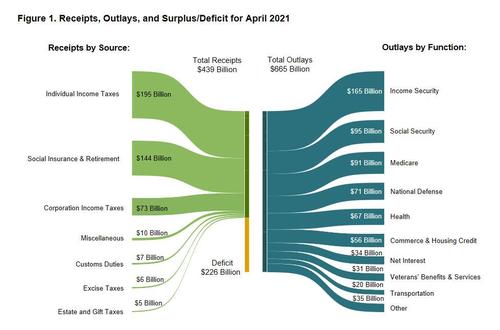 Yet despite the modest relative improvement in April, on a year-to-date basis the picture has never been uglier: in the seven months through April for Fiscal 2021, the Treasury collected $2.14 trillion in receipts while spending 90% more, or $4.075 trillion. 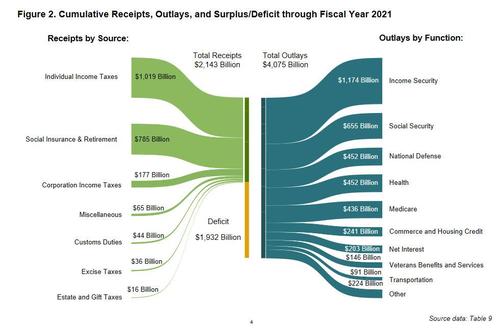 As a result, seven months into the fiscal year, the YTD deficit stood at a record $1.932 trillion compared to $1.481 trillion, although whether 2021 overtakes 2020 depends on if and when Biden will pass his next (of many) stimulus programs. 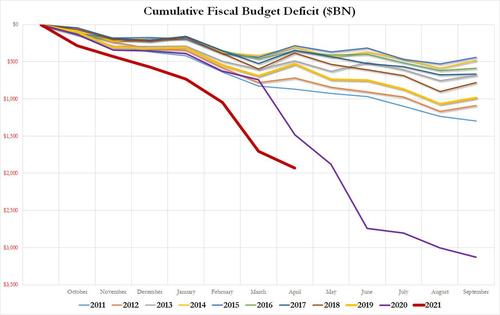