EDITOR NOTE: Both the yellow and white metals took a sharp slide today as the July Employment Situation (more informally referred to as the jobs report) delivered numbers that nearly matched analyst expectations. Non-farm payrolls increased 943,000 in July and the unemployment rate slid to 5.4%. Most of the job growth was in leisure and education. This boosts optimism on Wall Street and signals a “risk-on” play to pile into the stock market, even at its current valuations which everyone knows are too high. Gold, on the other hand, remains “the most under-owned, least crowded trade in the global financial markets. … The era in which gold was the asset that people loved to hate and hated to love is starting to come to an end. We’re still in the very early innings. It’s still a smart money trade as opposed to a big passive money trade but that’s about to happen,” according to Electrum Group’s Thomas Kaplan. Wise words indeed. The likelihood of Fed tapering increases as the labor market tightens. Still, this does not spell the end of the inflationary trend that’s just getting started. Inflation is a monetary issue, and with the money supply at record highs, a single on-target monthly jobs report is not going to signal that every hazard threatening our economy is suddenly going to disappear. With prices rising, an overvalued stock market, a looming taper tantrum, and new delta variant cases rising, gold and silver will likely be the “generational trade” to define the coming decades.

With consensus expectations calling for a July payrolls print of 858K and whisper numbers starting at 1 million and rising (and Goldman going so far as expecting 1.175MM), moments ago the BLS reported that in July payrolls came in at a goldilocks 943K, comfortably beating the consensus but below the 1MM print that could be considered a clear trigger for "substantial progress" for Powell, although likely sufficient for the Fed to signal the start of tapering at Jackson Hole. 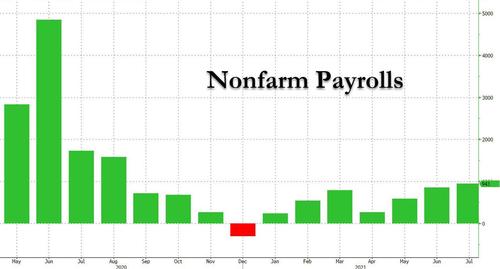 One quick note: while the headline number was solid, more than half of the job gains came from leisure and hospitality jobs (+380K), i.e., bartenders, waiters, hotel workers and so on, and another 261,000 came from education. Also worth noting - unadjusted for seasonal factors, employment actually dropped by 133,000. That’s mainly due to a big drop in government jobs. Private payrolls, unadjusted, climbed 779,000. 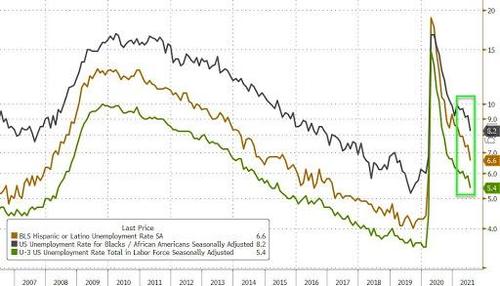 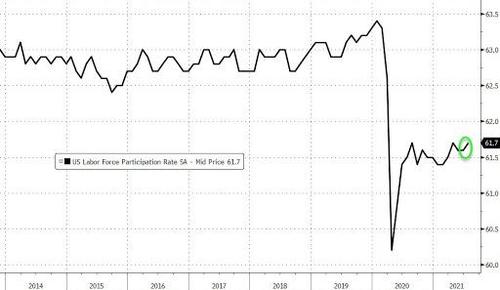 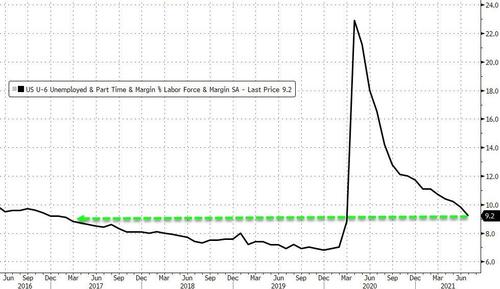 There were also good news on the wage front with average hourly working surging by 4.0% Y?Y, the highest since March. 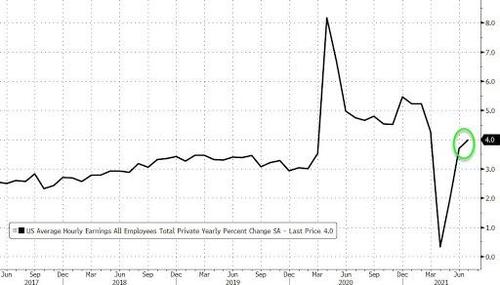 And another clear indication of "substantial progress" - the number of temporary layoffs has now plunged to pre-Covid levels. 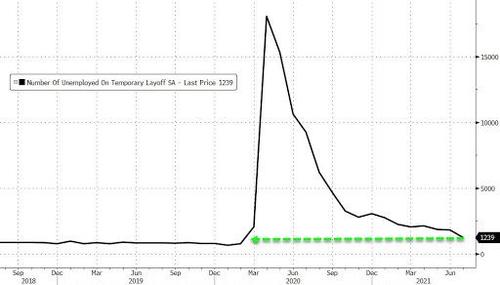 A quick look at the composition of job gains:

Looking at the market reaction, while rates spiked on the print, so did futures, suggesting that at least in its kneejerk reaction, the market is viewing good news is being interpreted as good news, a contrast to the trend we’ve seen in the past year. However as traders digest the report and realize that tapering is coming, spoos and QQQs are taking on water and today could well be the trigger that breaks the S&P's 4,400 magical gravitation. Meanwhile the spike in the dollar indicates that bets on tightening and an early taper are again all the rage.