EDITOR'S NOTE: The US labor force participation rate in November dropped for a third straight month. It turns out that the Great Resignation, though stalled, hasn’t yet reversed course. Simply put, businesses still can’t find enough workers. Yet overall, job growth, for the few businesses that were able to hire, came in a little too hot for the Federal Reserve, likely stalling its plans of slowing the pace of rate hikes. It’s important to understand that the Fed is really worried about wage inflation. Increased job growth can lead not only to higher consumer demand but also wage demand, both of which can fan the fires of an overheating economy. Yet, despite the surging job numbers, businesses are still looking to hire. In short, the Fed is facing a real dilemma amid an inflation crisis that’s looking to burn much hotter.

The share of Americans either working or actively looking for a job fell to 62.1%, according to government data released Friday. The rate had risen to 62.4% in August, matching a post-pandemic high reached in March, but remains significantly below where it was before the pandemic.

“We got no help from the participation rate, which continues to move in the wrong direction and will keep competition for labor high until the economy inevitably rolls over sometime next year,” said Cliff Hodge, chief investment officer at Cornerstone Financial. 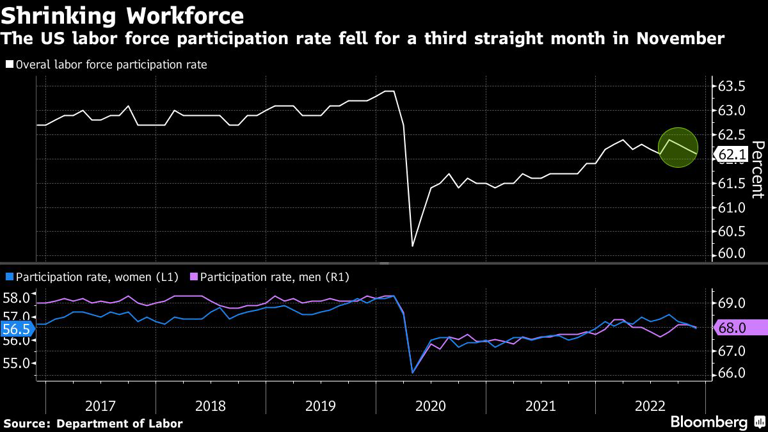 The US labor force participation rate fell for a third straight month in November© Source: Bloomberg

Concerns about Covid-19, trouble finding child care, early retirements and suppressed immigration have all contributed to a subdued workforce.

The drop in participation is bad news for Federal Reserve officials, who have aggressively been rising interest rates this year as they try to tame inflation. They were hoping that cooling the economy would lure workers back to jobs. It hasn’t happened yet.

The participation rate for so-called prime-aged workers, those aged 25 to 54, also dropped, to 82.4% from 82.5%. And it, too, remains below its pre-pandemic levels.

While participation declined for both men and women, a larger share of female workers left the labor force last month.