EDITOR NOTE: The notion that the Fed is becoming increasingly powerless in its attempts to boost real economic growth yet effective in buoying market valuations is an overstated and  worn-out narrative. During the last FOMC meeting we got what we expected: interest rates near zero and printing presses on until inflation and employment goals are met. So, naturally, the dollar is going to fall. Cheap imports for other countries, and competitive footing with other economies offering similar imports and prices, this zero-sum-game of paper has very little to do with real economic production in the US. The article below provides some interesting details to better wrap your head around the current dilemma. What this article doesn’t really address is its impact on gold. Gold moves inverse to the dollar and to inflation. So with all the bad news concerning the state of the greenback, all of it constitutes bullish tailwinds for the yellow metal.

The Dollar buckled again Thursday after wading knee-deep into losses against all majors in moves that risk making it a global problem, sooner or later and once again, as upbeat investor sentiment and Federal Reserve (Fed) policy contribute to a rout that has deep-seated economic problems as its foundations.

Dollars were sold widely and by the bucket load, leading many counterparts to multi-year highs against the greenback, in moves that were attributed by some analysts to a possibly-imminent agreement in Washington to cough up more financial support for American households and companies.

But there were other factors also at work too including on the other side of each of the declining Dollar exchange rates, which sold off heavily overnight following an initial knee-jerk move higher in response to Wednesday's final Federal Reserve policy decision of 2020.

"It was a bit frustrating to observe the market’s reaction to keep selling USD when all was said and done, because none of what Jerome Powell said was new information and no new policy action had been announced, but we had to respect the price action (which is always what matters most) and the fact of the matter was it produced quite negative NY closes for the dollar," says Eric Bregar, head of FX strategy at Exchange Bank of Canada. 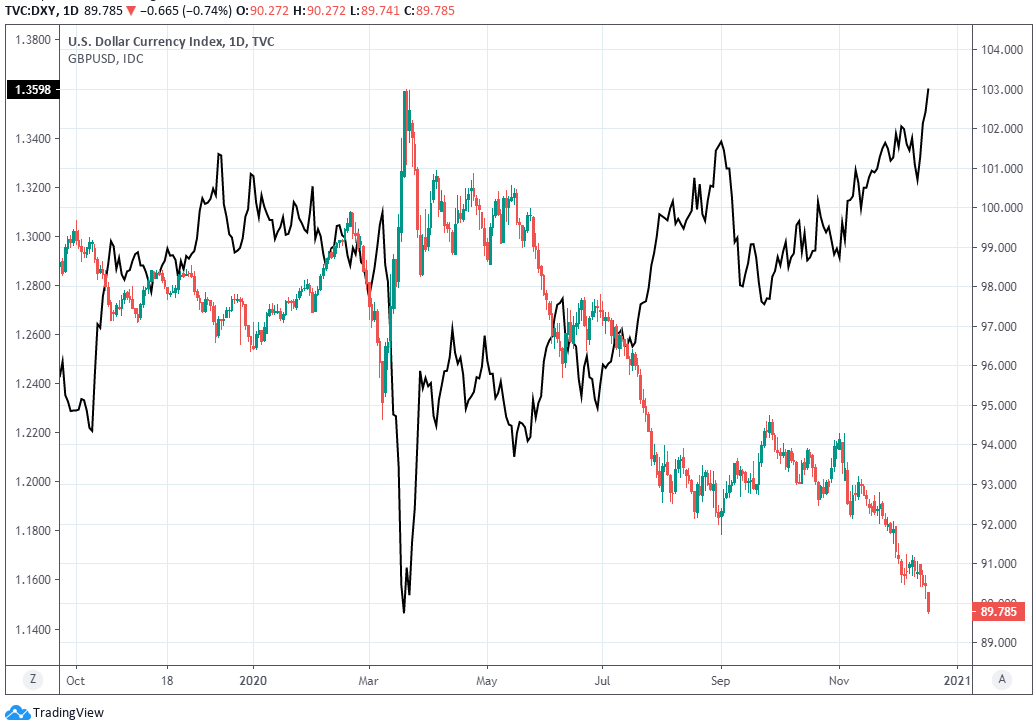 Fed officials made what was initially perceived as a half-hearted attempt at aiding the U.S. economy in its battle with a third and largest wave of coronavirus infections to date when it left all policy instruments unchanged ahead of year-end before arguing that what it's already doing is enough for the time being.

The Fed did add something when appending to its statement some guidance about the likely duration of its quantitative easing, which is set to continue "until substantial further progress has been made toward the Committee's maximum employment and price stability goals."

December's guidance merely restates what investors and the market already knew; that the Fed will keep its interest rate on the floor for a long time and likely longer than any other central bank as things stood on Thursday, while also running the printing presses long enough for it to become confident of one day hitting its 2% inflation target.

Nonetheless, it's exactly this policy prescription which many see the Dollar rout resulting from, a rout that gathered pace when the world's currency trading capital opened with the London morning on Thursday. Nascent losses have left the Dollar Index nursing a -6.86% decline for 2020, which results from the greenback's falls against predominantly the Euro, Yen, Pound Sterling, Swiss Franc, Swedish Krona and Canadian Dollar.

"The year-over-year change in the USD is not at worrying levels for now. However, the problem is that the long-term forces at work in the USD sell-off are incredibly strong and could be persistent for some time to come. This could drag down the year-over-year change in the USD to ranges where the pass-through to inflation and/or trade become more apparent for several G-10 economies," says Bipan Rai, North American head of FX strategy at CIBC Capital Markets. "Recall that the Fed switched to ‘average inflation targeting’ (or AIT) back in September. That’s a problem for other central banks going forward."

With immediate crisis-fighting obligations aside, the Fed's 'lower-for-longer' stance and the downbeat Dollar outlook result from a multi-decade decline in trend rates of GDP growth that have left the economy unable to produce the 2% inflation average that the Fed is charged with using monetary policy to safeguard or otherwise deliver. 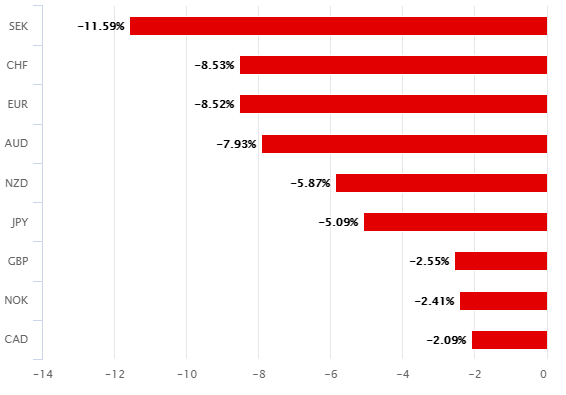 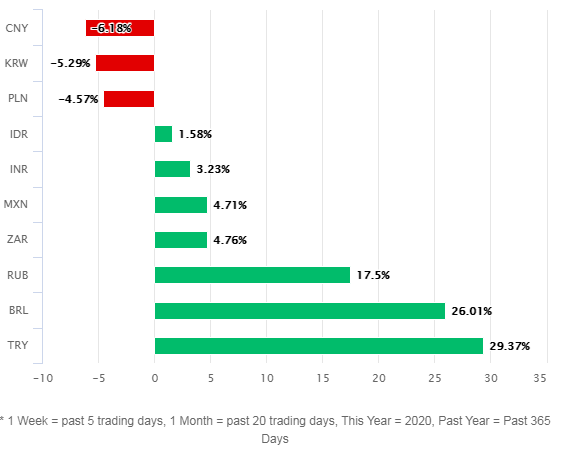 This problem isn't unique to the U.S. but much like with many things, the Americans are at the vanguard of the response to this trend and the Dollar's 2020 drubbing is a direct consequence of that. However, Dollar losses now risk making other central banks' problems larger too.

This is because central banks, certainly those in major industrialised economies, have long been an emperor without clothes in a market that is composed mainly from blindfolded noblemen, peasants and serfs. But the emperor's modesty is increasingly being revealed in all of its impotence by an ongoing precipitous decline of inflation and falling trend rates of economic growth.

Inflation weakness and economic growth could be made worse elsewhere by the Fed's great, big Dollar decline that many see continuing at least through 2021. In the zero sum currency market, declines for the Dollar reflect gains for somebody else's unit of account, which means cheaper imports, lower consumer prices and when it comes to export or trade oriented economies; impaired competitiveness which threatens the growth outlook.

"We wonder when markets will ever wake up to the realization that the Fed is becoming increasingly powerless to influence real economic growth and inflation; and that it’s merely trying to keep the stock market (ie. wealth effect) buoyant and detached from the harsh economic realities. The Fed’s recent wishy-washy communication around further monetary policy accommodation, and their push for politicians to pick up the baton with fiscal stimulus, is troubling too," says Exchange Bank of Canada's Bregar. "It suggests they really don’t know what to ACTUALLY do next." 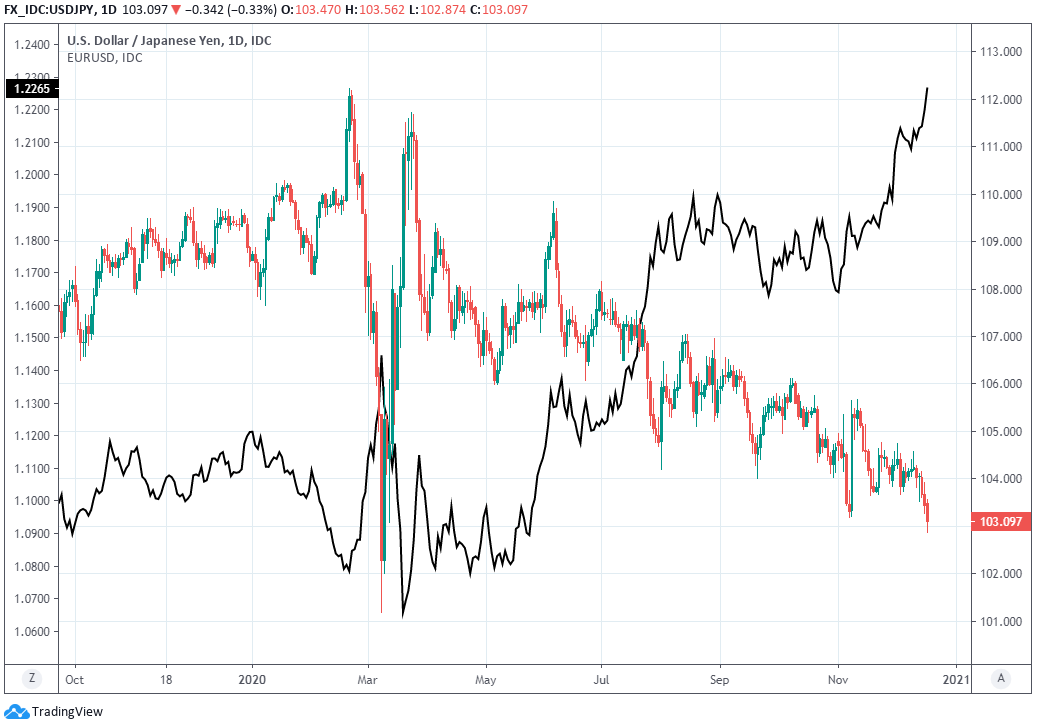 The exact cause of the growth and inflation ailments is a matter of widespread debate in economics, financial, and policymaking circles but what is now clear for all to see is the powerlessness of the emperor. This is after at least a decade in which most have toiled in vein to deliver their mandated objectives of steady inflation at or near to the 2% level, by lifting consumer price pressures.

Both the Fed and Bank of England were fortunate in presiding over economies that briefly delivered inflation in excess of their relevant two percent targets, although neither could credibly claim to have brought about that outcome. If anything, both threw it all away before even the half-time whistle sounded with arguably reckless interest rate rises, which might be the root of the Fed's June-to-September adoption of an average-inflation-targeting framework.

This new "symmetric" view of the inflation target is if nothing else simply a promise not to raise interest rates too quickly if and when the bank is fortunate enough to again catch a glimpse of a consumer price index that's risen by an annualised 2%. Rate hikes are after all the primary tool for reducing inflation - as they make new and some existing borrowings more expensive and so in the process curb economic activity - although it's not the Fed or any other central banks' ability to curb rising inflation which is in question.

"Interest rate futures markets have priced the Fed to hike later than most other central banks and nonUSD currencies have rallied as a result. Indeed, the trillion-dollar question for any central banker now is – how to push back against tightening financial conditions from an appreciation in the domestic currency? Especially if that appreciation is driven by market forces (the lower USD). It’s a very tricky question that requires some serious thought," says CIBC's Rai.