EDITOR NOTE: Is it conceivable that a market can be grinding toward new highs while simultaneously experiencing “corrections” under the surface? This conjures up the image of a construction crew adding more levels to a skyscraper whose foundations are cracking. Ultimately, gravity will have the last say, and the building will have to succumb to its brutal command. That’s how Morgan Stanley's Mike Wilson (the "lonesome bear") sees the broader stock market. So, before you read this article to evaluate his forecasts and scrutinize his fundamental rationale, ask yourself--are you prepared for a steep 20% drop in the stock market?

Back in the summer of 2018, when stocks were surging at least until the fourth quarter when the Fed made the policy error of hiking too hard and unleashing the first mini bear market since the financial crisis, and when virtually all sellside analysts were euphorically bullish, Morgan Stanley's Mike Wilson emerged as the street's lonesome bear (in addition to SocGen's permabear Albert Edwards of course), and it was then that Wilson first popularized the concept of the "rolling bear market." Speaking in May of 2018, Wilson said that "every sector has gone down at least 11 or 12 percent at least once this year. Some were down 18, 19, 20 percent. It’s fooling everybody at the index level, but there’s a lot of pain out there: Staples, homebuilders, some of these semiconductor stocks that are more cyclical are having problems."

Fast forward a little over three years, when Wilson has just reincarnated the "rolling" drop concept, only this time it has yet to grow to a fully mature "rolling bear market" and instead in his Monday Weekly Warmup note, Wilson defines what is plaguing thebroader market as a series of "rolling corrections", which like 2018 has meant that while 2021 has "produced another year of above average returns for major indices, under the surface it has been far from easy to navigate." This, to Wilson, is a classic mid-cycle transition price action (as a reminder Wilson has been pounding the table on his assertion that the market is now mid-cycle") resulting in "rotations away from higher risk with deteriorating breadth." The ultimate outcome of such rolling corrections will be a 20% "de-rating" in the broader market, i.e., an aggressive selloff.

Here is how Wilson defines his own descent into bearishness:

Over the past several months we have taken a less optimistic view of the markets than most based on our "mid cycle transition" narrative. During such periods, it's common for the market to rotate away from early cycle winners toward larger cap, higher quality stocks. This rotation away from early cycle leadership and small caps is now well established and underway (Exhibit 1). There is also a de-rating process for the broader market of approximately 20% that usually occurs (Exhibit 2).

So far, Wilson calculates, that derating process is only about 25% of the way done but he "fully expects it" to complete before year end. That means a forward P/E that is about 18x versus today's 21.3x, which using simple math means a drop of just under 700 S&P points (assuming flat fwd earnings). And while Wilson notes that "push back to that view has been strong" he reiterates that his bearish conviction "remains high based on other moves we have observed in the markets."

Going back to his trademark concept of "rolling bear markets corrections", Wilson writes that while "the S&P 500 has grinded higher and even exceeded our year end price target thanks to very positive earnings revisions, many sectors and stocks have corrected by 20%+. In fact, one could say we have experienced a rolling correction even as the index has remained in an strong uptrend."

Furthermore, and this validates our own recent observations on the technical cracks underneath the market surface, the Morgan Stanley strategist warns that financial markets "have taken on a much more defensive posture which is in-line with his midcycle transition narrative. Nowhere has this defensiveness been more visible than the Treasury market where 10 year yields have plummeted along with the yield curve."

While most have blamed extreme positioning and short covering on the back of the Fed's modest hawkishness after its June meeting, Wilson disagrees and argues that rates, and the yield curve topped in March, long before the Fed pivoted in June: "As such, we have taken a different view than the consensus citing the potential for a slow down in the second half of the year due to monetary aggregates' growth decelerating and peak rate of change on economic and earnings revisions."

There's more behind Wilson's growing bearish sentiment, and it has to do with the economy's deteriorating fundamentals.

In addition to the very difficult comps from last year's pull forward of demand for many consumer and technology goods, Morgan Stanley's chief equity strategist also thinks the consensus underappreciates the magnitude of the fiscal stimulus that was distributed in 1Q, or as he puts it, "The effect on personal disposal income, and spending, cannot be over-stated." And so, given the sharp decline in personal income since the last stimulus checks went out in March, retail sales and consumer spending more generally will likely follow soon, he argues. 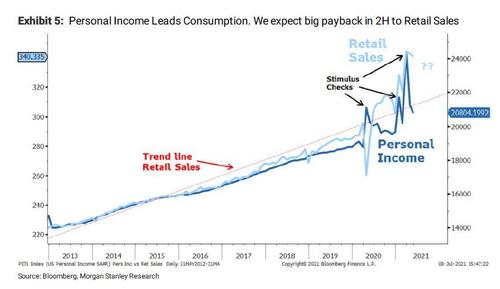 Here Wilson notes that while some have countered that the child care tax credit checks will maintain the momentum in consumer spending, he disagrees stating that it doesn't really compare: "we're talking about $18B per month versus trillions over the past year from other programs that are fading fast. For example, the expiration of the supplemental unemployment benefits in August which will essentially offset the child care tax credits. Net net, when we include all these programs, our economics team forecasts a trajectory that moves more in line with GDP from here." Based on the impossible comparisons, Wilson warns that the US economy is headed for a big deceleration in y/y growth from the 22% surge in 1Q21 that troughs at -9% y/y decline in 1Q2022. Unless, of course, a new mega-crisis "unexpectedly emerges" greenlighting the injection of several trillions more in fiscal stimulus - one wonder if said crisis will be the "delta", "lmabda" variant, or something yet undefined... 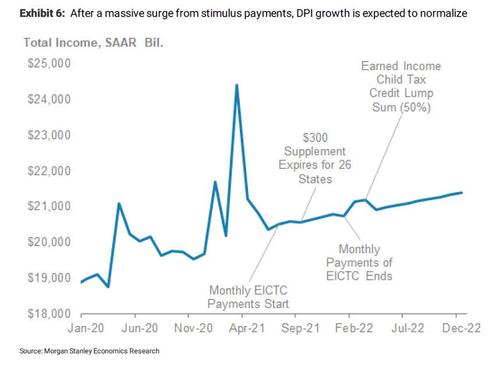 Still looking back at the recent economic performance, Wilson notes that the trillions in Q1 stimulus translated into much better than expected GDP, sales growth and operating leverage, which he notes was "part of our bullish view a year ago but now it's played out and more importantly, it has been embedded into earnings expectations." Paradoxically, earnings revision breadth has never been higher even though the underlying causes behind the growth bump are now long gone. 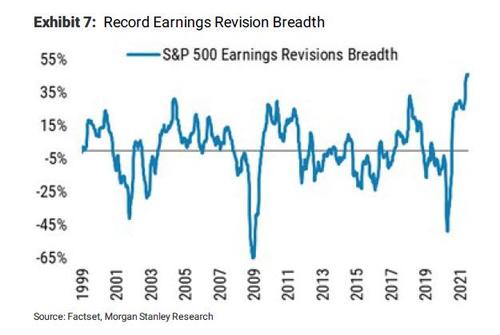 Furthermore, absolute increases to 2Q estimates for the S&P 500 since the end of 1Q have amounted to +7.5% or 2x the typical revision during a normal quarter. In some sectors, it's much more extreme. In particular, we would cite consumer durables and tech hardware as outliers where a payback in demand seems likely.

Stepping away from economic fundamentals and turning back to recent market performance, Wilson says that he believes "the recent decline in rates, commodities, and cyclical stocks geared to economic growth is indicative of a market that is getting worried about the sustainability of the pace of recovery, especially relative to expectations."

He adds that perhaps the greatest warning sign coming from the market is "the increasing deterioration in breadth as the index makes new highs every week", something we highlighted last week when we showed the collapse in new 52-week highs on the NYSE. 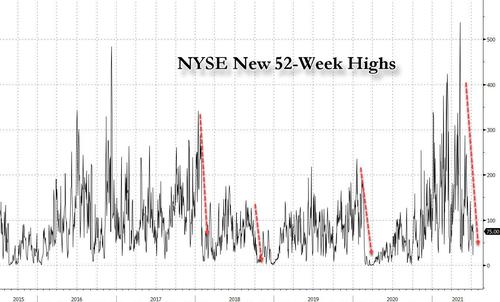 And while the decline in long end rates has appropriately benefited large cap growth stocks over the past month, with the likes of AAPL, MSFT and AMZN all hitting record highs in recent days, Wilson argues that lower rates from here will no longer prove to be beneficial to stocks "as it will signal these growth fears are coming true."

We then get to one of Wilson's favorite topics: The equity risk premium.

We have long argued that the Equity Risk Premium (ERP) is unlikely to break 275bps on the downside as long as we are in a world of financial repression (Exhibit 9). Indeed, the ERP bottomed once again at that level in April just as rates were topping. Since then, rates have backed up 50bps as ERP has risen by slightly more, thereby keeping PEs the same. From here, our view is that ERP will rise further as rates drift lower, particular as the market starts to interpret these lower rates as bad for economic growth. Furthermore, whenever real 10 year yields have been this low in the context of decelerating growth, the ERP has been materially higher (Exhibit 10).

Conversely, should rates begin to recover and move higher later this year as the growth scare comes to an end, the ERP is unlikely to offset on the downside as it will begin to price in the continued recovery and inevitable move higher in rates as the Fed tapers asset purchases and raises the front end.

Wilson's bottom - and bearish - line is that valuations are coming down further as they typically do during all mid cycle transitions; the coming correction also fits with Wilson's 1940s analog (which he first detailed back in March), in which the MS strategist showed how ERPs bottomed around the same levels about a year after WWII ended and the economy reopened. In other words, "similar to today, the market anticipated the end of the war and appropriately priced the recovery to come. PEs fell sharply once the recovery was in full bloom in 1946 and the Fed began its long move away from the zero bound"

The only difference between the 1940s and now, is that back then the US was coming out of a war; well, according to many the only thing that can keep the US economy - and stocks - growing at the current nosebleed pace, is entrance into a war, either a regional, container conflict or something much bigger: think China.