EDITOR NOTE: Here’s an alternate way to look at the stock market by monitoring operating margin forecasts. A price move is a proposition; something like an opening statement; a claim. The fundamentals are expected to support that proposition, like backing arguments to the claim. If they don’t, then the proposition falls short. If they do, then the price makes another proposition on top of the previous statement. Market sentiment is what makes the proposition, “leading” the supporting arguments. The fundamentals expected to back it consists of revenue and earnings. They’re supposed to “validate” market sentiment’s claim. When they don’t, and if a share’s price still manages to rise, you might expect a correction. But if you see this same action multiplied across an entire index, or most of it, you can expect an eventual crash. Is this what’s playing out in the stock market right now?

Want to know where the S&P 500 Index may be headed after reaching another record high? Take a look at profit margins.

Operating margin forecasts are a strong leading indicator of stock prices. A decline in such outlooks preceded routs in the S&P 500 in 2011, 2015, 2018 and 2020. What’s concerning now is that analysts have stopped raising their forecasts, and if they begin to lower them, it's likely to lead to a dip in the broader market again. And it’s not like there’s a lot of room for further improvement in margins, defined as earnings before interest and taxes divided by sales. The consensus among analysts is that they will expand to 16.7% over the next 12 months, topping the previous record of 16.4% set in 2018.

The relationship between S&P 500 profitability and inflation indicators is murky at best, but recent spikes in the producer price index and a smaller increase in the consumer price index is enough to raise a caution flag for equity margin expansion potential for the next few quarters. At its peak in April, the PPI rose 9.5% from a year earlier, almost 3 standard deviations above its average over the past 30 years. (It rose 9.4% in June.) From 2010 to 2019, the median estimate of where operating margins would be 12 months into the future for S&P 500 members were negatively correlated to changes in PPI. The current coefficient of minus 0.22 suggests gains in corporate profitability are likely to stall or even fall as producer prices continue to rise.

Analysts are getting nervous. They have cut their margin estimates for a quarter of S&P 500 members in the last three months. Their stocks were down 0.63%, compared with a gain of 2.20% for the index and a 3.30% increase for companies with rising margin forecasts. Slicing the index into quintiles based on changes in operating margin shows that companies with the largest declines had a median stock-price decline of 0.5%, versus a gain of 3.9% for those with the greatest expansion in consensus estimates.

Industries with the most negative margin pressures are likely to be those that investors historically consider “defensive,” such as health care, utilities and consumer staples. Large companies involved in pharmaceuticals, biotechnology and life sciences, household and personal products, and utilities have historically fared worst when producer prices outrun consumer prices, and these are where margin forecasts gave dropped the most over the last three months. Margins forecasts continue to rise for the more cyclically-oriented segments of the equity market, with media, consumer services, transportation and oil and gas industries having the largest gains. 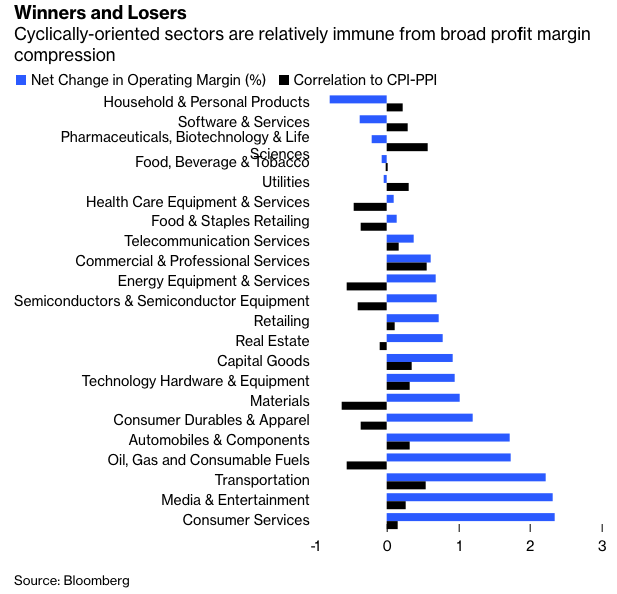 Though consensus expectations imply smooth sailing, companies are set up for a more challenging margin outlook as revenue growth rates likely fade, but inflation pressures remain relatively high given persistent uncertainty in the supply chain. Against this backdrop, currently selective industry margin weaknesses may start to spread to more industries, resulting in degradation of margin forecasts for the index at large. Given these estimates are a strong strong leading indicator of stock-price direction, margin trends may be a critical risk to the equity market in the months ahead.