What Will Happen To Gold When The Fed Starts Cutting Rates EDITOR'S NOTE: What will happen to gold once the Fed begins cutting interest rates? While promising economic news seems to be in scarcity these days, we finally get some glimmer of hope, albeit for gold investors, from Goldman Sachs. Goldman’s comments come at a time when the yellow metal appears to be bouncing back from extreme bargain levels (sorry if you missed the boat on this one). The comments themselves don’t say much of anything we don’t already know, but they do reaffirm gold’s long-standing status as a safe haven hedge against economic storms, whether it comes in the form of inflation or a deep recession.

In recent weeks, gold has been caught in a perfect vice of bullish and bearish forces.

On one hand, the Hawkish Fed has continued to pile relentless pressure on the precious metal; to wit, during his recent press conference, Chairman Powell hinted at slowing down the pace of rate hikes, while also signaling that terminal rates may peak at a higher level. Following the conference, US rates and the dollar surged. Importantly, the Fed reiterated that bringing inflation down to 2% remains a top priority, triggering a sharp fall in gold after the announcement.

But wait, isn't inflation good for the world's oldest inflation hedge? Well, as Goldman's Mikhail Sprogis writes in a note this morning, in given circumstances, it is: for example, high inflation tends to be (extremely) bullish for gold when the market questions the central bank’s ability to fight it, such as during Burns’s tenure in the 1970s. In contrast, high inflation tends to be bearish for gold when the market gives the CB credit in its ability to reduce it, such as during Volcker’s fight on inflation in the early 1980s.

In any case, the Fed’s consistent message that it is willing to sacrifice growth to bring inflation under control has helped keep breakeven inflation expectations stable and pushed real rates to the highest level since the GFC. As a result, gold ETFs and speculative positions have fallen as the effect of higher real rates has offset the impact of rising recession worries.

On the other hand, as we reported last week, Central Bank buying of gold, especially among emerging markets, just hit a record: according to the World Gold Council, in Q3 2022 CB gold purchases of 400 tonnes, the largest quarterly figure on record, and 300 tonnes above trend. 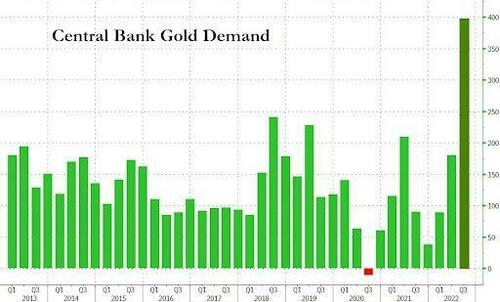 As an aside, and as we discussed last week, the record-high buying emanated from an "unexplained" component of the World Gold Council data, which reflects purchases by countries which either do not report their activity or report with a lag. For example, Russia stopped reporting gold purchases this year, while China often reports with a large lag. The largest reported purchases came form Turkey, Uzbekistan and Qatar. Still, one thing we can be reasonably sure of is that the buying is done by a combination of EM CBs. Meanwhile, DM CBs have not been significant gold buyers since the 1960s.

In any case, this furious EM central bank buying cannot be explained solely by dip-buying behavior or low interest rates. It is particularly impressive also given persistent dollar strength through Q3 that, all else equal, would have normally depressed non-USD purchases of gold. It also means that, even without any further gold purchases in Q4, 2022 is set to be a record year for CB gold demand.

This paradoxical divergence between record central bank demand, and depressed pricing due to Fed policies, creates - according to Goldman strategist Mikhail Sprogis - gold’s return asymmetry: as he writes, "EM CB demand appears to be a reflection of geopolitical trends that have been years in the making vs a one-off spike." As a result, the Goldman banker believes that structurally higher EM CB demand creates an asymmetric payoff for gold as it provides a floor to gold if further ETF liquidation occurs in response to further hawkish Fed surprises.

Meanwhile, in a scenario where a US recession leads to a turn in the US monetary cycle - which it will, it's only a matter of time before the Fed breaks something badly - Goldman estimates that gold could rally by 20-30% depending on the degree of Fed cuts.

The bank's results indicate that in order to accommodate an additional 350 tonnes of CB demand through jewelry demand destruction or scrap increases, gold has to rally by 10% (poor Goldman still thinks that the physical and paper gold markets are connected when in reality nothing could be further from the truth courtesy of rampant paper gold manipulation by central and commercial banks and the BIS). In any event, Goldman continues and notes that with CB demand rising by 233 tonnes over the past year, the gold price was boosted by 6.5%, all else equal. Going forward, if CB gold purchases were to continue at a 400 tonnes quarterly pace, that could boost equilibrium gold prices by 25%, all else equal. In a less extreme scenario where purchases moderate to 250 tonnes per quarter over the next year, we believe gold could increase by 12.5%, all else equal.

One way to think about what's going on is that EM central bank demand acts as a ‘put’ on the gold price; meanwhile elevated growth risks create a positive asymmetry for gold returns. According to Goldman, the precious metal's downside in the case of a ‘soft landing’ or further Fed hawkishness is significantly less than gold’s upside in the case of a growth shock that pushes the US economy into recession. Strong demand from central banks further enhances this asymmetry: in 3Q22, 300 tonnes of above-trend CB purchases were outweighed by 250 tonnes of below-trend ETFs demand and a 340 tonne decrease in speculative futures positions. In other words, massive physical gold buying by central banks was offset by even more massive selling of levered and derivative paper gold positions. As a result, gold prices tumbled as investor selling outweighed CB buying.

But going forward, even Goldman thinks there is limited further downside in Spec positioning which is already close to historic lows. The bank also thinks that, while the drawdown in US ETFs can continue, European liquidations should slow after the ECB turned more dovish. Thus, structurally higher CB demand should help absorb further ETF selling which further enhances the gold price return asymmetry in our view.

There is much more in the full Goldman note available to pro subs in the usual place.