EDITOR NOTE: Apparently, the mainstream investing populace has more faith in the Fed and the government than it has in the value of money itself. Investors would rather place their faith in Treasuries whose bond yields are under tremendous downward pressure versus the stability of hard currency (physical gold). Given what’s at stake--the decline in purchasing power--gold’s continued pullback represents an inversion of sound thinking, at least for the masses, many of whom are probably among those who blame the “global elite” for their woes yet can’t quite figure out how they’re getting in the way of their own financial independence. Regardless, this represents the perfect opportunity for smart money to accumulate the yellow metal. A similar historical pattern happened in the mid-1970s, when gold dipped prior to rising. Before that, we saw a similar occurrence around 1919, during the Weimar Republic years leading to hyperinflation.

The U.S. bond market is increasingly reflecting investor fears over weak long-term growth and financial repression, yet gold continues to trade at a large discount to where the bond market suggests it should. Not only does gold appear cheap relative to real bond yields, but nominal bond yields suggest gold is deeply undervalued relative to industrial metals. If the correlations seen over the past few years remain intact, then gold should move higher over the coming months even as industrial metals come under pressure.

Price action in the bond market reflects a combination of weak real GDP growth prospects and expectations of financial repression as investors realize that the government's debt burden will force the Fed to keep interest rates below inflation indefinitely to prevent a surge in borrowing costs. Amid the small spike in real yields back in February I argued that it provided an opportunity to enter long positions in the iShares TIPS Bond ETF (TIP) and since then the index has moved to new all-time highs (see 'TIP: Taking Advantage Of The Selloff'). I expect the forces driving the TIP higher to also drive gold back to all-time highs over the coming months.

The chart below shows the gold price and the performance of inflation-linked bonds over the past six years. The two assets moved in lockstep for much of this period, but gold has recently begun to lag despite a surge to new highs in Treasury Inflation-Protected Securities. As I argued most recently in 'Gold: A Huge Overreaction To The Fed Minutes', I see little reason to think this long-held correlation will break down permanently, and expect to see increased monetary demand for gold to drive a move back towards the level implied by inflation-linked bonds, which is currently north of USD2,000. 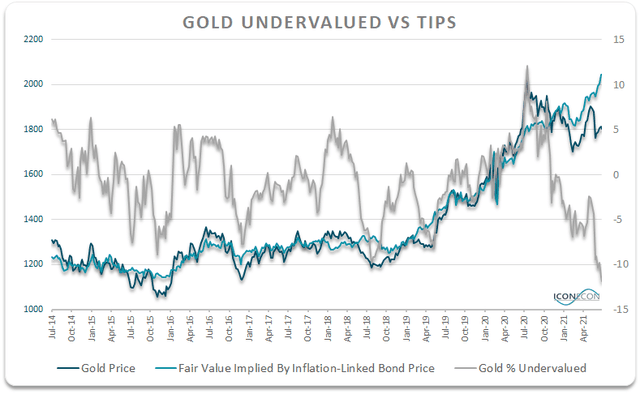 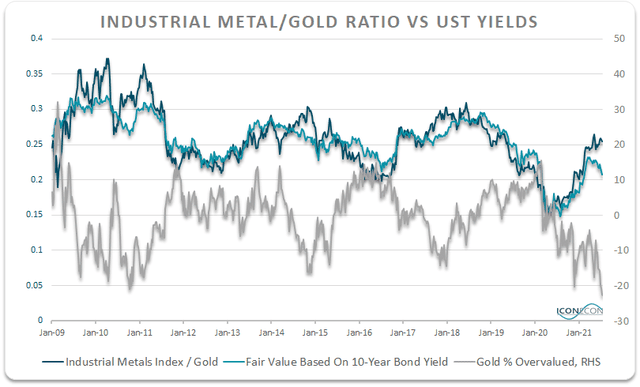 This makes intuitive sense given that industrial metals are much more sensitive to rising and falling economic growth expectations. However, since the peak at the end of March, 10-year bond yields have fallen almost 50bps while the ratio of industrial metals over gold has actually risen. Based on the correlation over the past 12 years, the gold/industrial metal ratio is more than 20% below the level implied by current bond yields.

The combination of these factors strongly suggests that gold will outperform over the coming months, and my view is that the metal will rise even as the broader commodity complex comes under pressure. The past 12 months have seen gold post its worst performance on record versus the Bloomberg Commodity Complex, declining by a staggering 37%. This underperformance exceeds even the gold bear market of the mid-1970s, which gave way to huge gold price outperformance.