When Our Wealth Is Gone, The Final Step Is Inflation

EDITOR NOTE: This article presents a blunt and scathing critique of government spending and Fed policy. It all boils down to the charge that “our wealth is being gobbled up faster than it can be created.” Corporations and the richest segment of American society--i.e. the “elite”--are practically gorging on the country's wealth by “cannibalizing” the asset values of the middle class and the poor. There will be toxic effects to this perverse form of financial autophagy, but not until severe inflation sets in, afflicting a large swathe of American society, inducing a form of financial necrosis until there’s nothing left to eat away. The only assets that can provide immunity from this perverse infection are non-CUSIP gold and silver. Hopefully, by the time severe inflation sets in, you own enough to survive it.

When I was dating my wife Jo, her 10-year-old daughter Holly learned I was a glutton for chocolate chip cookies.

This adorable little lady grinned, loaded in the chocolate chips and baked an entire batch by herself. As she put the cookies on the cooling rack, I began to devour them. They were soft, moist and yummy!

Holly yelled, “Mom he is eating them faster than I can bake them.” Not surprising, I soon gained 25 pounds.

Today Holly owns a small business. Over the holidays she complained. Much like Dennis and chocolate chips, our wealth is being gobbled up faster than it can be created. She is spot on.

The government spends recklessly, bails out banks and debt soars.

Bank borrow and lend cheap money; commercial loans have skyrocketed. Untold billions went to binge-borrowing corporations buying back their stock to hype the market price, yet their debts remain.

In 2012, it was estimated that over $4 trillion in interest that would have been paid to savers, was passed on to banks and government in the form of interest they did not have to pay.

Using back of the envelope calculations, if interest rates were 6%, instead of today’s 1%, investors would receive $1.7 trillion in additional interest annually. Every IRA, 401k and pension plan would be healthier, and retirees would be sleeping better.

“…. We want to know why the Federal Reserve, funded and heavily run by the banks, is keeping interest rates so low that we receive virtually no income for our hard-earned savings while the Fed lets the big banks borrow money for virtually no interest. It doesn’t seem fair to put the burden of your Federal Reserve’s monetary policies on the backs of those Americans who are the least positioned to demand fair play.

…. We are tired of this melodrama that exploits so many people who used to rely on interest income to pay some of their essential bills. Think about the elderly among us who need to supplement their social security checks every month.”

“Debt financed fiscal policy can provide a short-term lift to the economy that lasts one to two quarters. …. However, the benefit of these actions in 2009, 2018 and 2019,…proved to be very fleeting and the deleterious effects of the higher debt remain.

The US Debt Clock tells us our debt is over 130% of GDP and rising.

The government and banks gobble trillions in interest that would have been paid to savers, 401k and pension plans. Retirees are tapping into the principal to pay the bills.

Pension plans can no longer meet their projections. Pensioners who worked hard and played by the rules are working longer and seeing reduced benefits.

Wealth for current and future generations is being quickly siphoned.

“The 50-year long era of the few enriching themselves at the expense of the many has ended, for the same reason eras of extreme exploitation always end –

…. Central banks, ultimately financed by the Fed to the tune of $29 trillion, twice the size of America’s entire GDP, instituted The Great Reset under the usual guise of “emergency measures” which then became permanent policies.

…. You can see each advance of capital’s top tier-the top 0.1%…the top 0.1% first pulled away in the 1980s financialization, stutter-stepped in the early 1990s and then exploded higher as technology fueled capital’s leverage and exposure to the gains reaped by computers and the Internet. 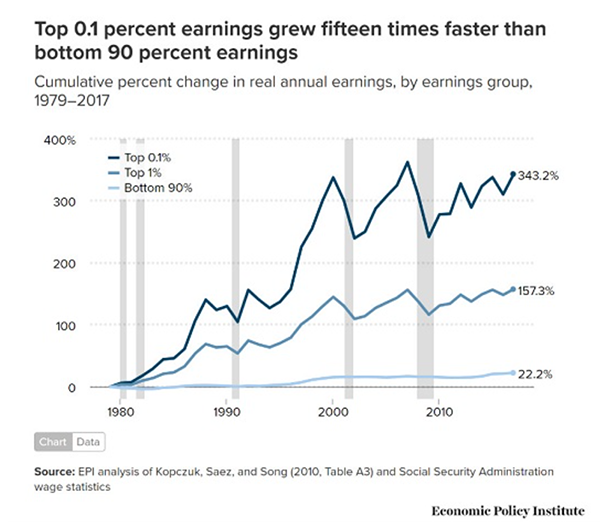 …. Alas, these extremes are not stable or sustainable, and so each wave ends in a devastating crash.

The hyper-centralized global money control has run out of rope as the cheap oil is gone, debts have ballooned to the point there is no way they’ll ever be paid down, and the only thing staving off collapse is money-printing, which holds the seeds of its own demise.

…. This sucker’s going down. The Great Reset has already run its course after 12 long years of artifice, fraud and trickery. So global elite shills, lackeys, factotums, toadies and apparatchiks-prepare for your Wil-E-Coyote moment of truth.”

Chuck Butler and I have warned that our escalating government debt will eventually cause a collapse. It’s amazing how the government has managed to spend recklessly and pile up debt for generations. What makes this warning different from the thousands we have seen from pundits for decades?

I sent Chuck the article, asking:

“Chuck, the 2008 bailout taught me something. You and I can’t pile up debt without eventually collapsing, but our government has done it for decades and accelerated it since 2008.

Worldwide interest rates are lower than ours, some are negative. Much like the joke about the “best looking chick at closing time”, our rates are ugly, but compared to others we may look attractive. What makes this any different?”

“Dennis, you ask a good question. The reason you and I can’t continue to endlessly pile up debt is eventually lenders cut off our credit and demand payment. Then we change our behavior, and/or file bankruptcy, screwing the lender.

As long as someone is fool enough to continue lending us (or governments) money the game can continue.

A major change has occurred. While 10-year treasury interest rates are higher than most of the world, all our bonds are not selling at auction; the government is not willing to let the interest rates rise to a free market rate. They sell what they can to primarily dealers, then the Fed buys the remainder.

When investors buy bonds with hard earned money; real wealth is being invested. The Fed creates money out of thin air and buys government debt along with a lot of corporate debt, mortgages – you name it. That money has not been earned by anyone through hard work and ingenuity, it is fake money created by a computer.

Creditors like Russia and China have reduced their holding of US debt by billions of dollars. Like smart bankers, they don’t want to get left holding the bag. Default ends with bondholders getting paid pennies on the dollar, or through inflation where the dollars are devalued to the point of being almost worthless. Remember, Roosevelt devalued the dollar so it is not without precedent.

Inflation is bad; hyperinflation is when NO ONE wants to hold your currency. It gets ugly and normally brings down a government. I’ve read where both Russia and China are encouraging others NOT to hold US debt – just saying….

Up until 2008, others bought our debt. Dennis, our government is now monetizing the debt while siphoning as much wealth as possible from citizens through taxation. The final step is inflation, which generally destroys much of the remaining wealth of the nation.

Of course, the .01% moves much of their wealth out of the country, into foreign currency and assets that generally protect against inflation.

The new administration ran on a platform of higher taxes, and are “Going Big” when it comes to deficit spending. I have never felt stronger about my recommendation to diversify, and own gold and precious metals. It looks to me like “someday” is getting much closer.”

As always, Chuck gets to the point.

This time really is different

Michael Maharrey reports, “Janet Yellen Talking Out of Both Sides of Her Mouth”:

“She acknowledged that too much debt is problematic, but in the same sentence, insisted we need to “act big” to rescue the economy.

The truth is, Yellen doesn’t care about the debt, and she, nor the newly installed Biden administration, will ever do anything to address it.

…. We’re starting to see signs of inflation in the commodities markets.

…. And at some point, you’re going to see the impact in the supermarket. In fact, my wife insists we already are.

Typically, the Fed fights inflation by tightening monetary policy and letting interest rates rise. But how can it do this with Yellen and Biden depending on low rates to finance their massive spending spree?

The answer is obvious. It can’t.”

We rounded the final turn when the Fed began monetizing the debt. The cookie jar is almost empty; the world is on to the game.

Got Gold?? Sure hope so!

Originally posted on Miller on the Money

Microsoft And LA Schools To Track Kids By QR Codes?

Is The U.S. Falling Into A Stimulus Trap?

How Portfolios Are Different Between Gold and Cryptos

How Does The Increasing Measure of Inflation Affect You?

The False Hope of Monetary Monotheism

The Damaging Potential Of The Modern Monetary Theory