EDITOR'S NOTE: There’s this well-known idea that some criminals have a tendency to return to the scene of the crime. Why? Perhaps some are trying to undo the past while others see it as an irresistible game. We’re not trying to make allegations here but there’s something ironic in the fact that JP Morgan is one of two megabanks hoarding 90% of the gold and precious metals derivatives held by all banks. Not only is the size of its position unusually massive, but this 1,071% increase happened within one quarter and is worth over $330 billion. Remember that in 2020 the US DOJ charged the bank with rigging the precious metals markets—a criminal felony to which JPM admitted its nefarious activities. JPM also admitted that it rigged markets for eight years prior to getting caught. As a side note, Goldman Sachs recently raised its year-end price target to $2,500 an ounce. With gold hovering around the $1,800/oz level, how much do you think JPM is set to gain if that target is reached with a $330 billion position? 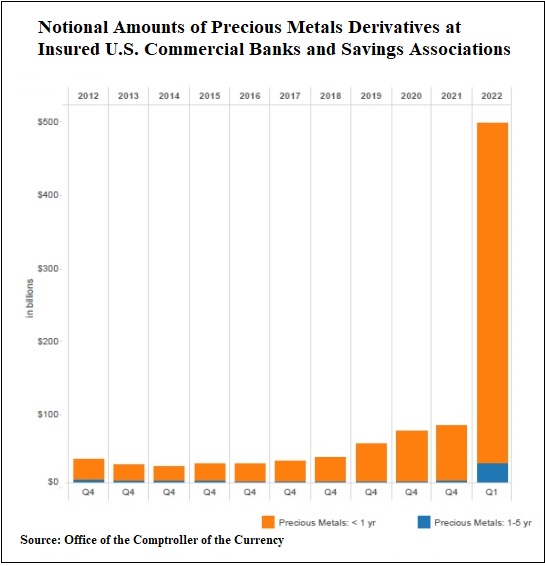 Last Tuesday, the Office of the Comptroller of the Currency (OCC) released its quarterly report on derivatives held at the megabanks on Wall Street. As we browsed through the standard graphs that are included in the quarterly report, one graph jumped out at us. It showed a measured growth in precious metals derivatives at insured U.S. commercial banks and savings associations over the past two decades and then an explosion in growth between the last quarter of 2021 and the end of the first quarter of this year.

In just one quarter, precious metals derivatives had soared from $79.28 billion to $491.87 billion. That’s a 520 percent increase in a span of three months. (See Figure 18 at this link. The last ten years of the graph is shown above.)

Having studied these quarterly reports since the 2008 financial crash, we knew where to head next. We went to the graphs in the OCC report showing the breakdown of different categories of derivatives at specific banks. Table 21 showed that precious metals contracts at JPMorgan Chase had spiked to $330.123  billion as of March 31, 2022. The same table showed that Citigroup’s insured commercial bank, Citibank, held $114.148 billion in precious metals derivatives.

According to the Federal Deposit Insurance Corporation, as of March 31, 2022, there were 4,796 federally insured banks and savings associations in the U.S. Combine that figure with the latest report from the OCC and it means that just two banks, JPMorgan Chase and Citibank, control 90 percent of the precious metals derivatives of all 4,796 insured financial institutions in the U.S.

We checked the previous OCC report for the quarter ending December 31, 2021. It showed that at year-end 2021, JPMorgan Chase had reported only $28.182 billion in precious metals derivatives versus $330.123 billion three months later – a staggering increase of 1,071 percent.

There was a footnote that attempted to explain the bizarre picture of what was going on in the gold market. It read as follows:

The footnote raised more questions than it answered. According to legal definitions available at Cornell Law School (not to mention common sense), an “exchange rate derivative contract” is “a cross-currency interest rate swap, forward foreign-exchange contract, currency option purchased, or any other instrument linked to exchange rates that gives rise to similar counterparty credit risks.”

Why would a gold derivatives contract have ever been classified as an exchange rate contract? Gold contracts are to foreign exchange contracts what zebras are to a centipede.

There is the decided perception that Wall Street megabanks have been hiding from the public the true extent of their involvement in the gold market through some ginned-up derivative definition. 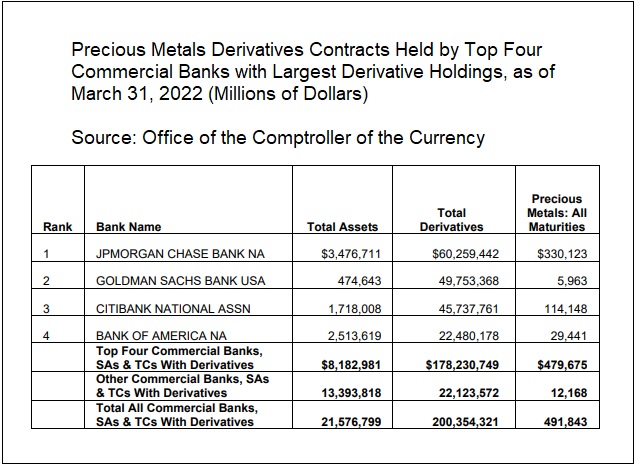 JPMorgan Chase is the last bank in the U.S. that should have a $330 billion involvement in precious metals. On September 29, 2020, the U.S. Department of Justice charged JPMorgan Chase with rigging the precious metals market and charged it with a criminal felony count, to which it admitted. According to the Justice Department, the rigging occurred for more than eight years, from March of 2008 to August of 2016, and involved “tens of thousands” of incidents. The Justice Department wrote that traders at JPMorgan Chase:

The trading conduct in precious metals was so bad at JPMorgan Chase that the Justice Department took the unprecedented step of charging some of the precious metals traders involved under the Racketeer Influenced and Corrupt Organizations Act (RICO), a statute typically reserved for organized crime figures. In this case, it was used to charge employees of the largest federally insured bank in the United States.

Despite this criminal conduct, federal regulators apparently have no problem with JPMorgan Chase continuing to hold an outsized share of a market it rigged.

The ongoing hearings of the January 6 House Select Committee are peeling back the layers of corruption in the highest office in the U.S. during the Trump administration. It’s time for another House Select Committee to conduct an equally broad investigation of Wall Street’s megabanks, before they crash the U.S. economy in a replay of 2008. Clearly, Wall Street’s federal regulators have failed in their jobs just as miserably as the White House Counsel and White House Chief of Staff failed in their jobs in the Trump administration.