EDITOR NOTE: The article you’re about to read shows that the author clearly doesn’t understand the market mechanics behind what actually happened in January--that bullion banks were actually in short supply of the metals that were needed to back ETF purchases (we’ve reported on this matter several times since the silver squeeze took place). As misguided as the Reddit swarm may have been--as many joined in the trade either without full understanding or full conviction--they were close to pulling off a major squeeze. The author below is right in stating that industrial demand, particularly in the emerging renewable energy sector, will likely buoy any decline in investor sentiment. But what he’s underestimating is the potential depth and impact of the coming inflationary environment--one that will likely not see a plunge in safe-haven purchases, but rather a significant jump in silver prices.

Silver prices surged to an eight-year high in January, after retail investors piled into exchange traded funds holding the precious metal. But their mistaken reasons for doing so — and subsequent losses — have led to renewed debate about silver’s role in investors’ portfolios.

Around $1bn flowed into silver-backed ETFs on a single day in January, after comments on the Reddit online forum, called WallStreetBets, erroneously suggested that US investment banks were suppressing the price of the metal. This encouraged a group of investors to try to oppose the banks by buying silver ETFs, to push up the metal’s price. Reddit users were exhorted to buy into the funds to create losses for investment banks such JPMorgan, as “payback for the bailouts and manipulation”.

In that same month, the Reddit forum had urged investors to buy shares in retailer GameStop for a similar reason: to force losses on hedge funds that were betting on a fall in the share price.

Experienced market participants were horrified by the statements about silver, which triggered frenzied buying of the iShares Silver Trust, requiring it to increase the number of shares in issue by 37.05m, or 6.1 per cent, on January 29. This was the biggest one-day increase since the ETF started trading in April 2006.

Shares in the ETF are 100 per cent backed by physical silver held in secure vaults, so it has to purchase more of the metal whenever it receives new investments. Prices for silver coins, bars and mining company shares also rose. 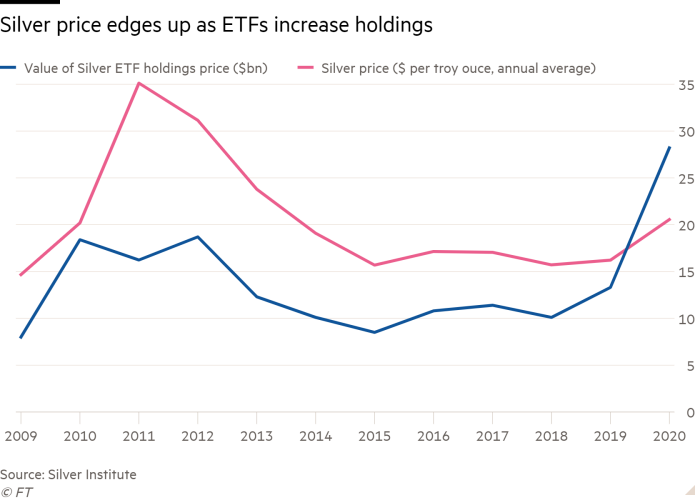 However, Ross Norman, a veteran precious metals trader, warned at the time that Reddit users were on “a fool’s errand”. He was proved right when the buying abated and the silver price dropped from just above $30 an ounce at the end of January to $26.33 within a week. Norman estimated that retail investors lost $250m during the correction.

It marked another chapter in the chequered history of the “devil’s metal” — so named for its price volatility and capacity to create painful losses. But might it be repeated?

Chris Mellor, head of ETF equity and commodity product management in Europe at Invesco, says a repeat of the “Redditor” spike is unlikely. Instead, he sees the overall rise in silver prices from the middle of last year as evidence of genuine investor appetite for an asset that was out of favour for much of the past decade.

“Investors have been buying silver for similar reasons as gold,” argues Mellor. “Silver provides a potential safe-haven asset in the depths of a crisis, a portfolio diversifying asset, and as protection against the risk of renewed inflation.”

This rising investor demand pushed ETFs’ silver holdings up by a record 10,229 tonnes last year — more than double the previous record increase, which came in 2009 after the global financial crisis. It also pushed total silver holdings in ETFs beyond 1bn ounces for the first time, reaching 1.07bn ounces (33,182 tonnes) by the end of December 2020, according to the Silver Institute, a trade association.

Inflows are expected to slow to 4,666 tonnes in 2021, but that is still a big increase by historic standards. Slowing investor demand will be offset by increased industrial usage, say analysts.

“Silver’s growing use in electronics and in photovoltaics (solar panels) should buttress demand as the energy transition and electrification of our energy systems gathers pace,” reckons Nitesh Shah, research director at WisdomTree, the New York-listed asset manager.

US president Joe Biden’s plan to spend $2.3tn on US infrastructure will also bolster industrial demand for silver, according to Suki Cooper, precious metals analyst at Standard Chartered bank in New York. 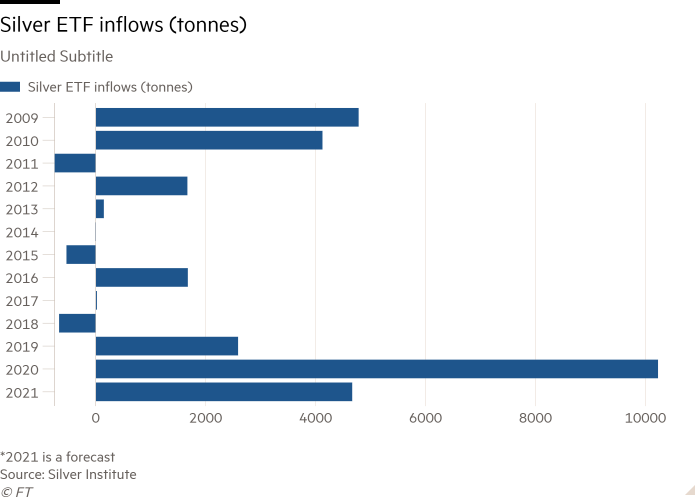 “Silver is poised to benefit from its use in solar panels, electric vehicles and charging points,” explains Cooper.

Nevertheless, Standard Chartered is forecasting that the price of silver will ease from an average $30 an ounce in the final quarter of this year to an average $25 an ounce in 2022, due to weaker investment demand and increased supply.

James Steel, HSBC’s chief precious metals analyst, also cautions that improvements in industrial demand for silver will be offset by a “very strong rebound” in mine output in 2021, following widespread production disruptions due to the pandemic. He adds that silver jewellery demand has been hit by the coronavirus too, particularly in the key Indian market.

HSBC is therefore forecasting that the price of silver will be down to about $24.90 an ounce by the end this year — it was $25.92 at the end of April — due in part to lower investor demand. The recent rally means silver “no longer looks like a bargain” compared with gold, warns Steel.

Still, he believes investor demand will not disappear, given worries about ultra-low interest rates, expanding central bank balance sheets, increases in fiscal spending and rising debt levels. “These factors will not necessarily drive the silver price higher, but they will raise support levels and cushion any corrections,” concludes Steel.