Why Global Economies Are So Weak And Where They Are Headed EDITOR'S NOTE: Turn on the local news every morning and you’ll almost always see a segment on the economy. Most pundits spin the current economic circumstances with a hint of optimism; a talking point appended to convey a psychological message at the expense of truth (which is, of course, uncertain). The pundits often admit that, yes, inflation is quite bad, BUT, the underlying economy is strong. Great! Now we can feel good as we see our incomes erode and the cost of our grocery bills get higher and higher. Well, the article below treats us with a little more respect, as in, it doesn’t aim to condescend by delivering sober news with a gentle touch. Global GDP has been rising. But it’s a mirage. Because its rise is fueled by debt and government spending rather than real production. Maybe you’re familiar with this concept. But if it’s spot on (and we’re of the bias that it is), it simply means that global economies are extremely vulnerable and weak. Perhaps this may sound outlandish. But it won’t once you take a few minutes to digest reality in the 1,000 or so words that follow.

In March 2019, we published an ominous special report, entitled: Why the global growth model is broken. In it, we explained a troubling phenomenon: productivity growth in the world economy had stalled in 2011 and started to decline.

We first noticed this in September 2017, and the situation has remained the same ever since. We named the period as the “Great Stagnation.” 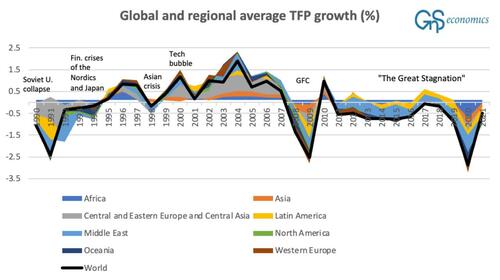 A figure presenting the growth of total factor productivity (TFP) in the regions of the world from 1990 to 2021. (Source: ZeroHedge via GnS Economics, Conference Board)

The total factor productivity, or TFP, presented in the figure above measures the share of GDP growth that cannot be accounted for by capital investment (in equipment and machinery) and the quantity and the improved quality of the labor force (skills and training). Effectively, TFP is the “unexplained” element of economic growth.

Solow Model of Economic Growth (1956) first suggested that one can find the value of TFP by collecting data from observed factors for capital, labor, and economic growth, and then, by applying some basic statistical estimation techniques to the growth model, calculate TFP, or “Solow Residual” as the remainder. It was also discovered that a large part of GDP growth was explained by technological innovations rather than purely by capital and labor, which the “residual” or TFP represented (see, e.g., our blog for more info).

In the December 2020 forecasting report, we postulated the perplexing problem of stagnated productivity growth as: “Stagnating global productivity growth is extremely worrying, because it implies that if firms are unable to increase their productivity, they will be unprofitable as well. And when their indebtedness grows yet profitability stagnates or falls, their ability to service debt will also diminish over time.”

And we continued: “Decreasing productivity growth thus implies that the ability to increase profitability and service debt has diminished for several years—at the same we have become ever more indebted! Global debt is expected to reach an astonishing $277 trillion U.S. dollars, or around 350 percent of global GDP by the end of the year.”

How did we end up here?

It turns out—or we consider it the most plausible explanation—that the continuous monetary and fiscal stimulus by central banks and governments has destroyed or seriously damaged two main forces behind economic growth: creative destruction and the risk-and-reward relationship.

Long-term economic growth is driven by technical innovations, which increase productivity. What this means is that innovations, from the spinning-jenny (practically a first actual industrial machine) to industrial robots (and beyond), grow the productivity of a human worker. This also increases his or her wage and makes products cheaper. This process, i.e., the growth of productivity, is behind the spectacular rise in living standards since the 18th century.

However, this process assumes a crucial element dubbed as creative destruction due to its dual nature. It implies, simply, that more efficient (more productive) methods will replace the old and inefficient. This requires that old firms fail (go bankrupt) and new firms take their place. This process is at the heart of the capitalist market economy.

Both gains and failures in the private sector drive economic progress. The former accumulates income and capital, while the latter uncovers sustainable businesses, setting the stage for creative destruction. Government plays an important role by setting laws, governing human and property rights, and guaranteeing income through social security, but it is, ultimately, the private sector and markets that drive progress. Do not let the MMT (Modern Monetary Theory) crowd tell you otherwise! As socialist market economy experiments have recurrently shown throughout history, this risk-and-reward relationship is essential for this creative destruction to work and for the economy to grow, dynamically.

The reason that our economies have grown, relatively decently, after the Panic of 2008, is presented in the figure below. 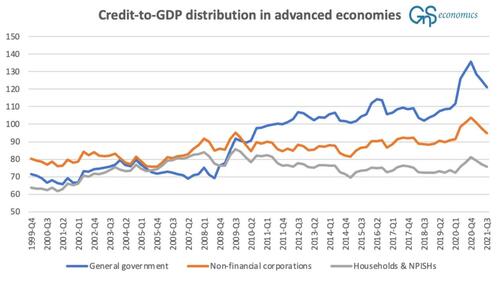 A figure presenting the ratios of debt to gross domestic product between main sectors of the economy in advanced countries from 1990 Q4 to 2021 Q3. (Source: ZeroHedge via GnS Economics, BIS)

It shows especially that government debt has grown quite a bit faster than GDP since 2008 in advanced (rich) economies. Without the massive growth of government debt, the world economy would not have grown at this speed. We have been in constant resuscitation since 2008!

This has also made our economies fragile. Currently, they tend to succumb without constant support or at least when there are efforts to withdraw it. I have explained in my previous column why central banks have been forced to bail out the global economy and markets several times during the past five years. Now, with the aggressive rate hikes and balance sheet run-off (QT) of the Federal Reserve, we are fast approaching another breaking point, which is likely to require a full-scale bailout of the world economy.

The European Central Bank is way ahead of the Fed. They are already planning an anti-fragmentation tool for the eurozone. In it, they plan to support the sovereign debt markets of the weakest members of the eurozone. Socialization of Europe is proceeding fast.

There are also rumors of an another, considerably large “bailout” fund of the EU in the making. Just two years ago, EU members agreed on a 750 billion euro Recovery Fund.

Back in 2020, Dr. Peter Nyberg, a retired director general of the Financial Markets Department at the Finnish Ministry of Finance, and I warned about the Stealth Federalization of the EU. The sovereignty of EU member states had been eroding slowly, but with the Recovery Fund, it took a massive leap forward. Another such a common-debt-scheme would effectively seal our fate.

Alas, we have lived in a “mirage” of an economic recovery since the Great Financial Crisis. Our leaders on both sides of the Atlantic have not allowed the normal economic process, especially bankruptcies and failures, to clean our economies from unproductive, “parasitic” activities, over-indebtedness, and (zombified) companies.

This is why our economies are so weak, and this is why we are heading either to a complete socialization of the world economy or an epic economic collapse. We, the people, have let our political leaders to “sleepwalk” us into this cataclysmic watershed. Now would be an excellent time to wake up.