Why You Should Buy Gold During Times of Weakness Response to a reader’s comment: There was a social media response to one of our curated articles yesterday that equated gold IRAs with “snake oil.” There used to be a time when commenters would supplement such a contentious remark with something called an “argument,” even if it meant just one or two supporting sentences. Aside from it being a gesture of interlocutory etiquette, it’s a mark of intelligence. Apparently, some people feel pride in demonstrating their lack of it; as if showcasing inert thinking paired with a social media profile would somehow yield a favorable return. But it’s okay. Free speech is encouraged. On a more serious note, if an IRA can be considered a form of wealth “reserve,” and if central banks across the globe hold “reserves” partly in gold, then are they holding “snake oil”, or is the commenter simply confusing money with its substitute (fiat cash)? If so, perhaps the reader is being a “good citizen”...in the eyes of the Federal Reserve.

The article below advances a few propositions to buy into gold weakness in the current economic environment. Three of them are well-known and historically based. The last proposition, however, addresses a potential disruption to the global monetary order that many investors somehow fail to recognize (despite it happening under everyone’s noses). This last element potentially brings forth a major turning point in the global balance of monetary power. So, if you’re concerned about the future of the dollar in relation to your future wealth, then read the article below and decide for yourself.

Gold is money, and the precious yellow metal has a long history as a means of exchange dating back thousands of years. Long before there were dollars, euros, yen, pounds, yuan, rubles and all currencies floating around in the global financial system, gold was the hard asset that held value and symbolized wealth.

Governments, central banks, monetary authorities, and supranational financial institutions hold gold as an integral part of their foreign exchange reserves. Moreover, they have been adding to reserves over the past decades, validating gold’s role in the global financial system. The last significant gold sale came in 1999-2001, when the United Kingdom parted with half its reserves at below $300 an ounce. Over the past two decades, the price path made the sale look foolish, as gold is not the barbarous relic of the past the British believed.

Aside from its monetary role, gold is a commodity and an ornamental metal that symbolizes love, wealth, and security. Unparalleled, gold’s brand remains the ultimate form of money.

Gold’s bull market began at the turn of this century as the British sold their last ounce. And it continues in May 2022. Gold supply and demand fundamentals support the price as it is a rare metal. Even though each ounce ever mined in history remains in the above-ground stocks, and the world adds more each year, the value has appreciated. Gold’s appreciation could be more about fiat currency depreciation than the metal. Over the past two decades, the precious metal has respected technical levels. 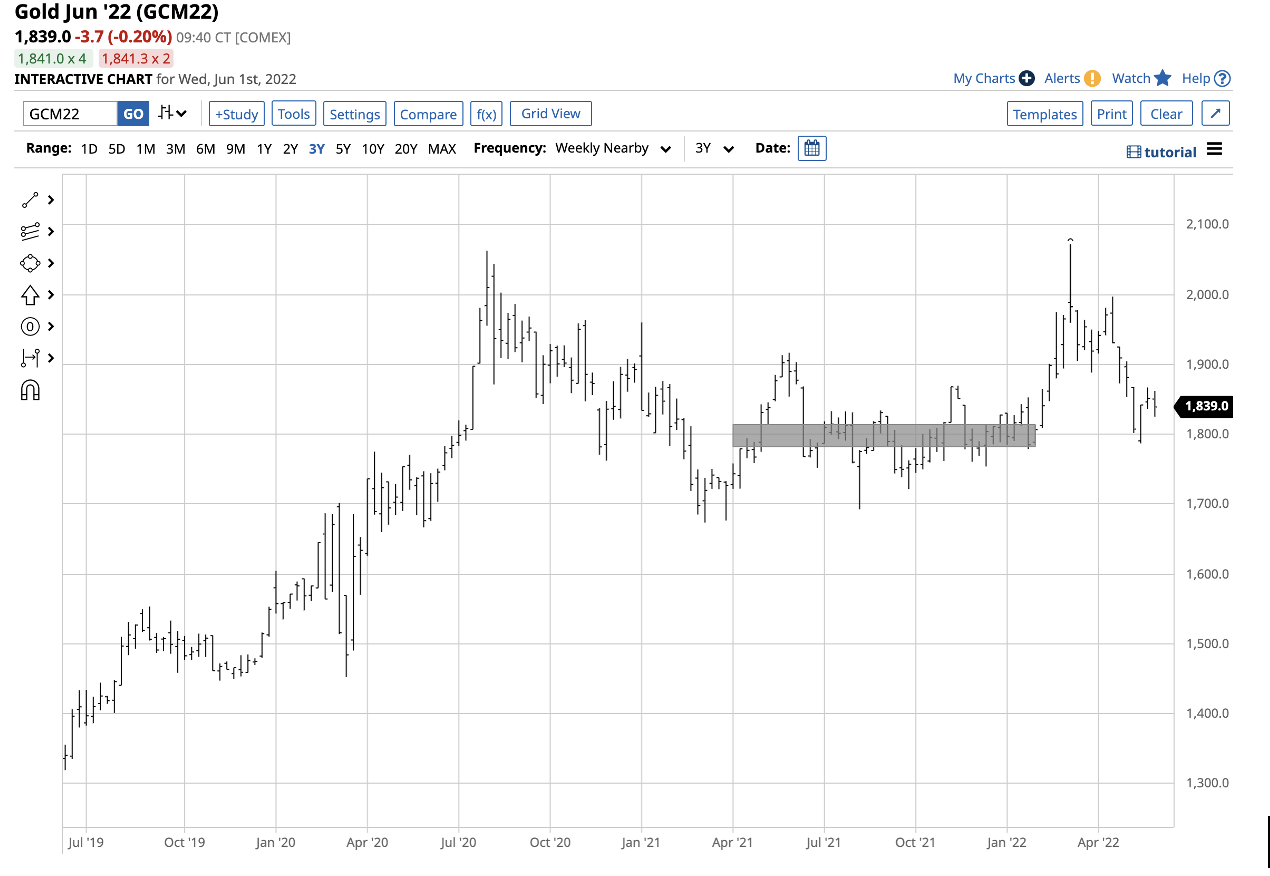 The chart highlights that $1,800 became a pivot point for the gold futures market from April 2021 through early 2022.

When Russia invaded Ukraine in late February 2022, gold took off, rising to a new record peak of $2,072 per ounce. The precious metal experienced another correction that took the price to a low of $1,787 in mid-May 2022. Meanwhile, gold made another higher low, keeping the medium-term bullish trend intact.

The gold bull is nothing new. Gold has been appreciating since the end of the last century. 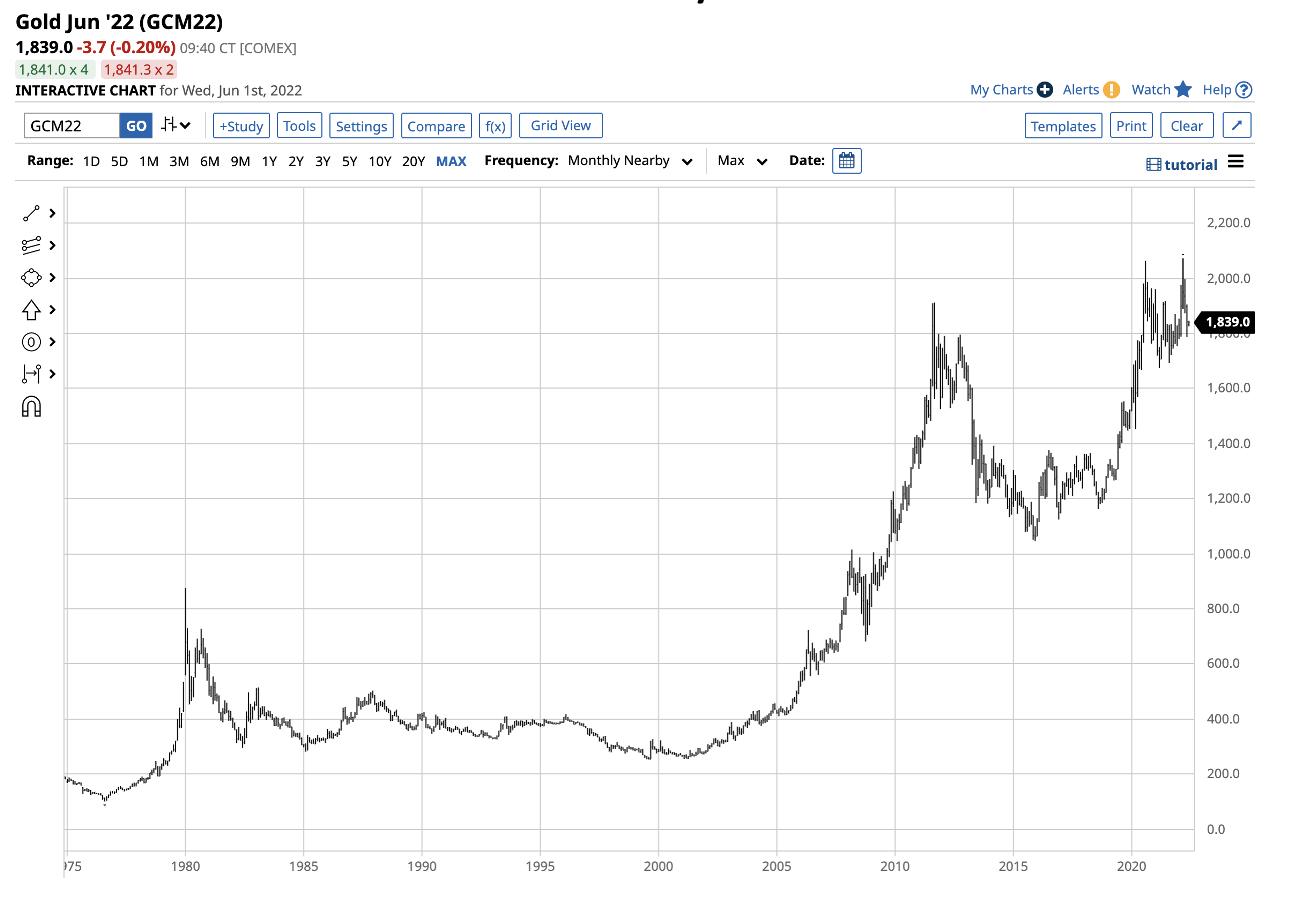 The chart shows the rise in gold’s price to the $875 level in 1980 and nearly two decades of lower highs and lower lows that ended in 1999 at $252.50 per ounce. Since then, gold took off on the upside, making higher lows and higher highs. In June 2022, the bullish trend is nearly 23 years old, with no signs of ending any time soon.

Gold is an integral part of many investors’ savings. Gold is an asset that provides safety and is a store of value with thousands of years of performance history. Perhaps the most compelling reason to own gold is that governments hold the metal as part of their foreign currency reserves. Over the past years, central banks have added to reserves.

The United Kingdom’s sale at the turn of the century was an outlier, as other governments did not follow its lead. Ironically, London is the hub of the worldwide gold market. Meanwhile, governments and individuals that purchased gold steadily on price weakness over the past decades have increased the value of their holdings through accumulation and higher prices. At $1,840 per ounce, gold may be $232 below the March 2022 all-time high, but the price is more than seven times the level of the 1999 low.

4 Reasons To Buy This Dip

At least four compelling factors make gold a critical asset for all portfolios:

Gold has respected its technical support level at the March 2021 low. The pattern of higher lows and higher highs remains intact. Moreover, the geopolitical bifurcation could lift the precious metal’s role in the global financial system. Gold remains a metal that should be part of all portfolios. Buying on price weakness has been the optimal approach, which is likely to continue.