Will Federal Borrowing And Printing Continue?

EDITOR NOTE: What you’re about to read is a technical exposition of a simple theme. It’s a critical lesson on money printing, excessive government spending and federal borrowing--themes we all know so well. There are two things that really pop out in this piece. First, is the idea of negative “real” yields, versus near-zero “nominal” yields. Remember that topic? Well, a negative yield can’t exist in a free market. It’s impossible. Yet we saw just that; a testament to the artificiality of our monetary system. The second is that the value of fiat currencies is predicated on “trust.” Lose trust, and the currency loses a significant portion of its power. We’ve lost that trust among international investors. That’s why many countries are de-dollarazing; passing up the greenback for better investment elsewhere. Might this spell the end of the dollar’s reserve status. It just might eventually. The question is, how soon will it happen? And what will happen to your wealth as an American when it finally does?

Upon his arrival in the New World, Hernán Cortés famously made history by burning his ships. The message to his sailors was clear: there can be no turning back. When the pandemic initially struck, public health officials prescribed “lockdowns.” These draconian measures were understood at the time to last 30, maybe 60 days at most. The goal was to “bend the curve” and then quickly return to “normal.” The nation – indeed much of the world – would experience a scaled up version of a Cape Cod style seasonal shutdown. The Federal government and its alter ego, the Fed, air dropped dollars by the trillions. Bridge financing, as it were. The 30-day “jaunt” through the woods morphed into a 300+ day Atlantic “crossing.” An ocean of changes – social, technological, monetary – have passed underneath and the challenge now is to understand just how different the New World will be from the Old.

Properly understood, a recession is not so much a shortfall in demand/production as it is a transformation of demand/production. The more the Old World economy transforms, the more that labor and capital have to be repurposed. Without yet knowing the extent of these changes, it is premature to handicap when and from what level the economy will organically re-start its growth trajectory. And, yet, here we stand with financial markets – seemingly oblivious to the carnage – pricing in outcomes that seem not just buoyant but, dare we say it?, irrationally exuberant.

So far, this has been perhaps that most quixotic of recessions: one in which income, asset prices, and liquidity have all expanded: 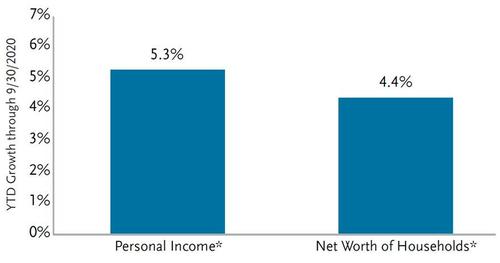 Households Are Flush With Cash* 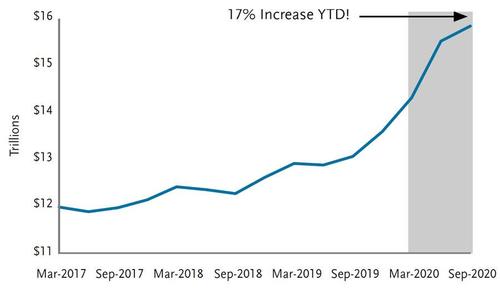 Of course, there is no real “mystery” here. Where the private economy fell short in terms of productive income generation, the “deficit” was more than made up by trillions in Federal borrowing and central bank money printing. Central bank assets as a percent of GDP have soared while Treasury real yields have gone negative, all the way out to the 30-year maturity:

Fed Assets as % of GDP 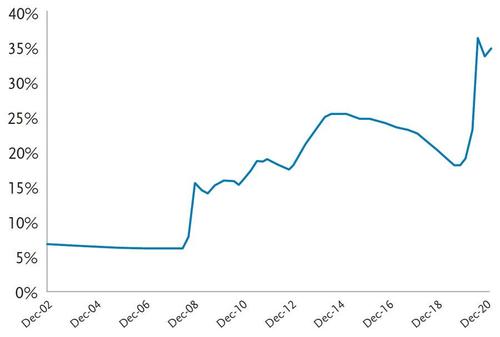 30-Year Real Rates Are in Negative Territory for the First Time! 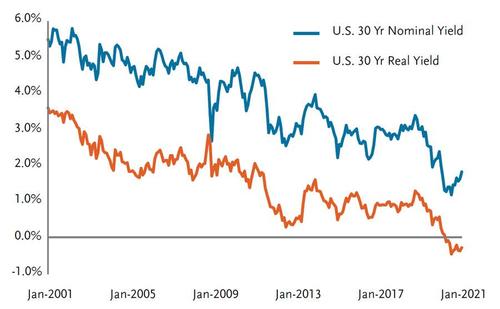 While it is a bit tiresome even to us to point this out, negative real yields cannot be a result of a free market. Rational investors lend to receive some premium over inflation. Inevitably, interest rates that have been held down against their will also subdue equity discount and real estate cap rates.

Meanwhile, credit prices, which reeled under the weight of their own excess leverage slamming into pandemic lockdowns, have subsequently “V-bottomed” in price. As for de-leveraging…not so much! 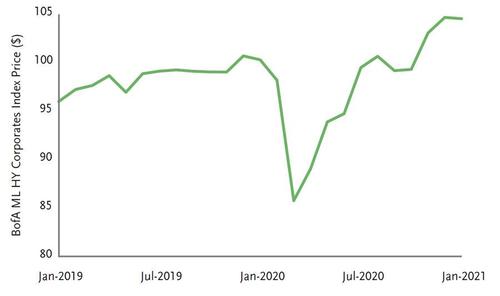 Investment Grade Corporate Leverage Is at All Time High Levels 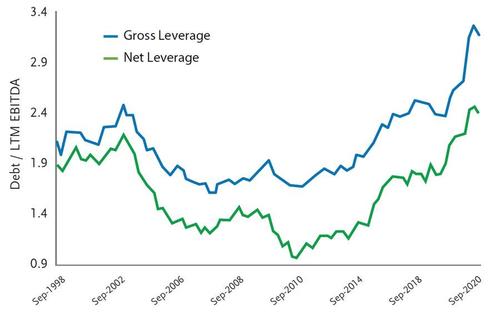 Note: Medians based on the U.S. HG universe (ex. Fins and Utilities). Universe is rebalanced each quarter.

And, all the while, we are marooned on the shores of a new land presenting us with novel dangers and opportunities. For instance, much of the professional white-collar work force is now boldly going where such industries as management consulting had gone before. A recent study by Cushman & Wakefield estimated that as much as 37% of the U.S. workforce might have the potential for shifting to a remote work environment. And, of course, even if the future of white-collar work is some hybrid model (3 days in, 2 days out?), the ramifications will be transformational. Business travel might take many, many years to return to 2019 levels with impacts spreading out across the airline and aircraft manufacturing industries, hotels, and restaurants. The differential impact on the fortunes of large urban metropolises versus those of the suburbs may be profound.

The valuation proposition for much of the office commercial real -estate market may undergo a sea change. Certain large urban metropolises – Manhattan and San Francisco among them – that had been crammed with economic activity over the cycle that is past have been “emptied” as finance and tech workers dispersed to the burbs. The same study we referenced earlier reports that already two years’ worth of net space absorption was undone in the last three quarters of 2020. Might it turn out that most of the net add in office space over the entire past cycle turn out to be redundant? And, what of the future of shopping? Now that millions have been forcibly dragged all the way to the “Paree” of e-commerce – even for such essentials as groceries – do they all go back to their “Midwestern” farm?

While human ingenuity has always navigated us through periods of change, this reality remains: there will be many losers before there are many winners. Those “losses” will destroy certain assets and take down the debt that was pledged against it. While this process is as natural as it is unwelcome, it is also being forestalled. Market forces (reality) are at war with policy. The Fed more or less “magooed” us into Modern Monetary Theory (MMT) by its crisis response. Yep, that kept the ship afloat alright, but is there ever a good time to let nature take its course? Can the Fed step aside and let the wholesale transformations that are going to happen anyway to well, just happen?

For the moment, the answer is easy: the Fed has no reason to step aside, as the perceived cost of artificially supporting an economy unable to pull its own weight is perceived as negligible. Money printing hasn’t caused any obvious problems, at least so far. But wasn’t it Herb Stein who said that if something is unsustainable, it will end? Fiat currencies thrive for the reason that all monies have thrived: because of trust. They are trusted to be reliable stores of value and unquestioned as to their role in payment for goods and services. But the Catch-22 of any fiat currency – the dollar included – is that you can print until the cows come home so long as your counterparties go on trusting. Lose the trust, and the Fed loses the power to “buy now, pay later,” even if incrementally. Loss of trust in a fiat currency may not happen overnight (it took centuries for Rome!) but you don’t need a fancy econometric model to predict the consequences: higher inflation! Were inflation to re-appear and rates to move higher, the Fed might rue the casual way we now disperse trillions. So, just how long can the current monetary regime last? Your guess is as good as ours, but for entertainment if nothing else, we thought we’d share these historical observations: 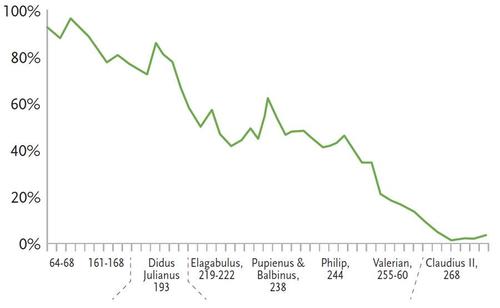 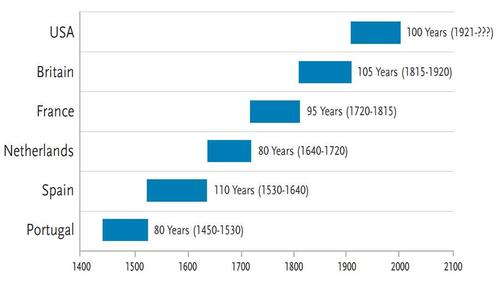 The upshot? The Fed will go on feeding the beast and capital markets will, for now, return the love. But we live in a “first derivative” world. A mere reduction in the rate of the deficit spending – say down to 10% of GDP from 15% – could trigger a double dip recession. We are, after all, in a New World, and the ships are burnt. Opportunities of the like rarely seen will present themselves and so will dangers. Until those opportunities represent an addressable target we intend to gather what yield we may while keeping our powder dry for the big game.