Will We Be In A Global Recession By The End of The Year?

EDITOR'S NOTE: When Deutsche Bank flashed its recession warning last week, other banks, like Bank of America, soon followed with their own similar warnings. Unlike most market experts who aren’t directly affiliated with banks, bank announcements tend to carry more weight. The reason for this is that major economic forecasts are often followed by business policy changes on the bank’s end. And the effort to turn the ship, so to speak, is often slow, laborious. and consensus-driven. The latest forecast featured below comes not from a bank but a think tank: the Peterson Institute for International Economics. What makes this forecast weighty is that it’s closely watched among lawmakers in Washington. The Institute predicts not just a recession but a “stagflationary recession” in the US sometime before the end of 2022. In addition, it’s also warning that this stagflationary recession will be followed by a “global” recession within the same time period. What are its reasons for such a dismal forecast? Read on.

The timeline for the looming stagflationary recession continues to creep forward, with the Peterson Institute for International Economics warning that global growth is set to slow dramatically, and warning that "an even more abrupt tightening of monetary policy that causes asset prices to fall sharply and consumers to pull back, combined with a greater slowdown in China than currently expected, could push the economy into recession by the end of this year."

Last week, Deutsche Bank spooked trading desks when it became the first major bank to predict a US recession would strike before the end of 2023, echoing a little seen call from BofA's CIO who predicted a recession as soon as the second half. But now, one of Washington's most closely watched think tanks believes that amid a sharp stagflationary slowdown in 2022, a global recession could arrive as soon as later this year.

Of course, the PIIE assessment was written prior to Tuesday's CPI print, which came in at the hottest rate in more than 40 years. The print was seen as cementing the odds of a 50bps Fed rate hike next month.

But that doesn't change much. Now that the Fed's rate-hike liftoff is in the rear-view mirror, it's worth bringing up this old chart, which shows that the countdown to every recession is triggered by a rate hike from the Fed. 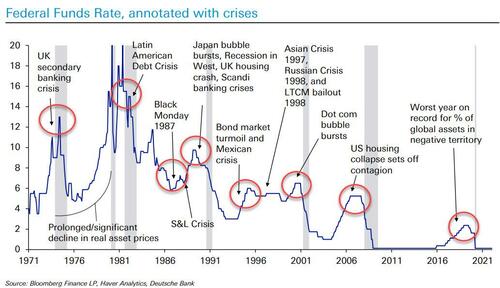 To be sure, the PIIE's base case is not that dire, and the think tank expects global growth to slow to 3.3% this year, down from 5.8%, while US growth is forecast to slow from 3% this year to 2% in 2023. "After a year of recovery from pandemic-related weakness, nearly all countries are seeing a significant slowing of economic growth," Karen Dynan, PIIE senior fellow and former U.S. Treasury Department chief economist, said in the report.

But it's the inflation outlook that's probably of greater interest to consumers, who are struggling with higher prices at the pump and at the grocery check-out. PIIE's outlook for price growth suggests that core inflation in the US will ease to 4.1% this year and ease further to 3% in 2023, which is still above the Federal Reserve’s 2% target. Consumer prices excluding energy and food skyrocketed 6.6% in March from a year earlier.

All of this adds up to one thing: stagflation. 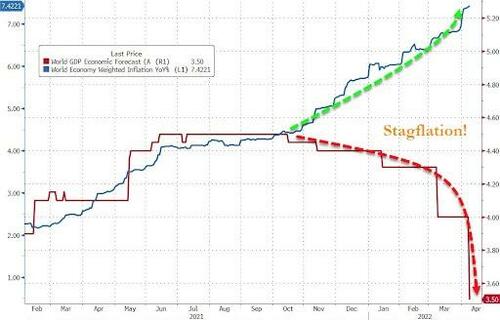 So, how will the Fed react once this inevitable reality has set in? Well, Bank of America noted last month, war is inherently stagflationary. 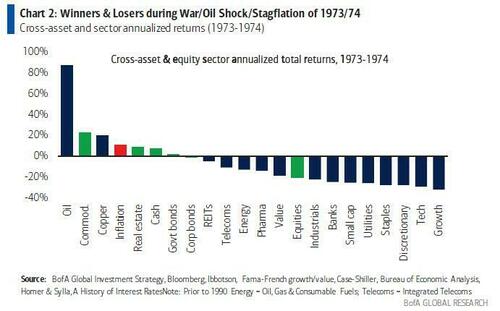 And as the reaction in equity markets has already suggested, investors are already looking through the Fed's series of 50 bp rate hikes, all the way to QE5 just as we noted last month.

Signs of Trouble In Both The U.S. And Global Economy Are Multiplying

The Global Economy Is Having To Pay For A Strong U.S. Dollar