Working Families Are Struggling In Turkey As Inflation Soars

EDITOR'S NOTE: In a frightening preview of what happens when inflation soars, working-class families in Turkey are struggling to get through their days, according to the New York Times. With inflation spiraling out of control in Turkey and the country’s currency losing value by the day, “The list of things that Bilal, a Turkish factory worker, and his family have had to give up is growing longer by the day. They stopped buying meat a year ago and recently had to cut back on using their gas heater and cooking oil, and on snacks for the children.” Turkey’s currency has lost half its value against the U.S. dollar in the last three months, and the costs of daily necessities are rising all the time. This is a heartbreaking story of a middle-class family and what happens when inflation takes hold of a country. To think about the possibility of this happening in the U.S. is truly terrifying.

As inflation soars and the value of Turkey’s currency plummets, one couple described how working families can’t make ends meet and have had to cut back on basic necessities as well as life’s smaller pleasures. 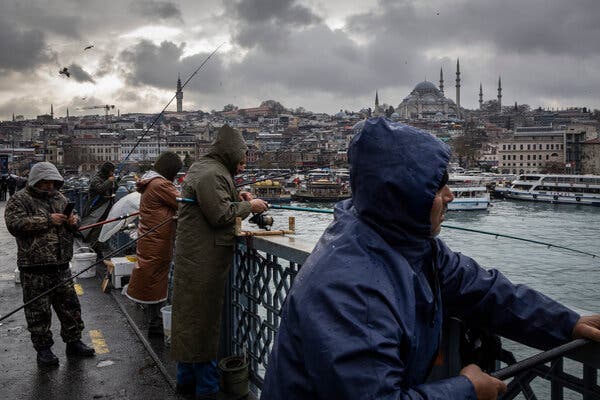 Men fished from the Galata Bridge in Istanbul. In the last three months, the Turkish currency has lost nearly half its value against the dollar and inflation has soared. Credit: Ivor Prickett for The New York Times

ISTANBUL — The list of things that Bilal, a Turkish factory worker, and his family have had to give up is growing longer by the day. They stopped buying meat a year ago and recently had to cut back on using their gas heater and cooking oil, and on snacks for the children.

He and his wife are already heavily in debt and with inflation spiraling higher over the past two months, they cannot make ends meet even after those sacrifices. So Bilal had to turn to his mother for financial help this month, cashing in two gold coins she had set aside for her grandchildren.

“Family is very important,” he said. “In our family, we do not consider it a loan.”

The Turkish economy has been in trouble for several years now, but in the last three months, its currency has lost nearly half its value against the dollar. Turks have been shaken by almost daily price increases in staples from flour and cooking oil to necessities such as electricity and gas. They are finding that their salaries and pensions can no longer pay for even the basics.

Bilal, 33, said he and his wife, Sevinc, 35, who have three children, wanted to explain how hard life has become for an ordinary working family in Turkey. But they did not want to use their full names for fear of repercussions in a country where criticizing the government can land a person in jail. 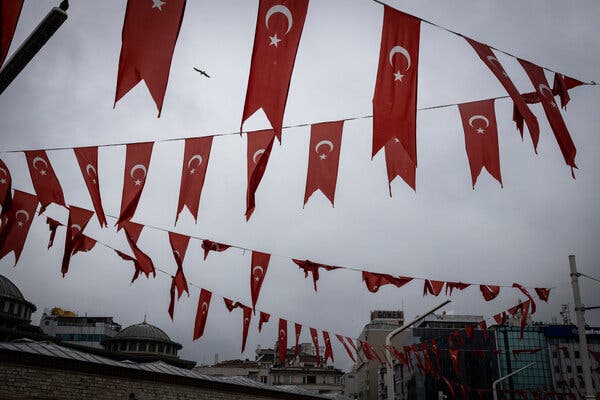 The latest downturn in Turkey’s economy followed an announcement last month by President Recep Tayyip Erdogan of a new economic plan, promising to turn around the decline. But instead, that announcement, including a promise to lower interest rates despite high inflation, set off the country’s worst currency crisis in two decades.

In a speech on Sunday, Mr. Erdogan lashed out at business leaders who had warned that his policies would destabilize and impoverish the country, and he vowed again to lower interest rates.

“Don’t seek different ways to attack the government,” he told them. “You cannot win a fight against us.”

But on Monday, Mr. Erdogan appeared to offer concessions, promising to compensate citizens who kept their savings in Turkish lira and give them an incentive to cash in their gold — which he claimed is worth hundreds of billions of dollars — for lira.

Many Turks like Bilal’s mother, who have experience dealing with economic difficulties, still store gold away at home to tide them through hard times.

Following Mr. Erdogan’s speech, the lira made a dramatic recovery from a sharp fall on Monday.

Bilal said life in Turkey, until recently, had been good for him in many ways. He left high school without graduating, but has been employed most of his married life, and has a mortgage on a three-room apartment and a car loan.

“Up until 2020, I can say life was beautiful,” he said. “Yes, I had debts, but I could pay them.” Lately, the economic upheaval began to take a toll on his life.

“Especially in the last seven to eight months, I really feel the economy is wearing me down,” he said. 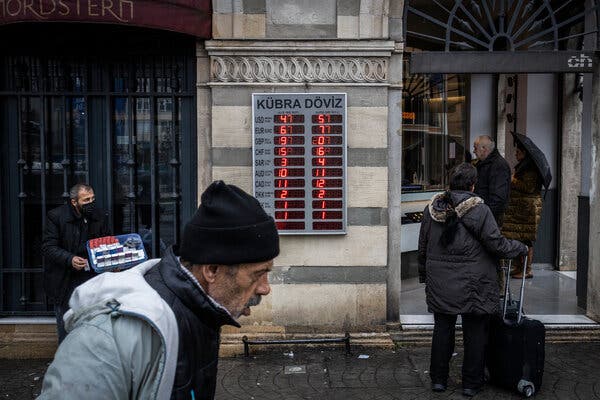 Bilal is the sole bread winner for the family; he earns little more than the minimum wage as a forklift driver in a factory that makes car parts in an industrial zone near Istanbul.

Sevinc is home caring for their 5-month-old baby. She had often worked, which helped. But she stopped last year when their younger daughter was struggling with school, she said. Sevinc, who manages the family’s money and does the shopping, said she noticed that things were getting more expensive over the last three to four years.

They survived the pandemic — Bilal was on half pay for a while, but the government made up the other half.

The crunch started this year as the Turkish currency, the lira, fell by nearly 50 percent against the dollar and inflation soared to 21 percent, according to official statistics. Unofficial estimates by economists put it much higher.

“Our spending is more than our income,” she said. “I cannot even think of a plan. Maybe it is going to be day by day.”

Turkey went through a similar economic downturn at the millennium. But then, under Mr. Erdogan, who came to power in 2003, the country enjoyed about a decade of uninterrupted growth, giving many Turks a taste of the middle-class lifestyle.

Economists say, however, that there has been a steady erosion of confidence in Mr. Erdogan’s stewardship of the economy as he has grown more authoritarian, intervened in the workings of the Central Bank, which is supposed to set interest rates independent of political pressure, and undermined the rule of law. 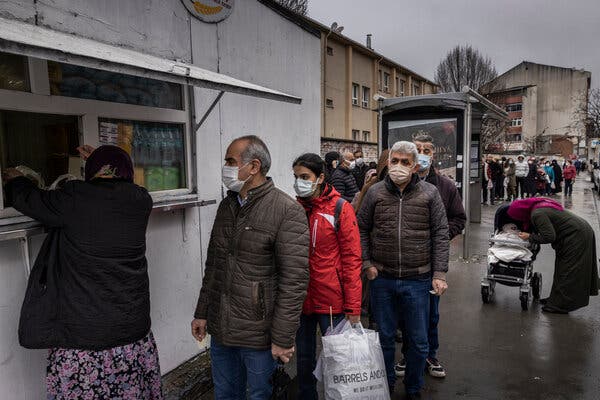 Still, growth brought new aspirations, and many Turks began to depend on credit. Bilal and Sevinc, who joined the work force in the mid-2000s, were among them.

They said they have an overdraft and their two credit cards were so maxed out that the bank blocked their account for three months earlier this year. Bilal paid off the bills by working extra time, but he is already back in debt.

He earns, with overtime, up to 4,000 lira a month, the equivalent of about $300. But half of that goes to pay the mortgage and car loan, and more to electricity and gas bills, which have increased twice in recent months. It is not enough to pay his credit card debts.

How did Turkey’s economy go so wrong? Before the pandemic, Turkey was trying to ward off a recession caused by mountainous debt, steep losses in the value of the lira and rising inflation. But the crisis ​has sped up in recent weeks​​, primarily because of President Recep Tayyip Erdogan’s policies.

Cutting interest rates. The most recent crisis has been caused by Mr. Erdogan's direct interference in monetary policy, including his insistence on lowering interest rates in the face of staggering inflation — precisely the opposite of what economists prescribe.

Inflation soars. Low interest rates put more money into circulation and tend to drive up prices. In Turkey, the inflation rate has surged past 20 percent amid Mr. Erdogan’s policies, and skyrocketing prices are causing misery among the poor and impoverishing the middle class.

The lira plummets. The country’s currency has nose-dived in recent weeks. Over the past year, the lira has lost more than 45 percent of its value. That steep decline means prices for much-needed imported goods keep rising, and people are struggling to afford food and fuel.

Public unrest grows. As the lira’s slide continues, sporadic protests have broken out around Turkey and the opposition parties have called for a series of rallies to demand a change of government. Scores of people have been detained for joining street protests.

Political pressure mounts. Facing an election in 2023 and sliding in opinion polls, Mr. Erdogan has doubled down on his financial approach and seems convinced that his strategy will enable the economy to grow out of its problems. Most economists, however, say a crash is more likely.

“I look for any lights left on by the children and turn them off,” Sevinc said. “We tell them not to use too much water and I use less cooking oil.”

She said she shopped mostly online for groceries because the nearest market is far, and she spends hours in the evenings scouring Trendyol, a popular online website, for cheap deals.

Her 8-year-old daughter complained when they had to cut back on snacks for the children, she said. They asked relatives for a winter coat for their 13-year-old daughter, who now is making do with a hand-me-down.

“We started to say ‘No’ more to the children,” Bilal said, adding: “The children know what is going on. They know about wealth and poverty.”

But he said he was sad that his own children are living through tough times.

“When we were children, we were able to buy whatever we needed. But now, we cannot give them whatever they want and they are going to grow up feeling bitter about the state,” Bilal said. 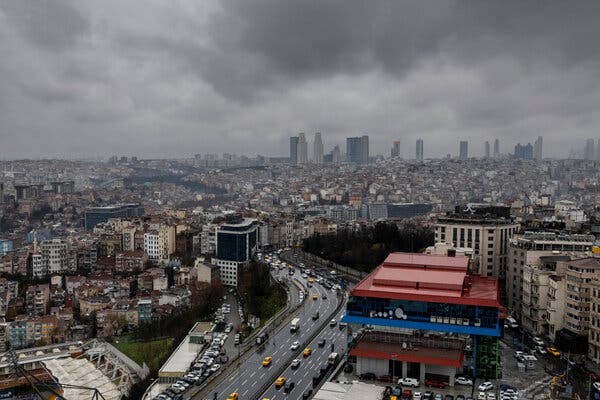 Stress over the economy has only aggravated the country’s mood, he said.

At work, colleagues still help each other out, but sharing, even of cigarettes, has ended.

“I used to put my pack on the table so everyone could take one,” Bilal said. “We are all like that. But now, we just take one out of our pocket,” he added. Quitting smoking was not an option, he said.

“We live in a country where the stress is so high that we cannot quit.”

Bilal said that after workers at the factory finished the night shift they used to go together to eat grilled sheep’s intestines, a Turkish delicacy. But they had given up on that small pleasure, too, in the last months. 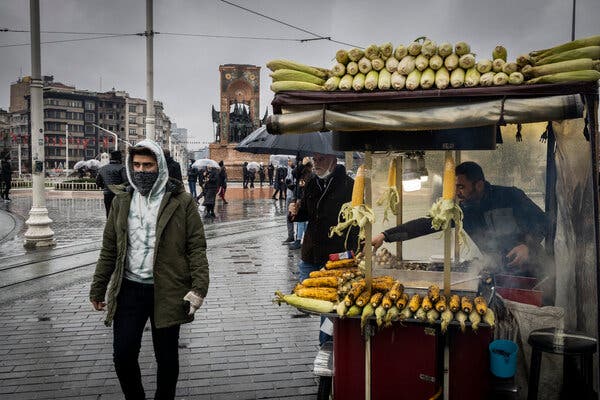 The family used to go out to eat together once a week, but it has been a year since they did that, Bilal said.

Rocking their infant son in his sleeping chair, the couple said his arrival had brought them some comfort and joy.

“The baby is helping,” Sevinc said.

Bilal said he wanted to believe the government when it promised that things would get better, but he worried that all this economic turmoil would destabilize Turkey.

“If it goes on like this,” he warned, “there will be chaos.”