Yellen Believes Soaring Inflation is Good For You

EDITOR NOTE: There’s a little confusion here on both sides of the debate. First off, anyone who’s concerned about inflation knows that over a year ago, when the Fed shifted toward an “average” rate of 2%, that critics were pointing out inflation could go as high as even 5% or higher to achieve this average. So, there should be no surprise if inflation rises to at least 3%. Now, the Biden administration’s budget projected 2.1% inflation in 2021 - 2022. Was this a misinformed calculation, or did someone forget to include the word “average” next to 2.1%? Shifting over to Janet Yellen, who claims that soaring inflation PLUS the additional $6 trillion in stimulus spending is good for the economy, well it all assumes that the Fed has the tools to rein in inflation if it starts spinning out of control, right? Here’s the issue with that. If by any chance the Fed, the Treasury, and others in the Biden administration are dead wrong about their capacity to control inflation, we’re all screwed--that is, except those who are invested in enough physical gold and silver to weather the harsh inflationary storm that’s brewing on the horizon.

Fast forward to this weekend, when Fed Chair Treasury Secretary Janet Yellen addressed our rhetorical concern, and following the G7 finmin meeting in London where the world's most advanced nations agreed to impose a 15% minimum corporate tax rate (with zero enforcement provisions), said that contrary to the Biden Budget, inflation could climb as high as 3% this year in what the WaPo said was "the first time the Biden administration projected what inflation could be through 2021", which by the way is dead wrong since Biden's budget just last week predicted only 2.1% CPI in 2021.

What the pathologically misleading Bezos Post meant to say is that this was the first time the Biden administration actually told the truth about how high the galloping US inflation will rise. And the only reason it did so is that in a time when home prices - and pretty much all other prices - are soaring at the fastest pace in US history, adhering to the laughable 2.1% CPI forecast would crush the credibility of everyone in this progressive administration.

Of course, the admission that inflation is about to turn red hot led to many other unpleasant questions that need to be answered, such as what will this to the economy, to purchasing intentions (which as we reported at the end of May just crashed the most on record), and last but not least, to the market, where the tiniest hint of inflation leads to immediate selloffs.

So, scrambling to preempt the barrage of questions come Monday, on Sunday Janet Yellen said that even though inflation is now at the highest level since Paul Volcker hiked rates to 20% and the US is about to issue another $3 trillion or so in debt just to fund existing stimulus programs, Joe Biden should push forward with his $4 trillion spending plans even if they trigger inflation that persists into next year and higher interest rates.

Why? Because soaring inflation is good for you.

“If we ended up with a slightly higher interest rate environment it would actually be a plus for society’s point of view and the Fed’s point of view,” Yellen said in an interview with Bloomberg. And yes, she really said that.

It wasn't immediately clear why rising rates, hence inflation and a drop in one's purchasing power is "a plus for society's point of view" but needless to say, this is the kind of idiotic drivel that Rudy von Havenstein and his cronies said some time in 1921, just around the time Weimer hyperinflation kicked in.

The debate around inflation has intensified in recent months, between those who, like Yellen, argue that current price increases are being driven by transitory anomalies created by the pandemic -- such as supply-chain bottlenecks and a surge in spending as economies reopen -- and critics who say trillions in government aid will fuel a lasting spike in costs.

Just to make sure there was no doubt which side of the argument Yellen is on, she said the recent rise in prices will subside and the U.S. labor market still has a ways to go before returning to pre-pandemic strength.

“We’re seeing some inflation but I don’t believe it’s permanent,” Yellen said at a press conference Saturday after the G-7 finance meeting in London. “We at least on a year-over-year basis will continue, I believe, through the rest of the year to see higher inflation rates -- maybe around 3%."

Yet even Yellen admitted that she could be wrong (narrator: "she is") and that officials are still watching price increases closely. “I don’t want to say this is mind absolutely made up and closed. We’ll watch this very carefully, keep an eye on it and try to address issues that arise if it turns out to be necessary,” she said, although again she added that personally she believes "this represents transitory factors,” and that "policy should look past such factors."

Yellen also made it clear that even though the world is now more indebted than at any time since World War II, it is about to take on even more debt, because you see, it's contained: “There is a concern among some about fiscal sustainability and an evident desire to begin to withdraw accommodation when things are back on track,” Yellen said, eyeing her former democrat buddy Larry Summers who has emerged as one of the biggest critics of "Biden's trillions." Yellen dismissed his concerns simply by saying that "we think that most countries have fiscal space.”

“I will not give up on the next packages,” Yellen said. “They’re not meant as stimulus, they’re meant as investments to address long-standing needs of our economy.”

Yes, she really said that, and yes she better be right about the "transitory" inflation part because we are about to get a whole lot more of it. Biden’s packages would add up to roughly $400 billion in spending per year, Yellen said, contending that’s not enough to cause an inflation over-run. Any “spurt” in prices resulting from the rescue package will fade away next year.  And, if she is wrong, well... it will be someone else' problem to mop it up.

And speaking of what's coming, keep in mind that last month we learned that headline CPI rose 4.2%, but it is the May print that could be an "absolute shocker", as discussed last week. 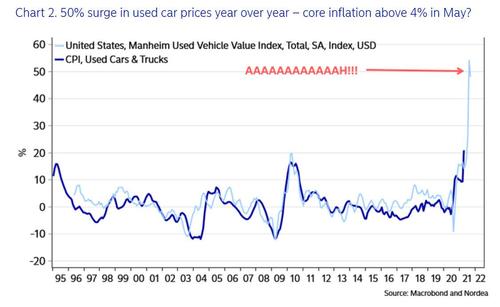 Yet despite surging prices, and despite soaring wages, the Fed has committed to only begin scaling back the $120 billion monthly pace of its asset purchases after there’s “substantial further progress” on inflation and employment. It is unclear how much higher inflation should rise for the Fed to be happy, but one thing is clear: we are now at a point where the government's welfare handouts and weekly unemployment benefits are distorting the picture dramatically, and the job market is growing far below expectations precisely because of Biden's ruinous fiscal policies, policies that keep the Fed's QE in play even longer and assure that not only is the wealth divide the widest it has ever been, but that when inflation really hits, it will truly be an "AAAAAAH!!!" moment.

But none of that is a concern to the phlegmatic 74-year-old: Yellen said that monetary policy makers can handle any potential rise in inflation if it sticks. “I know that world - they’re very good,” Yellen said in the interview. “I don’t believe they’re going to screw it up.”

This is the same clueless hack who in 2017 said she doesn't expect another financial crisis in "our lifetimes."