Yellen Proposes To Grab Back $2.5 Trillion in Taxes From Corporations

EDITOR NOTE: If Dallas Fed President Robert Kaplan is “concerned about excess risk-taking” going too far--in short, “moral hazard”--then it makes you wonder why the Fed put such a big carrot out there in the first place; an incentive that appears to be leading to a much bigger stick. Meanwhile, Treasury Secretary Yellen is coming to grips with the fact that US revenue is “at their lowest levels in generations,” and not enough to meet President Biden’s infrastructure plan. So, the administration’s solution, going by the name of Made in America Tax Plan, should give us some patriotic pride. After all, it’s taxation done, we’re guessing, American style. Big servings, like the size of Texas Toast as compared with your typical vegan California avocado toast. It’ll generate around $2.5 trillion in taxes over the next 15 years. Add the Fed’s money printing to this and the government will surely be able to “financialize” its way into generating enough wealth to implement its fiscal agenda. We get handed the bill, however, and as you already know, it’s a pretty big chunk of your savings, unless you’ve ditched your “savings” for a haven in non-CUSIP gold and silver.

Stocks just got hit with a double-whammy of hawkishness as Fed's Kaplan threatened to withdraw accommodation as the pandemic ends and Treasury's Yellen unveiled a plan to grab back $2.5 trillion in taxes from corporations.

Just a week after his last warning sank stocks, Federal Reserve Bank of Dallas President Robert Kaplan is at it again.

Last week he opined that:

This week he reiterated that fear and went further as stocks began to slip around 1115ET when Fed's Kaplan warned:

"I do worry about excesses and imbalances," adding that "failing to communicate Fed exit could stoke risk-taking." 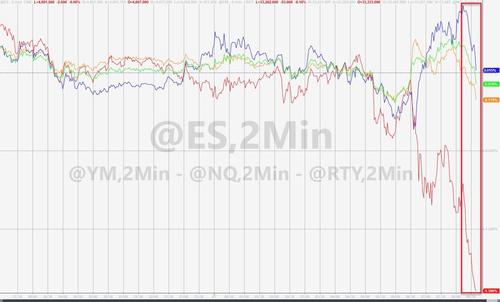 Stocks, most notably Small Caps, accelerated their losses as Kaplan went to say that The Fed "should withdraw some accommodation once the pandemic is over." 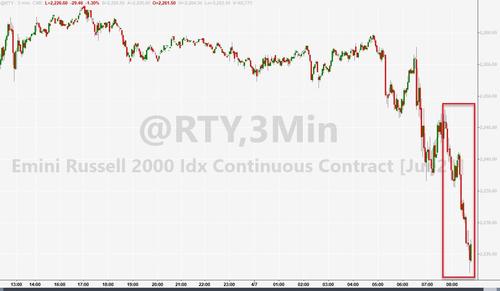 So now we know - Powell is the 'good cop' and Kaplan is the 'bad cop'?

But that was the least of it. 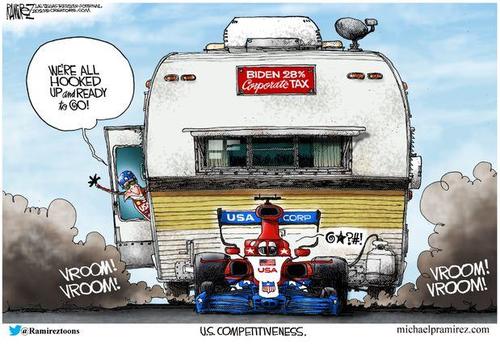 Losses were extended as Treasury Secretary Janet Yellen unveiled a detailed sales pitch for the Biden adminstration’s proposed new corporate-tax code, a plan that she said would be fairer to all Americans, remove incentives for companies to shift investments and profit abroad and raise more money for critical needs at home.

The plan, if enacted, would raise $2.5 trillion in revenue over 15 years. It would do so by ushering in major changes for American companies, which have long embraced quirks in the tax code that allowed them to lower or eliminate their tax liability, often by shifting profits overseas. The plan also includes efforts to help combat climate change, proposing to replace fossil fuel subsidies with tax incentives that promote clean energy production.

“Our tax revenues are already at their lowest levels in generations, and as they continue to drop lower we will have less money to invest in roads, bridges, broadband and R&D,” Yellen told reporters during a phone briefing.

“By choosing to compete on taxes, we’ve neglected to compete on the skill of our workers and the strength of our infrastructure. It’s a self-defeating competition, which is why we’re proposing this ‘Made in America’ tax plan. It changes the game we play.”

The plan would also repeal provisions put in place during the Trump administration that the Biden administration says have failed to curb profit shifting and corporate inversions, which involve an American company merging with a foreign firm and becoming its subsidiary, effectively moving its headquarters abroad for tax purposes. It would replace them with tougher anti-inversion rules and stronger penalties for so-called profit stripping.

The report also points to research showing corporations put more of their savings from the Trump tax cuts into share buybacks and dividend distributions than into new investments.

Biden’s plan also calls for eliminating all subsidies specifically for oil and gas embedded in the tax code, including deductions for drilling costs. The Treasury Department estimates that would raise about $35 billion in the coming decade.

As we detailed previously, Goldman's Kostin notes that the relative winners and losers of the next fiscal package will depend on the specific provisions. For example, traditional infrastructure investment would benefit industrial and construction materials companies, while green investment would expand the winners to include renewable energy companies. With regard to corporate tax reform, increases to the domestic statutory rate would primarily affect companies with high domestic business exposure and effective rates close to the statutory rate, which were the primary beneficiaries of the 2017 tax cuts. In sector terms, this includes Financials, Industrials, and Consumer firms. In contrast, proposals like a minimum tax rate on foreign earnings pose the greatest risk to low-tax “growth” sectors like Info Tech and Health Care and would have a much smaller impact on domestic-facing sectors 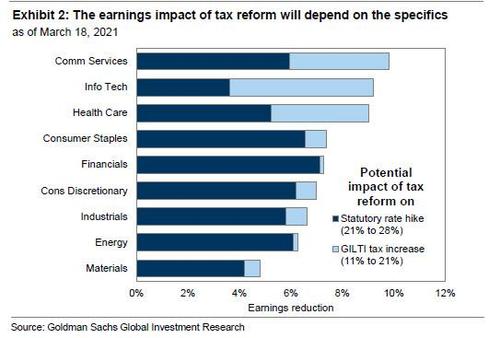 One big beneficiary of the plan would be the Internal Revenue Service, which has seen its budget starved in recent years. The Biden administration’s proposal would beef up the tax collection agency’s budget so that it can step up enforcement and tax collection efforts.

The tax proposals already face sharp opposition from Republican lawmakers and pushback from some moderate Democrats.

Joshua Bolten, chief executive of the Business Roundtable, saying in a statement this week that the plan “threatens to subject the U.S. to a major competitive disadvantage.