EDITOR'S NOTE: When it comes to forecasting major economic shifts, we pay attention to several indicators, piecing together clues that hopefully will provide a comprehensive and reliable picture. The 2-year and 10-year yield curve is just one indicator of many, and that curve has been inverted for months. Is there a way to fine-tune its reading? According to the analyst below, there are several other yield curves we should be paying attention to such as the 3-month and 30-year, or the 5-year and 30-year. These yields, neither of which don’t typically appear on the mainstream radar, are giving off strong signals. And those signals may be confirmed as soon as the Q4 earnings season begins in January 2023.

Watch the 3m30y and the 5y30y segments of the yield curve for early signs that a recession is coming into view. Extra caution will be required at this point as equities and equity earnings have yet to adequately price in a downturn.

The yield-curve’s utility as a recession indicator has been a hot topic in recent years. It has an almost unblemished record of forecasting recessions, with the 2s10s curve only giving one false positive in the postwar years. However, it is limited in its usefulness due to the variability between when the curve inverts and when the recession hits, which ranges between six months and two years.

Overall, the yield curve is a bit of red herring when it comes to recession prediction. A much broader suite of indicators is more effective in giving a more timely sign of an economic contraction, with one next year looking highly likely.

Nonetheless, it’s not the yield-curve inversion that’s the more imminent sign of a recession, but the subsequent re-steepening. Even then, not all parts of the yield curve are equal.

If history is a guide, when 3m30y curve meaningfully steepens and then the 5s30s un-inverts, that will be a sign an NBER recession is as little as two months away. 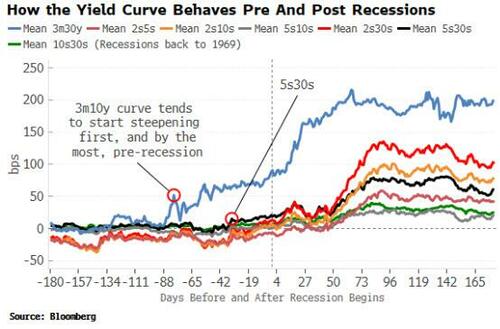 The 5s30s curve also tends to be one of the first to un-invert before a recession, about six-to-eight weeks prior.

At the moment, the 3m30y curve is still flattening and 5s30s is still inverted, suggesting a recession is at least a few months away. 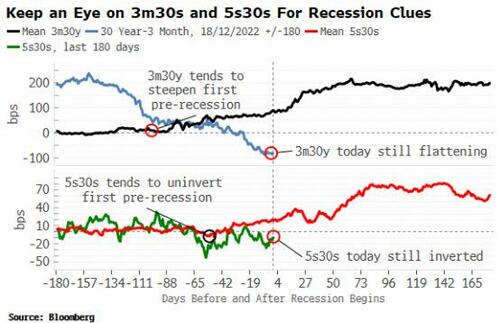 But investors will need to remain vigilant. These trends can change quickly, and recessions always surprise by the rapidity of their onset.