Explained: How The Fed Will Trigger Another Banking Crisis

EDITOR NOTE: Our frequent coverage on the repo market is, no doubt, always a technical read. One takeaway from all of this is that banks and larger investors are parking their money at the Fed’s facility at record rates, as there are very few investment-worthy places to stash their cash. The Fed has been working to create a disincentive for investors and banks to move cash to the repo market. Instead of draining liquidity from the RRP facility, it instead surged an astonishing 50%, increasing by up to $757 billion. It may not seem apparent at first, but this is just one of many minuscule yet potent complexities that can potentially destabilize markets. If you follow the thread of details below, you’ll see how the Fed’s responsive actions to these issues may have just set forth our path toward yet another liquidity crisis. Are you ready for a Fed-induced Financial Lockdown? Prepare now with non-CUSIP gold and silver, call 800-474-9159.

Last week, amid the fire and brimstone surrounding the market's shocked response to the Fed's unexpected hawkish pivot, we noted that there were two tangible, if less noted changes: the Fed adjusted the two key "administered" rates, raising both the IOER and RRP rates by 5 basis points (as correctly predicted by Bank of America, JPMorgan, Wrightson, Deutsche Bank and Wells Fargo while Citi, Oxford Economics, Jefferies, Credit Suisse, Standard Chartered, BMO were wrong in predicting no rate change), in an effort to push the Effective Fed Funds rate higher and away from its imminent rendezvous with 0%. 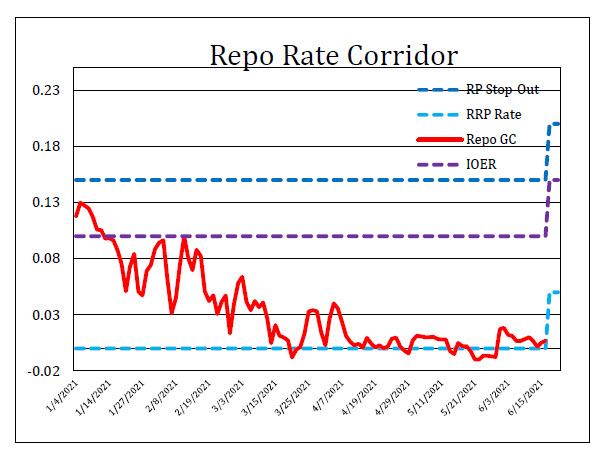 What does this mean? As Curvature Securities repo guru, Scott Skyrm wrote last week, "clearly the Fed intends to move overnight rates above zero and drain the RRP  facility of cash." Unfortunately, the end result would be precisely the opposite of what the Fed had wanted to achieve. 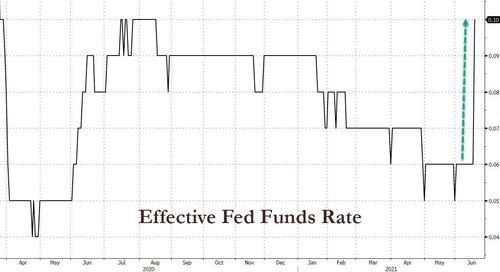 The problem, as Skyrm warned, is that the Fed's technical adjustment would do nothing to ease the RRP volume:

Bottom line: with both market rates and RRP at .05%, there's really no economic incentive for cash investors to move cash to the Repo market. Or, as we summarized, "the Fed's rate change may have zero impact on the Fed's reverse repo facility, or the record half a trillion in cash parked there."

In retrospect, boy was that an understatement, because just one day later the already record usage of the Fed's Reverse Repo facility spiked by a record 50%, exploding to a staggering $756 billion (it closed Friday at $747 billion) as the GSEs. 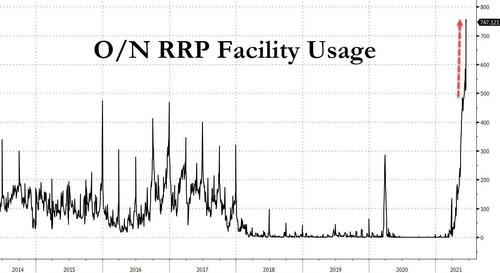 Needless to say, flooding the Fed's RRP facility and sterilizing reserves is hardly what the Fed had intended, and as Credit Suisse's own repo guru (and former NY Fed staffer) Zoltan Pozsar wrote in his post-mortem, "the re-priced RRP facility will become a problem for the banking system fast: the banking system is going from being asset constrained (deposits flooding in, but nowhere to lend them but to the Fed), to being liability constrained (deposits slipping away and nowhere to replace them but in the money market)."

What he means by that is that whereas previously the RRP rate of 0.00% did not reward allocation of inert, excess reserves but merely provided a place to park them, now that the Fed is providing a generous yield pick up compared to rates offered by trillions in Bills, we are about to see a sea-change in the overnight, money-market, as trillions in capital reallocate away from traditional investments and into the the Fed's RRP.

In other words, as Pozsar puts it, "the RRP facility started to sterilize reserves... with more to come." And just as Deutsche Bank explained why the Fed's signaling was an r* policy error, to Pozsar, the Fed also made a policy error - only this time with its technical rates - by steriling reserves because "it’s one thing to raise the rate on the RRP facility when an increase was not strictly speaking necessary, and it’s another to raise it “unduly” high – as one money fund manager put it, “yesterday we could not even get a basis points a year; to get endless paper at five basis points from the most trusted counterparty is a dream come true."

He's right: while 0bps may have been viewed by many as too low, it was hardly catastrophic for now (Credit Suisse was one of those predicting no administered rate hike), 5bps is too generous, according to Pozsar who warns that the new reverse repo rate will upset the state of "singularity" and "like heat-seeking missiles, money market investors move hundreds of billions, making sharp, 90º turns hunting for even a basis point of yield at the zero bound – at 5 bps, money funds have an incentive to trade out of all their Treasury bills and park cash at the RRP facility."

Indeed, as shown below, bills yield less than 5 bps out to 6 months, and money funds have over $2 trillion of bills. They got an the incentive to sell, while others have the incentive to buy: institutions whose deposits have been “tolerated” by banks until now earning zero interest have an incentive to harvest the 0-5 bps range the bill curve has to offer. Putting your cash at a basis point in bills is better than deposits at zero. So the sterilization of reserves begins, and so the o/n RRP facility turns from a largely passive tool that provided an interest rate floor to the deposits that large banks have been pushing away, into an active tool that "sucks" the deposits away that banks decided to retain. 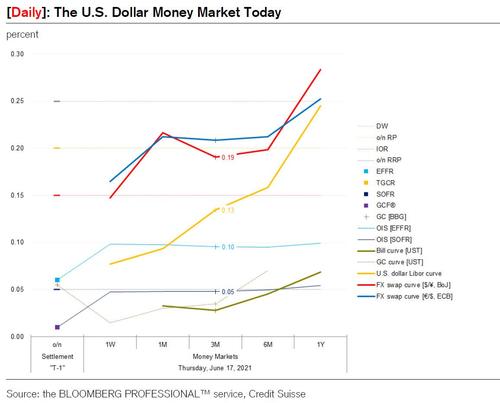 To help readers visualize what is going on, the Credit Suisse strategist suggest the following "extreme" thought experiment: most of the “Covid-19” deposits currently with banks go into the bill market where rates are better. Money funds sell bills to institutional investors that currently keep their cash at banks, and money funds swap bills for o/n RRPs. Said (somewhat) simply, while previously the Fed provided banks with a convenient place to park reserves, it now will actively drain reserves to the point where we may end up with another 2019-style repo crisis, as most financial institutions suddenly find themsleves with too few intraday reserves, forcing them to use the Fed's other funding facilities (such as FX swap lines) to remain consistently solvent.

This process is not overnight. It will take a few weeks to observe the fallout from the Fed's reserve sterilization.

And here is why the problem is similar to the repo crisis of 2019: soon we will find that while cash-rich banks can handle the outflows, some bond-heavy banks cannot. As a result, Zoltan predicts that next "we will notice that some banks (those who can not handle outflows) are borrowing advances from FHLBs, and cash-rich banks stop lending in the FX swap market as the RRP facility pulled reserves away from them and the Fed has to re-start the FX swap lines to offset."

Bottom line: whereas previously we saw Libor-OIS collapse, this key funding spread will have to widen from here, unless the Fed lowers the o/n RRP rate again back to where it was before.

Or, as Zoltan summarizes, "It’s either quantities or prices" - indeed, in 2019 the Fed chose prices over quantities, which backfired, and led to the repo crisis which ended the Fed's hiking cycle and started "NOT QE." While the Fed redeemed itself in February, when it expanded the usage of the RRP without making it liability-constrained as it chose quantities over prices - which worked well - last Wednesday, the Fed turned “unlimited” quantities into “money for free” and started to sterilize reserves.

Bottom line: "we are witnessing the dealer of last resort (DoLR) learning the art of dealing, making unforced errors – if the Fed sterilizes with an overpriced o/n RRP facility, it has to be ready to add liquidity via the swap lines…"

Translation: by paying trillions in reserves 5bps, the Fed just planted the seeds of the next liquidity crisis.