EDITOR NOTE: The broader market has been advancing in a powerful and seemingly robust manner, but what exactly is it advancing toward? Besides record highs, the market is heading with breakneck speed into a scenario where 14 million people are about to lose unemployment benefits, and 30 million households face eviction. In short, the equity markets are about to hit a wall called the end of "§9048 Temporary Government in the Sunshine Act relief" via HR748 "The CARES Act.” With no further stimulus in sight and the Freedom of Information Act no longer suspended, we are about to discover what has been fueling the stock markets' gravity-defying rally. Will the weight of the economy finally crush the waves of optimistic speculation fueling asset prices? If so, you don’t want to be anywhere near it, lest you should position yourself in a way that avoids a total wipeout with non-CUSIP Gold & Silver.

While markets remain on edge over the sudden tension between the Treasury and the Fed, following Mnuchin's surprise notice to Powell that the Treasury would let 8 of the key 13(3) "emergency" programs currently in place (including the critical for the bond market Corporate Credit facilities, PMCCF and SMCCF) at the Fed expire on Dec 31... 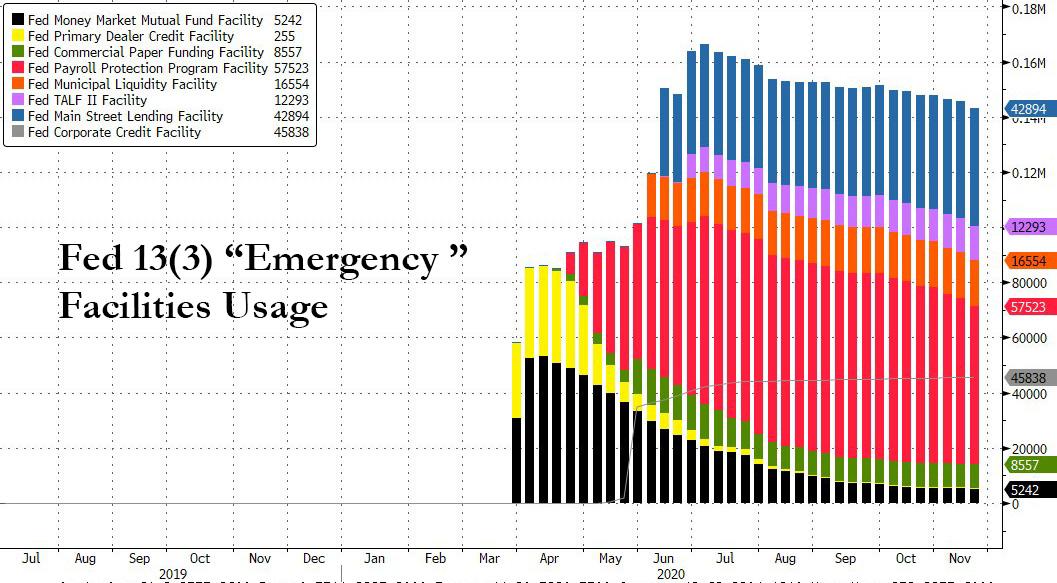 ... which also threatens the continuation of Helicopter Money into 2021 as the only reason the Fed has been able to monetize all US issuance this year while sending stocks soaring has been the close cooperation between the Fed and Treasury, another, more important "expiration" will take place on Dec 31, and will likely have far more profound consequences for the broader US population.

Here's why: on Dec 31 is when many of the key provisions in the CARES Act are set to expire if there is no action from Congress. All else equal, some 12 million American will likely lose access to their Emergency unemployment benefits activated in the aftermath of the covid pandemic, which alone could be a drag of up to 1.5% to growth in 1Q according to Bank of America. Additionally, the concurrent expiration of eviction moratorium, mortgage forbearance programs, and suspension of student loan payments could all be headwinds early next year, creating further obstacles.

The CARES Act expanded unemployment insurance eligibility and duration during the pandemic. Of this, the Pandemic Unemployment Assistance (PUA) program was the largest component, giving unemployment benefits to workers who are normally ineligible for regular state UI programs such as contract and self-employed workers. The PUA gave these workers 39 weeks of unemployment benefits. Meanwhile the Pandemic Emergency Unemployment Compensation (PEUC) program provided 13 additional weeks of benefits to those that exhausted regular state UI benefits. These programs will expire on December 26th.

According to the latest DOL data, there are currently over 21 million unemployed workers receiving UI benefits of which 13.6 million are enrolled in either PUA or PEUC; these are shown in red and green in the chart below.

According to analysts at the Century Foundation, roughly 12 million workers enrolled in PUA or PEUC will see their UI benefits cut off at year-end, and based on BofA calculations, this would roughly translate into an income shortfall of $39BN in 1Q if these workers are unable to find work or alternative income support. BofA also calculates that based on its work on fiscal multipliers, income loss of $39BN would translate into a 1.2% hit to growth on an annualized basis in 1Q 2021.

Beyond the direct hit to those losing their benefits at year-end, many that are currently on regular state UI programs will exhaust their eligibility and be left without a safety net. A back of the envelope calculation suggests an additional 2.4MM  workers who are currently on regular UI benefits will exhaust all available UI resources by 1Q of next year, which would amount to roughly an $8BN income loss or a drag of 0.3% to growth.

In total, some 14.4 million workers will lose their unemployment benefits on Dec 31, resulting in a total hit to the economy of almost $50BN, and without any additional UI support, BofA estimates the income loss could be a drag of up to 1.5% to growth in 1Q 2021. It gets worse as there could be a second mini-cliff in 2Q if there is no additional stimulus as workers on extended UI benefits in select states exhaust their aid.

The CARES Act also provided some temporary payment relief: it prohibited landlords with federal guaranteed mortgages from evicting tenants until December 31st. According to a survey run by the Urban Institute, 1/3rd of landlords reported not being paid rent in full in September. This implies roughly 30 million renter households will be at risk of eviction once the moratorium expires. As BofA adds, homeowners with federally guaranteed mortgages could request loan forbearance up until December 31st, while those who requested and received forbearances prior to the deadline would be able to delay mortgage payments up to a year. Separately, according to the Mortgage Bankers Association, loans in forbearance stood at 5.7% in the week ending November 15, which roughly translates to 2.7 million homeowners in some sort of forbearance plans.

While it's difficult to quantify the growth impact from these provisions expiring, BofA expects it to have a meaningful impact if consumers are unable to keep current on their debt. According to a study done by Collison and Reed (2018), the value of avoiding an eviction is approximately $8,000 per household. Meanwhile, studies on foreclosures showed that foreclosure-related sales had prices about 27% lower than comparable properties and each foreclosure lowered the selling price of nearby non-foreclosure properties by 1%.

In short, the Dec 31 expiration date means that immediately thereafter, there will be a nontrivial risk that many households will be unable to pay their debts. The latest Household Pulse Survey from the Census Bureau shows that close to 30% of renters and roughly 12% of homeowners with mortgages have slight-to-no confidence that they will be able to make next month's payment. 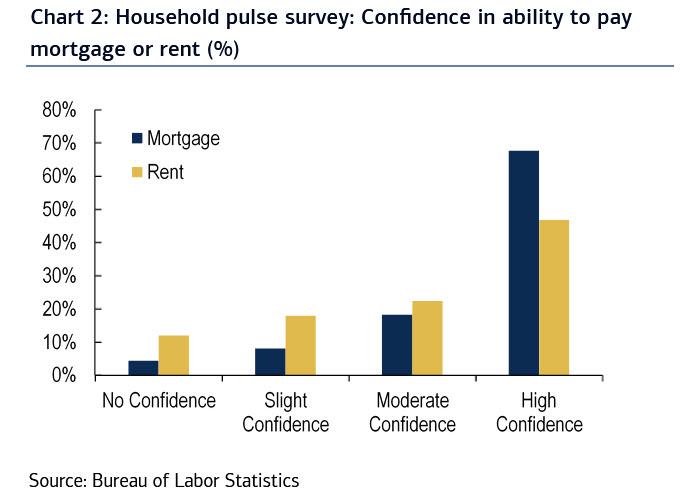 Last, consumers with student debt will have to resume payments in January. According to a study done by the NY Fed, the payment freeze during the pandemic saved borrowers roughly $7BN per month. All told, with various moratoria ending, debt payments coming due could be a major headwind for the economy at the start of next year.

What is most concerning about the expiration of various CARES programs is that starting Jan 1, the economy will be operating without a safety net. However, according to BofA, this is likely to be short-lived, as Congress and the new Biden administration are expected to strike a deal on a new stimulus package of $500bn-$1tn shortly after the inauguration (Goldman however recently cuts its estimate to just $700BN). And while any new package should be able to offset the drag and boost growth by 2.5% in 2021 (per BofA estimates), any delays and snags could lead to a second major economic hit to the US economy. Already JPMorgan expects a "doube-dipping" 1% drop in Q1 GDP, a decline which will only get worse should the various government subsidies not be extended in early 2021.