3.3 Million - The Pace At Which Americans Are Losing Their Jobs is Absolutely Breathtaking

Unemployment numbers are an indicator of "Overall Economic Health" because they are directly correlated with consumer spending - which means monetary policies from the Fed are typically created around this number.

The pace at which Americans are losing their job is BREATHTAKING. Next week when people realize this is not a short-term thing, these numbers will start effecting the stock-market.

The good news is the unemployment benefits won't hurt the federal gov't because they can just print money!

However, If you think 3.3 million unemployment claims is CRAZY now, wait until this number quadruples in the next few weeks. Read More below:

According to the Wall Street Journal, the largest number of new claims for unemployment benefits ever recorded in a single week prior to this year was 695,000 during the week that ended October 2nd, 1982.

So that means that what we are now witnessing is completely unprecedented, as The US Department of Labor reports a stunning increase of 3.283 million people sought initial jobless claims last week amid the virus lockdowns (almost double the expectation of a 1.7million increase). 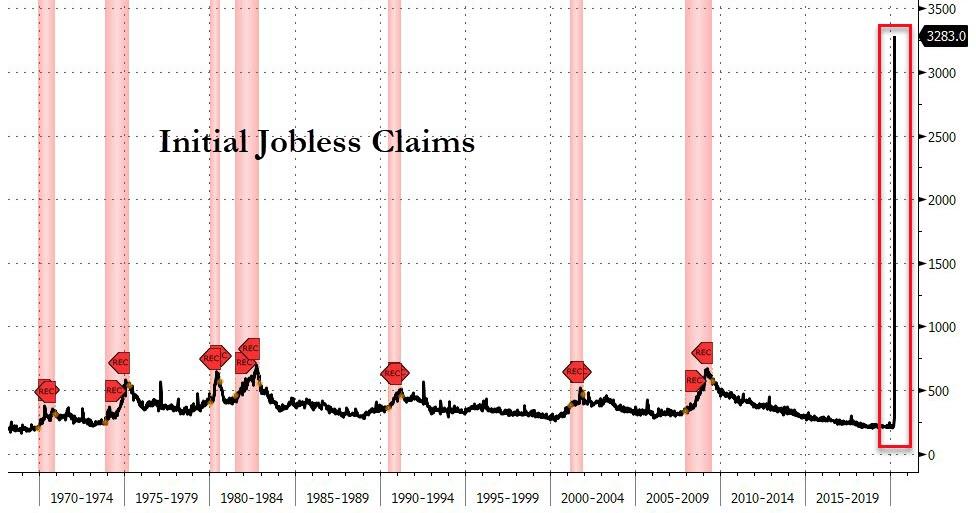 The Bureau of Labor Statistics says that nearly every single state cited Covid-19 in its reporting.

Service industries were hit hard, but the BLS says other industries were cited: health care and social assistance, arts, entertainment and recreation, transportation and warehousing, and manufacturing.

Only three states had estimated claims.

We know that several states’ unemployment websites crashed, were running slow, or malfunctioned in recent weeks as an unprecedented number of applicants tried to file at the same time.

The states with the biggest jump in advance claims from the prior week were Pennsylvania, Ohio and New Jersey.

As Saxo Bank's Christopher Dembik also warns, keep in mind that an undefined number of claims went unreported as states’ unemployment insurance program offices were overwhelmed by the massive number of applications both by phone and online. Some states even informed that their phone lines was saturated and their website crashed due to high demand. It means that next week’s data might be very ugly as well, or even worse.

Look at the situation in America’s four largest state economies that represent roughly 1/3 of US GDP:

So what will this mean for the unemployment rate?

As Bloomberg wrote earlier, St. Louis Fed President James Bullard made a shocking prediction the other day that U.S. unemployment may hit a 30% in Q2. St. Louis Fed economist Miguel Faria-e-Castro published a blog post today explaining the back-of-the-envelope methodology used to arrive at a 30% unemployment rate. He noted that about 67 million people work in jobs with high risks of layoffs, including sales, production and food preparation. In addition, 27 million people work in businesses that require close physical contact, such as barbers and restaurant wait staff.

Considering the overlap between those two groups, Faria-e-Castro averaged them and concluded that 47 million people could lose their jobs. Add the current 5.7 million unemployed workers and divide by the 165 million people in the labor force, and he got 32% unemployment. 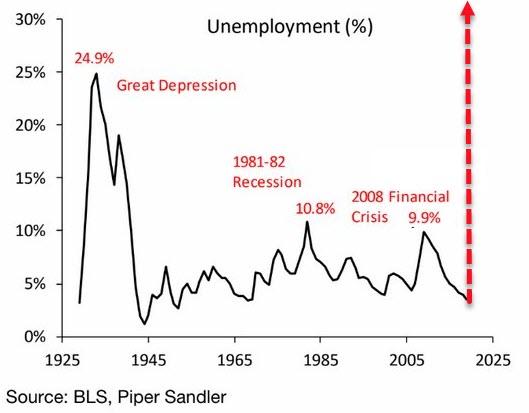 Of course, there are many caveats. About 10 million people work in education and health care, and they’re less likely to be laid off because their services are needed. So by simply deducting that the peak of jobless rate falls to 10.5%. Also, the 32% scenario assumes no fiscal stimulus to help small businesses - and Congress just passed such a plan. And then there’s the reality that employers may just send workers home with pay instead of laying them off.

However, as Powell said on The Today Show this morning - "it would appear we are already in recession" -$2 trillion bailout or not!?

In recent days, as  Michael Snyder notes,  so many newly unemployed Americans have been trying to file for unemployment benefits that it has been crashing websites all over the country.

For example, a newly unemployed worker in Michigan named Aaron Garza never was able to file for benefits through Michigan’s unemployment website although he kept on trying throughout Monday and Tuesday…

When Aaron Garza was dismissed this week from his job as a parts specialist at a Toyota dealership in Grand Rapids, Michigan, he joined a tidal wave of unemployed people swamping systems to help them and straining state finances to the breaking point.

On Monday, Garza went to Michigan’s unemployment website and tried logging on to apply for benefits electronically. After 30 minutes, he was able to sign on, but by the time a verification code was sent to his phone 25 minutes later, he had already given up. As of Tuesday afternoon, he still hadn’t been able to get through.

Last week, 108,000 workers filed for unemployment benefits in the state of Michigan.

That is 20 times more than normal.

In Louisiana, things are even worse.  If you can believe it, the number of people filing for unemployment benefits is more than 40 times higher than usual…

Louisiana has one of the highest per capita counts of coronavirus cases in the U.S. Democratic Gov. John Bel Edwards has ordered nonessential businesses to close, limited restaurants to takeout and delivery, banned gatherings over 10 people and directed residents to remain at home.

And in California, Governor Gavin Newsom says that a million residents of his state have filed for benefits “just since March 13”…

California Gov. Gavin Newsom said Wednesday that the state has seen 1 million unemployment claims in less than two weeks as the coronavirus pandemic has led to businesses being shut down across the state.

“We just passed the 1 million mark, in terms of the number of claims, just since March 13,” Newsom said.

Of course similar things are happening all over the world.  Approximately one-third of the entire population of the globe is currently under some sort of a lockdown order, and that means that hundreds of millions of workers are sitting at home not working.

Here in the United States, so many people are already absolutely sick and tired of being idle at home, but the truth is that it looks like this pandemic is just getting started.